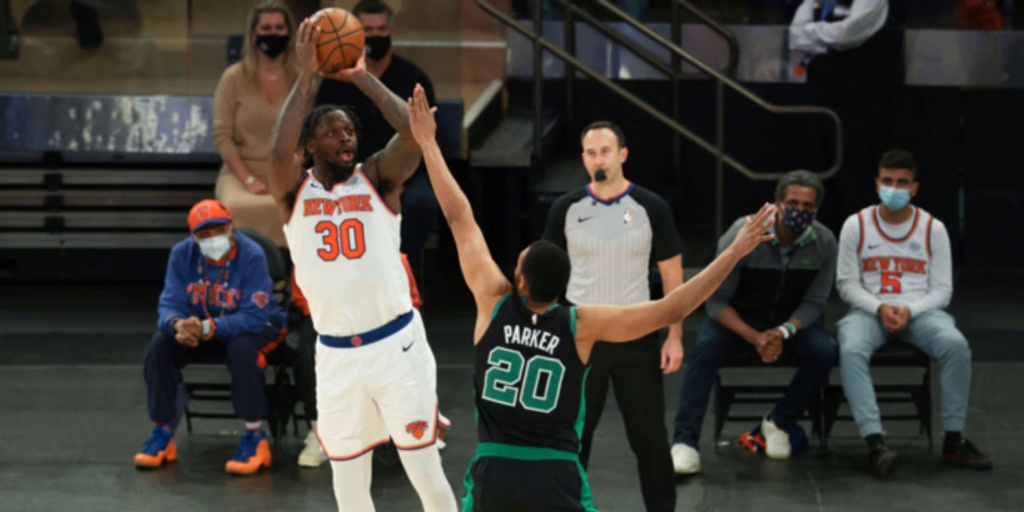 Randle, Knicks beat Celtics to clinch No. 4 seed in East

Randle capped his All-Star season with 20 points, seven rebounds and seven assists, and the Knicks beat the Boston Celtics 96-92 on Sunday to clinch the No. 4 seed in the Eastern Conference.

RJ Barrett scored 22 points for the Knicks, who won their third straight to finish 41-31 and set up a first-round series with the Atlanta Hawks. The Knicks are headed to the playoffs for the first time since winning the Atlantic Division title in 2012-13.

They needed a win Sunday to assure themselves of playing at Madison Square Garden next weekend and got plenty of help from the Celtics, who were already locked into the play-in tournament at the No. 7 spot and rested all their top players.

Boston cut a 21-point deficit to three in the final minutes, but Nerlens Noel had two big blocked shots before Randle hit a free throw to close the scoring.

The Knicks entered the day tied with the Hawks, who played later Sunday against Houston, but own the tiebreaker if they finish with the same record after sweeping the three-game season series.

The Knicks were one of the NBA's biggest surprises in Tom Thibodeau's first season after having little to no playoff expectations outside the organization. But they play the rugged defense characteristic of his teams and got much-improved play from Randle and Barrett to strengthen the offense as the season went on.

Boston was a disappointment, finishing 36-36, but can still make the postseason with a win in the play-in tournament. The Celtics will host No. 8 Washington on Tuesday.

Jabari Parker scored 18 points for Boston, which led 24-23 after one quarter but then shot 4 for 20 in the second.

The game was tied at 35 before the Knicks closed the first half with a 19-4 kick, including a pair of 3-pointers from Alec Burks. The second triggered a 12-0 surge to finish it, extending the lead to 54-39.

Celtics: Coach Brad Stevens said the team will find out more about the status of the players who sat out Sunday when they practice Monday. He said some are potentially available but others not.

Mike Gorman and George Kalinsky will be honored with the 2021 Hall of Fame's Curt Gowdy media awards that Breen earned for 2020. Gorman is celebrating 40 years broadcasting Celtics games. Kalinsky has been the official photographer of Madison Square Garden since 1966.

“As I’ve said all along, he’s our engine. He’s had a terrific season and for me personally I’m glad that he’s being recognized," Thibodeau said. "But the most important thing is the impact he’s had on winning and that’s where I want our focus to be. There’s a lot of people who can get stats in this league and it doesn’t impact winning.”