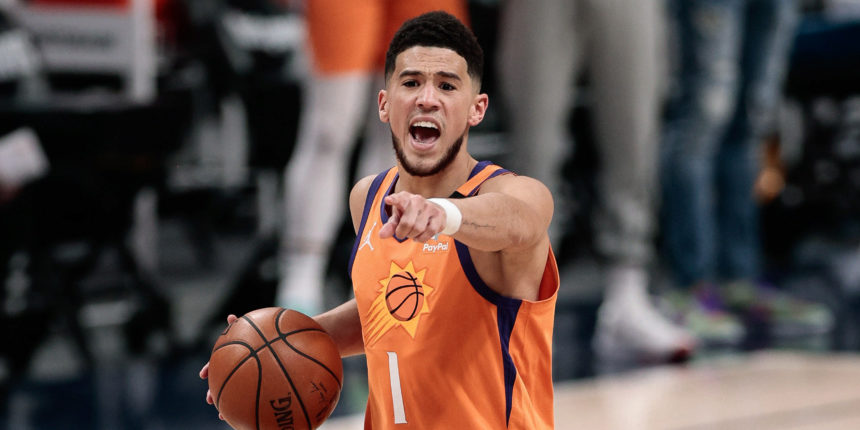 Devin Booker and the Phoenix Suns spoiled Nikola Jokic's MVP celebration with a 116-102 victory over Denver on Friday night in Game 3 that put “The Joker” and the rest of the reeling Nuggets on the brink of a quick second-round exit.

The @Suns backcourt was LIGHTS OUT in Game 3 💥

Booker scored 28 points and teamed with Chris Paul to lead a steady offensive onslaught that countered Jokic's triple-double of 32 points, 20 rebounds and 10 assists.

A SUPERHUMAN effort from Jokic.

With their sixth straight victory, the second-seeded Suns took a 3-0 lead in the best-of-seven series. Game 4 is Sunday at Ball Arena.

Paul had 27 points, eight assists and three steals for the Suns, who pulled away after halftime for the third straight time. All five Phoenix starters scored in double figures.

They are a one win away from their first trip to the Western Conference Finals since 2009-10 — which was the last time Phoenix made the playoffs.

Monte Morris scored 21 off the bench for Denver.

The third-seeded Nuggets, who reached the conference finals last year, are on the brink of getting swept in a playoff series for the first time since the Lakers bounced them out of the first round in 2007-08.

Jokic dedicated his MVP award to his teammates during a raucous pregame ceremony that coach Michael Malone had hoped would energize his team that's lost by 17, 25 and now 14 points.

The Nuggets first MVP was mostly MIA early on as the Suns shot a sizzling 74.46% in jumping out to a 37-27 lead after one quarter. Jokic scored seven points in that quarter but none until the 4:45 mark. He also missed two of three free throws.

Malone, who accused his team of quitting after a blowout loss in Game 2, said before tip-off that he liked his team's resiliency.

“I don’t know if I’ve ever been around a better team that can get up off the mat, find a way to get back in the fight and win the fight,” Malone said of his team that overcame two 3-1 deficits in the bubble last year.

He said all Phoenix did by sweeping the first two games in the desert was hold serve. “So, now we have to return the favor,” Malone said, “and make this a series.”

They couldn't, and now the Suns can sweep them right out of the postseason.

Suns: Phoenix led by double digits much of the first half but went cold over the final 90 seconds of the second quarter, allowing the Nuggets to pull to 59-55 at halftime. ... The Suns shot 50% in the first half both from beyond the arc and from the field, and they made all 11 of their free throws.

Nuggets: The Nuggets missed their first seven shots after halftime, sapping them of the momentum they took into the break by closing on a 6-0 run. ... Michael Porter Jr., who tweaked his back in the series opener, had another tough time, shooting 5 for 13 from the floor for 15 points. Will Barton added 14 in his second game back from a hamstring injury.

The biggest crowd at Ball Arena since the pandemic began included Denver Broncos tight end Noah Fant, guard Dalton Risner and kicker Brandon McManus wasn't mentioned along with the other two when they were shown on the big screen. But in the second half, the cameras came back to him and he put on a show by chugging a couple of beers for cheers.