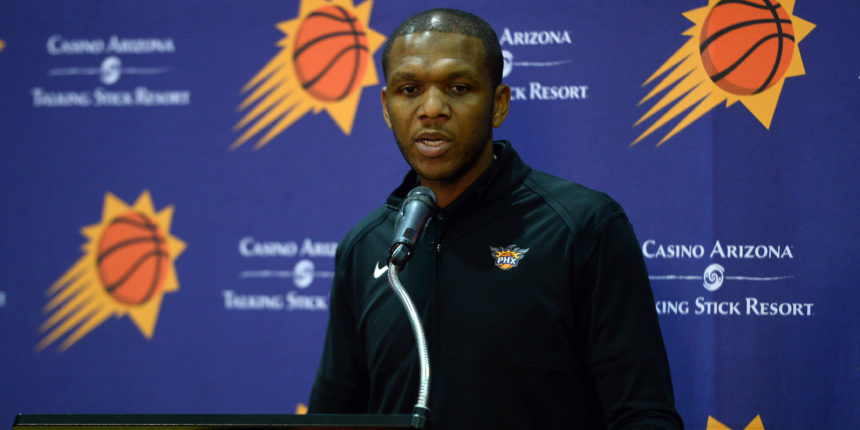 Examining the NBA GMs who assembled the remaining playoff teams

Phoenix Suns general manager James Jones was the guy who would routinely hold court at his locker a half-hour before games and engage in all sorts of conversations in his playing days. Books he was reading, what the financial markets were doing, current events, political matters, the nuances of the NBA’s collective bargaining agreement. It was all fair game.

He was smart. He knew it, too.

These days, the rest of the NBA — if they didn’t know previously — has figured that out as well.

The eight general managers left in the NBA playoffs all had success stories to tell long before their postseason runs of 2021 started. For the team that winds up winning the NBA title, it’ll be a breakthrough since none of the remaining franchises have won a championship since 1983. And for the winning GM, it’ll be another breakthrough -- since none of them have won rings in their current capacities either.

“I took this job saying this would be a challenge for me to help young guys who are here in Phoenix, trying their hardest to see success and to live their dream,” Jones, a three-time NBA champion as a player in Miami and Cleveland, said recently on former NBA guard Rex Chapman’s podcast. “That became my motivation. So, when we started the work of changing the culture, it was more like, ‘Hey, this isn’t about us going to try and find the players that can get us back. It’s about taking the players we have and helping them move forward.’”

The structure of front offices differs a bit from team to team; GMs simply have more power in some places than others. But the role is vital, no matter how it gets defined in each city.

Atlanta’s Travis Schlenk built through the draft, then spent on free agents last summer and this season made the tough call to fire Lloyd Pierce and promote Nate McMillan. Now, the Hawks are in the second round.

Brooklyn’s Sean Marks swung for the fences and landed Kevin Durant, James Harden and Kyrie Irving, then got Steve Nash to coach them.

Elton Brand in Philadelphia is with a team that kept Joel Embiid and Ben Simmons together, surrounded them with shooting, brought Daryl Morey in basically to mastermind matters and hired Doc Rivers to coach.

Utah's Justin Zanik has been a right-hand man for Jazz Executive Vice President Dennis Lindsey for some time, and now has a more hands-on role in decisions like the trade for Mike Conley — a key part of this team finishing with the NBA's best regular-season record.

Michael Winger with the Los Angeles Clippers, a team with Lawrence Frank running the front office, has been widely regarded around the league for a decade over his salary-cap management techniques.

Jon Horst in Milwaukee already has been Executive of the Year, and that was before he got Giannis Antetokounmpo to sign his supermax and acquired Jrue Holiday.

Denver GM Calvin Booth has worked with Nuggets President Tim Connelly for years and is finishing his first year with a club that now has an MVP in Nikola Jokic and is clearly in a championship-aspiration window that should last a few years.

And Jones, all he did was hire Monty Williams to coach, then swung a deal for Chris Paul. The Suns are on their best run in 11 years as a result.

“It’s so important for a coach to have a really good relationship with the front office, because if that’s not there, then whatever you’re trying to do isn’t going to work,” 76ers coach Doc Rivers said this season.

There are 22 teams already in their offseason, so for the final eight teams and their GMs things are apparently working.

It shouldn’t be a surprise. They all got some good educations along the way.

There are ties to Pat Riley; Schlenk, like Heat coach Erik Spoelstra, started in the Miami video room and Jones was part of the Heat for years. There are ties to Gregg Popovich; Marks won a title as a player in San Antonio and another there as an assistant.

Some learned from the best in their fields; Brand went to Duke where he learned from Mike Krzyzewski, Winger broke into the sports world learning from renowned agent Ron Shapiro, and Zanik’s first job out of college was with agent Mark Bartelstein.

And there are rise-up-the-ladder stories; Horst won a pair of national titles at the relatively unknown USCAA level in college, and Booth was a 3.3-point-per-game scorer yet still carved out a 10-year NBA playing career.

A month or so from now, one of them is going to have his hands on the Larry O’Brien Trophy. If the Suns pull it off, Jones — who has to be a frontrunner for executive of the year — would have his fourth championship in 10 seasons, for three different franchises, in two different jobs.

Makes sense. After all, his nickname is Champ. Kevin Love called Jones in an Instagram post after the 2016 championship run with the Cavaliers “the best teammate I ever had.”

“In order to lead,” Love wrote, “sometimes you have to learn to follow.”