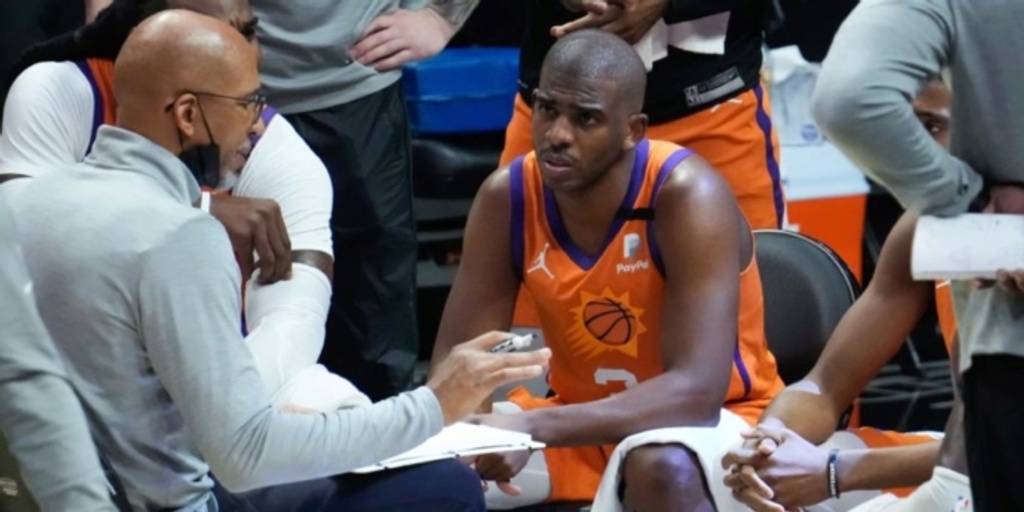 Paul had 12 assists in 39 minutes, but made only five of his 19 shots from the floor and finished with 15 points in the Suns' 106-92 loss to the Los Angeles Clippers in Game 3 of the Western Conference finals.

The 36-year-old point guard missed the first two games of the series after he entered the NBA’s health and safety protocols on June 16. He was upgraded to available from probable on the league’s injury report earlier Thursday after he participated in the team’s shootaround.

Paul didn't say what landed him in the league's protocols. He did say the hardest part of it was being separated from family.

Paul didn't score his first point until he made a free throw with 8:10 remaining in the second quarter. He missed his first six shots from the field, but was still effective in distributing the ball with three assists that led to seven points in the first quarter.

His best quarter was in the second, when he accounted for 19 of the Suns' 27 points as they had a 48-46 advantage at halftime. Paul scored seven and his five assists led to 12 points.

But for three quarters, looked as though he had been out nearly two weeks. His 26.3% shooting rate is the fourth-worst of his career in 120 playoff games. He also made only two of seven 3-pointers after making 44.4% this postseason.

“We didn’t make shots," Paul said. “You could tell they had a lot more energy. I've got to be better. I shot terrible. I’ve got to pick up the pace.”

If Monty Williams was hoping to ease Paul back into the rotation, those plans went away when Cameron Payne did not play in the second half due to an ankle injury.

“I thought I played him too much. He probably got tired," Williams said. "But it hurt us when Cam Payne couldn’t come back, so I left Chris out for a longer stretch. That’s on me."

Paul said he wasn't able to do much shooting or conditioning at home. The last game he had played before Thursday was June 13 against Denver, when he scored a game-high 37 points to close out the series.

Williams expects Paul to be better from a conditioning standpoint when the series resumes Saturday night. The Suns still have a 2-1 series advantage going into Game 4.

“I think getting his wind under him, coming back coming off of a virus, not doing any activity for a few days. But he’s ready to go,” said Devin Booker, who had 19 points. “He’s ready to get to practice tomorrow and ready to get back at it.”

The Suns had their nine-game postseason winning streak snapped and are still two wins away from a possible trip to the NBA Finals for the first time in 28 years. It would be the first for Paul, who has made it to a conference final for only the second time in 16 seasons.

Despite the off game, Paul isn't rattled about the rest of the series considering what he has already gone through.

“Things could be a lot worse. I’m here now, got an unbelievable team in Phoenix and I’ve got the best support system you could absolutely have,” he said. “So ain’t nobody over here feeling sorry. Whatever happened is in the past, and you move on.”