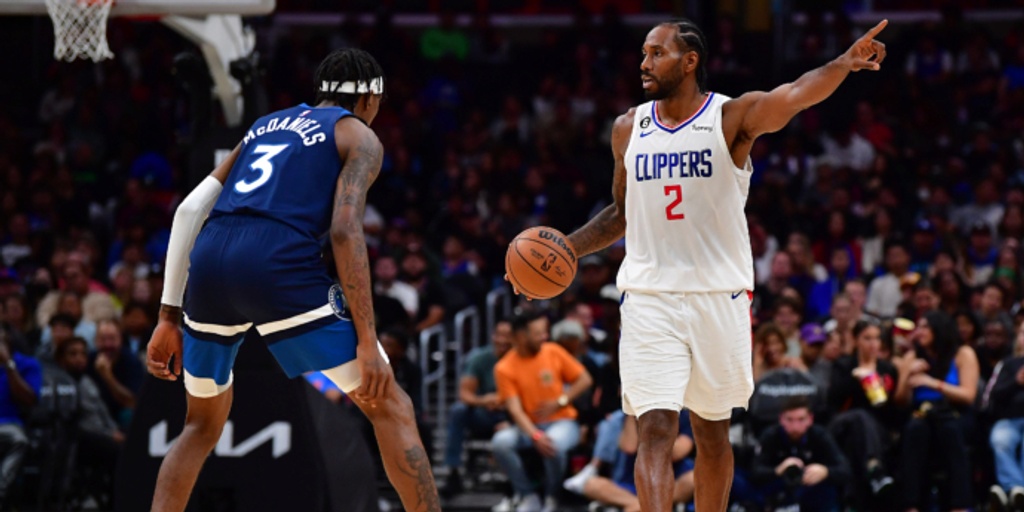 There are many one-word answers that could be given about the state of the NBA’s Western Conference. Loaded, deep, stacked, daunting: They all certainly apply.

Minnesota coach Chris Finch has another word: “Brutal,” he said.

That one works, too.

The defending NBA champion Golden State Warriors rightly expect to contend again, and there will be no shortage of teams entering this season believing they’re good enough to compete for a title as well. The Los Angeles Clippers get Kawhi Leonard back, the Phoenix Suns have won more games than any team in the NBA over the last two regular seasons, the Denver Nuggets have the two-time reigning MVP in Nikola Jokic, the Dallas Mavericks have a presumed future MVP in Luka Doncic, and the Memphis Grizzlies can say the same about Ja Morant.

Oh, and there’s LeBron James of Los Angeles Lakers, entering Year 20, somehow still not slowing down and maybe 50 or so games away from catching Kareem Abdul-Jabbar for the all-time scoring record.

“When you put in the work,” James said, “you see the results.”

Lakers first-year coach Darvin Ham knows a great offseason, or a great lineup on paper to start a season, doesn’t guarantee anything. He was an assistant coach for the Lakers in 2012-13, when the team entered the year with a lineup of Steve Nash, Kobe Bryant, Metta World Peace, Pau Gasol and Dwight Howard.

That group had two Hall of Famers in Nash and Bryant, and two likely future ones in Gasol and Howard. They started seven games together that season — and went 0-7.

The Lakers went through three coaches that injury-plagued year, won 45 games and got swept in the first round by San Antonio.

“There’s a lot of work that goes into it, remaining healthy being at the top of the list,” Ham said. “And most important, also coming together as a team.”

Finch’s Timberwolves are another team that made big offseason moves, landing Rudy Gobert from Utah. But even with that acquisition, Finch knows nothing will be easy in the West. He noted the conference has so much quality that even some good teams — New Orleans was an example he cited — just aren’t getting talked about.

“I think it’s open,” Finch said. “And I think it’s deep. ... There’s certainly stratas of teams, but I think there’s no clear-cut, dominant team, as there has been. But yeah, it’s going to be a brutal one.”

A look at the West, in predicted order of regular-season finish:

1. Los Angeles Clippers. Leonard should quickly remind the league he’s still elite. If Paul George can stay healthy, and if John Wall has anything left — the Clippers would be smart to watch his minutes — then this is a team that could win the whole thing.

2. Golden State Warriors. Doubt the champs at your own peril. The Draymond Green mess is exactly that — “a crisis,” coach Steve Kerr called it — but the Warriors seem like a group that can handle such a situation. Oh, and they have Stephen Curry and Klay Thompson. And a super-talented young core.

3. Phoenix Suns. The Game 7 embarrassment at home last season isn’t something that will be easily forgotten and it wasn’t exactly a smooth offseason amid the scandal surrounding owner Robert Sarver. Devin Booker is entering his prime, and Chris Paul is running out of opportunities to finally get his championship. Still an enormously talented team.

4. Denver Nuggets. All they have is a two-time reigning MVP in Jokic, and the returns of Jamal Murray and Michael Porter Jr. There is a lot to like.

5. Memphis Grizzlies. It may be unrealistic to expect another 56-win regular season, but Morant is an MVP-caliber star, and the team has tons of swagger.

6. Minnesota Timberwolves. Yes, they emptied the safe to acquire Gobert. Pairing him with Karl-Anthony Towns gives Minnesota a 1-2 punch like almost none other. And with D’Angelo Russell and Anthony Edwards continuing to get better, the Wolves should be in the mix.

7. Dallas Mavericks. Doncic looks to be in better shape, will be an MVP frontrunner and is coming off a great summer at EuroBasket for Slovenia. The Mavs need to find ways to not have Doncic carrying more than his share of the load.

8. Los Angeles Lakers. The biggest mystery in the West and maybe the league. James is on pace to become the scoring king, Anthony Davis can still be a major problem for opponents — when he’s healthy — and Russell Westbrook is looking to silence critics. But will it work?

9. Sacramento Kings. New coach Mike Brown will install a new culture, the acquisition of Kevin Huerter was super-smart and the Kings are going to score a ton of points. It’s going to be hard to take big leaps forward in the loaded West, but the Kings will try.

10. New Orleans Pelicans. They got hot at the right time last year, got playoff experience and now they get Zion Williamson back after he couldn’t play last season. Not many teams embrace a coach the way New Orleans embraces Willie Green, either. But, again, the West is just so tough ...

11. Portland Trail Blazers. Damian Lillard is going to be a player on a mission this season and the Blazers will be improved over a year ago. But, again, the West is just so tough ...

12. Utah Jazz. Even after trading away Donovan Mitchell and Gobert, there’s still talent there. Not enough talent, but coach Will Hardy will have Utah playing defense. That’s a certainty.

13. Houston Rockets. We’ve now entered the lottery-watch portion of the list. Houston has young talent and a really good coach in Stephen Silas, but a team needs more in the West these days.

14. Oklahoma City Thunder. No Chet Holmgren this season means the Thunder return to the lottery. It’s a development year for a team with tons of draft assets.

15. San Antonio Spurs. Gregg Popovich won’t add many wins to the NBA all-time record this season, but he’ll be teaching the players he has how to win in the future. He’ll also be brushing up on French wine, with hopes of having something to talk about with Victor Wembanyama for years to come.

FanDuel Sportsbook lists the Warriors as the pick to come out of the West, by the slimmest of margins over the Clippers with the Suns not far behind.

Denver, Memphis, the Lakers, Dallas, Minnesota and New Orleans are the second tier of FanDuel’s West favorites. From there, it’s a wide gap to the rest of the West -- Portland, then Sacramento, Utah, Oklahoma City, San Antonio and Houston.

If he does that again this year, he’ll have climbed into the top 40 scorers in NBA history.

James has had a lot of teammates. A whole lot.

Counting players who have gotten into regular-season games during James’ stints in Cleveland, Miami and with the Lakers, he’s up to 226 teammates over his first 19 seasons. That number will rise on opening night, probably into the 230s.

There are three new coaches in the West. Ham got his long-awaited chance to coach when he was hired by the Lakers, and Utah's Hardy is making his head coaching debut.

Sacramento’s Brown went 347-216 coaching Cleveland and the Lakers, and spent the last six seasons as an assistant in Golden State.

They lost to Portland the next night. They haven’t been over .500 as a franchise since.

It seems quite possible: The Nuggets have been an average of 20 games over .500 in each of the last four seasons.