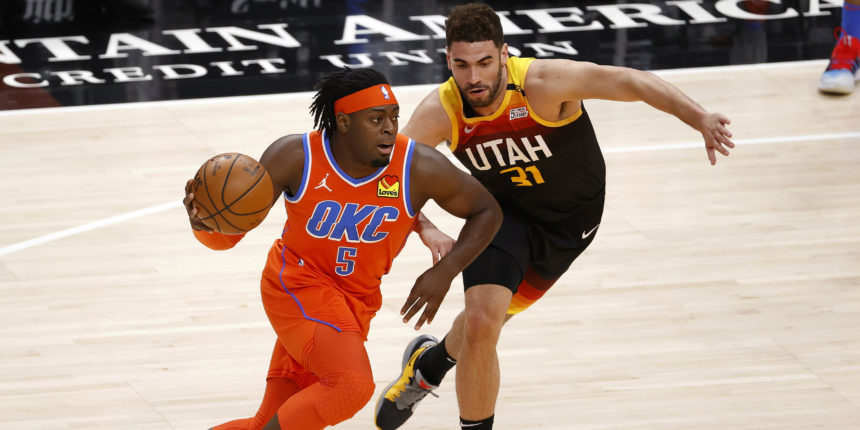 Bojan Bogdanovic knew the Jazz would look to him to take a leading role with three of Utah's primary players out.

“We had guys out on this back-to-back, so we’re ran way more sets of fences for me so I was able to get to the basket and draw the fouls,” Bogdanovic said.

Luguentz Dort scored a career-high 42 points and Moses Brown had 12 points and 15 rebounds for the Thunder, who have lost seven in a row and 10 of 11.

Bogdanovic, who scored a season-high 33 points in his last game, left his familiar spot on the perimeter and repeatedly took the ball to the basket. He finished with a season-high 10-for-10 shooting from the free throw line.

“I knew I had to be more aggressive these last two games,” Bogdanovic said.

In pain, Bogdanovic held his right wrist after getting knocked to the floor in the third quarter. Surgery on that wrist ended his season before the bubble last season. Bogdanovic kept playing and was a key to Utah’s 66-38 scoring advantage in the second and third quarters.

Mitchell, who averaged over 40 points in his previous four games, didn’t need to be nearly as dominant against the Thunder.

Rudy Gobert had 13 points, 14 rebounds and seven blocks for Utah, which held the Thunder to 38.7% shooting.

The Jazz used a 12-0 run after a 55-53 halftime edge to blow open a close game. Mitchell made consecutive 3-pointers to cap the run.

The Thunder never got within single digits until the final couple minutes, as Utah pushed the lead to as many as 25 points.

Mike Conley, who rested the first half of the back-to-back when the Jazz had their 24-game home win streak snapped, had 15 points and a season-high 14 assists for league-leading Utah (41-14).

Georges Niang made his first start of the season and the second of his five-year career for the short-handed Jazz and scored 18 points, including six 3-pointers. He had a season-high 10 rebounds.

“He didn’t get outside of himself. That’s what he’s been doing. He just got more opportunity, more minutes, and sometimes when that happens, guys try to do more, but in George’s case, what he did was plenty. I thought he really let the game come to him,” Utah coach Quin Snyder said.

Coming into the game, The Thunder’s point differential over their six-game losing streak was 28.5 points per loss, the worst mark for any team in 17 years. They seemed determined to change that right from the tip.

Known for his defensive prowess rather than his shooting, Dort scored 18 points — a career-high in a quarter – to power the Thunder to a 31-14 lead in the first period.

“He was sensational. And the thing that goes really unnoticed with him is he guarded Mitchell the whole night. There are guys who get 40 in the NBA on certain nights, but I’m not sure many have guarded a guy like Mitchell as effectively as Lu did,” OKC coach Mark Daigneault said.

Dort looked unstoppable in his second game after missing seven contests in the concussion protocol. The Jazz paid more attention to him in the middle quarters, but he finished with a flurry to make the margin respectable.

“I’ve just have been working on my game a lot. To have the opportunity every day to showcase my game and just to prove and show that I’m improving, it felt good tonight,” Dort said.

The game was the third in four nights for the Jazz, who have won nine straight on zero days rest and are 10-1 overall on the second game of back-to-back sets.

“They blitzed us so our backs were up against the wall. We had to respond and we have a great group of guys that are resilient, so we got back to playing Jazz basketball,” Niang said.

IT’S NOT JUST THE BLOCKS

Whether Gobert, a two-time Defensive Player of the Year, has one block or seven, his value on defense is making opponents uncomfortable.

“I just try to do the same thing that I always do, which is: make sure the other team doesn’t score. … I want them taking shots that are not comfortable taking and contested. Tonight, they kept attacking the rim, so I kept being there,” he said.

As the game went on, it took an obvious toll on the Thunder’s effectiveness.

“That’s why he’s good. He can make you timid and you can’t play like that against them. You can’t play scared of your own shadow down there,” Daigneault said.

Thunder: Aleksej Pokusevski (sore arm), Shai Gilgeous-Alexander (sore foot) and Mike Muscala (sprained ankle) missed the game. … Dort scored his previous career high of 26 points against the Jazz in December. He went 9 of- 1 from the field and 5 of 7 from 3-point range in that game. … At Bazley’s urging, Daigneault successfully challenged a foul on Bogdanovic’s 3-point shot.

Jazz: Host the Indiana Pacers in a rare day game on Friday.