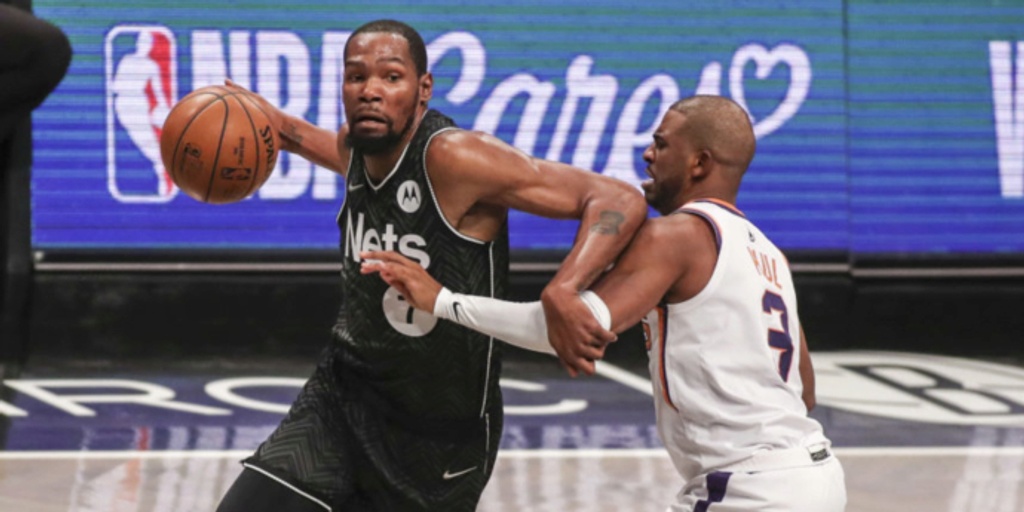 Kevin Durant scored 33 points in his latest return from injury, Kyrie Irving had 34 and the Brooklyn Nets beat the Phoenix Suns 128-119 on Sunday in a matchup of two of the NBA's top teams.

Durant missed three games after bruising his left thigh early in a loss to Miami last Sunday and has been limited to just 25 games this season. He played 28 minutes off the bench in his return, shooting 12 for 21.

Blake Griffin scored 15 points to help the Eastern Conference leaders improve to 25-7 at home and 20-6 against West teams.

Devin Booker scored 36 points and Deandre Ayton had 20 points and 13 rebounds for the Suns, the No. 2 team in the West who are seeing the best of the East on their current road trip.

They led for much of the first half but Brooklyn pulled away after halftime, when Durant played his normal minutes after not coming into the game until four minutes into the second quarter so the Nets could keep his minutes down so he could play down the stretch if it was close.

The Nets were 2-2 while playing almost entirely without Durant in their previous four, but things change when the four-time scoring champion is on the floor.

“How you guard away from him is different than how you would have guarded before on another guy who couldn’t shoot from 40 feet from the basket, is 7-foot-1 and dribbles like a guard,” Phoenix coach Monty Williams said before the game.

Durant scored 10 points in the third quarter, then had the first five of the fourth to give Brooklyn its first double-digit lead at 102-92.

With Ayton getting 10 points and 10 rebounds in his first 14 minutes of the floor, the Suns led throughout the second quarter and went ahead 56-43 with about 3 1/2 minutes left. Brooklyn cut it to 61-59 at the break.

Irving was just 4 for 19 Friday against Boston, but made his first four shots Sunday and never really cooled off. He had 24 points on just seven field goal attempts in the first half, tying his highest-scoring half of the season, and added 12 assists.

Suns: Jae Crowder missed his second straight game with a sprained right ankle. Dario Saric sat to rest his left ankle. ... Frank Kaminsky played for the first time on the road trip and had five points.

Nets: Tyler Johnson scored eight points after the former Suns guard missed 10 games with right knee soreness. ... The Nets swept the season series, having coming from 24 down to win at Phoenix without Durant and Irving on Feb. 16.

The Suns are 2-2 on a five-game trip that started with wins at Milwaukee and Philadelphia, the Nos. 3 and 2 teams in the East, before a loss at Boston. It ends Monday at New York, which has won nine straight.

“Like, these last three games have been playoff games for us in atmosphere, so I think they’re great,” Williams said. “Your armpits and underwear may tell you a different story at the end of the game, but as far as growth is concerned it’s pretty good for our team and our young guys.”

Phoenix hasn't made the playoffs since 2010, when Nets coach Steve Nash was still playing there. The two-time MVP is happy for his old team's success.

“They’re clearly one of the best teams in the league and have just had an incredible season start to finish,” Nash said. “So really admire what everyone over there has done, but I’m just happy to see the Suns back in prominence and fighting for a contending position in the playoffs.”