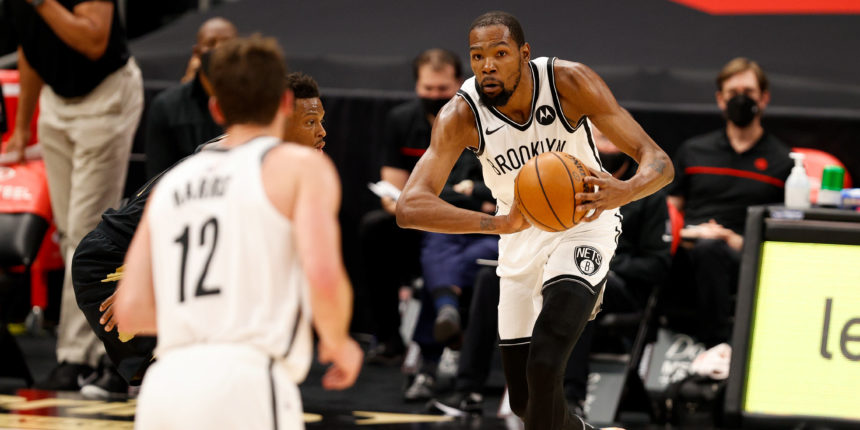 Kevin Durant scored seven of his 17 points in the fourth quarter, Jeff Green had 22 points and the Brooklyn Nets beat the Toronto Raptors 116-103 Tuesday night and clinched a playoff spot.

Durant, who was playing his second game after returning from a thigh injury, added 10 rebounds in 33 minutes for his eighth double-double of the season. Durant hit a 3-pointer with 1:47 remaining and glared at the Toronto bench after putting his team up 111-101.

Kyrie Irving finished with nine points, six rebounds and four assists while making just 3 of 13 shots. But the other seven Nets who played all finished in double figures on the night Brooklyn became the first Eastern Conference team to lock up a postseason berth.

8 Nets on the floor.
7 Nets in double-figures.
Now that's a team effort.

The Nets won for a third straight time and the fourth time in five games to prevent Toronto from pulling off the season sweep. The Raptors, who were led by Kyle Lowry’s 24 points and six 3-pointers, had their five-game home winning streak end. One of those victories was a 114-103 defeat of the Nets in Tampa last week.

Newly signed guard Mike James scored all of his 11 points in the fourth quarter as the Nets rallied from an 83-80 deficit to start the final period. Blake Griffin scored 17 points off the bench, while Joe Harris added 16 points and four 3-pointers. Brooklyn shot 48.2%, hit 18 3-pointers and handed out 30 assists.

Toronto was in action less than 24 hours after beating Cleveland 112-96 in Tampa on Monday. Back-to-back sets of games have been a problem all season for the Raptors, who are 2-12 on the second night of consecutive games.

Brooklyn coach Steve Nash said he’s come to grips with the Nets not having James Harden, Durant and Irving on the floor together prior to the playoffs, if even then. Remarkably, Brooklyn’s trio of superstars have played just seven games together all season because of injuries and COVID-19 protocols.

“We recognize now that we’re not going to have the luxury of a run of games with everyone available, and we may not have that to start the playoffs,” Nash said. “It’s been like an avalanche of relentless injuries, games and travel and it’s just part of the challenge for this team.”

Harden, who has been out since April 5, is back with the team and Nash said the guard went through light drills on Tuesday. “He’s not doing any high-intensity stuff, but he’s shooting and doing all the strength and rehabilitation work. Positive signs, but still a ways to go.”

Nets: Brooklyn started a stretch of playing seven of the next eight on the road. … Irving came into Tuesday averaging more assists in April (8.3) than any other month of his career. He had 15 assists early in the month against Charlotte and averaged 10.3 assists in Brooklyn’s three games prior to Tuesday. … Irving’s first points of the night didn’t come until the 5:58 mark of the second quarter after opening with three straight misses.

Raptors: Toronto was once again without Chris Boucher (knee), Gary Trent (leg), Paul Watson (knee) and Jalen Harris (hip). … Lowry made his first three 3s and 5 of his first 7 after missing 13 of 14 attempts in his previous two games. He entered Tuesday in a 4-of-23 rut in the previous three games. … Fred VanVleet missed his first six shots and four 3s before connecting from beyond the arc in the second quarter. … Lowry scored at least 20 points for the 13th time this season, but for the first time since March 14.