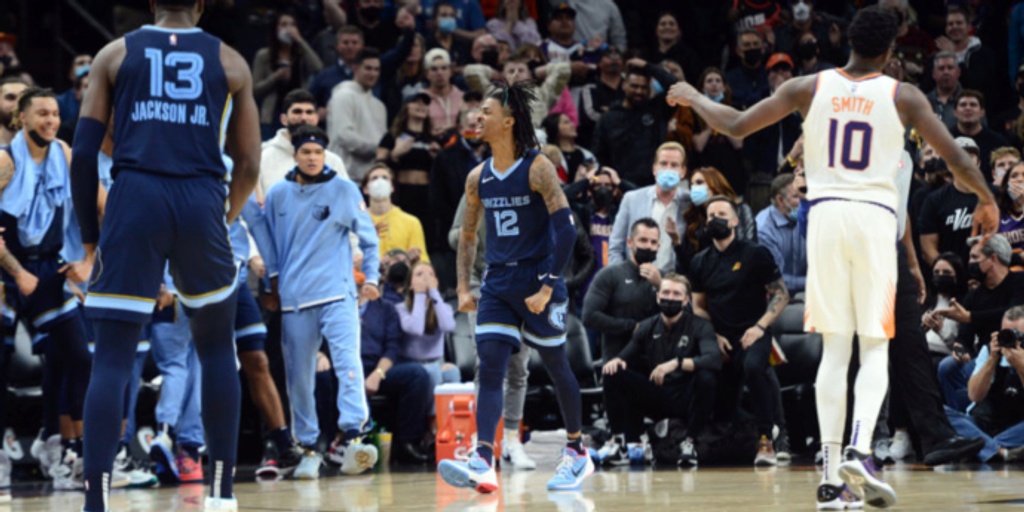 PHOENIX (AP) — Ja Morant scored 33 points, including a layup with 0.5 seconds to play that gave the Memphis Grizzlies a 114-113 victory over the Phoenix Suns on Monday night.

Morant’s basket came after Devin Booker’s 3-pointer with 5 seconds to play gave the Suns their first lead since early in the game. After a timeout, Morant drove the left side of the lane and banked it in. Phoenix’s final shot from the corner was off the mark.

Booker led the Suns with 30 points. Deandre Ayton and Jae Crowder, as well as coach Monty Williams, were placed in the COVID-19 protocols. The Suns lost their second straight at home following the Christmas defeat to Golden State. The Suns had won 15 in a row in Phoenix after losing their first two of the season at home.

Bane scored 28 on Sunday night in the Grizzlies’ victory in Sacramento.

The Suns, who trailed by as many as 18, got within 112-110 on Mikal Bridges’ basket with 32 seconds left. After a shot-clock violation, the Suns got the ball back with 8 seconds to go and Booker made his shot from the top of the key, but left Morant and Memphis enough time to take the lead again.

Elfrid Payton, who was placed in the protocols on Sunday, was cleared to play before the game. Associate coach Kevin Young filled in for Williams.

Memphis played without Dillon Brooks, Jarrett Culver, De’Anthony Melton and Yves Pons, all in the protocols.

Young, 40, has been an assistant with the Suns and the 76ers, where he worked with Williams. He began his coaching career when he was 23, with the Shamrock Rovers in Dublin in the Ireland Super League. He also has coached three teams in the NBA Development League.

Young referenced his time in the D-League when he was asked about dealing with the sudden lineup changes, remembering a time when three of his players were called up to the NBA within an hour.

As a result, he knew to expect the unexpected.

“You see what’s going on (with the virus), you just start kind of mentally preparing for things like this,” Young said before the game.

“Everyone’s going through the same thing. You kind of get lost in the task at hand, you got a job to do and I think that’s the approach we’ve all taken. Just keep it simple.”

Grizzlies coach Taylor Jenkins says his team doesn’t worry about the opponent in the moment. “If things have to change a little bit, our guys are really good at changing on the fly.”

Grizzlies: Have 10 or more steals in 12 of its last 13 games. The Grizzlies entered Monday leading the NBA in steals with 10.4 per game.

Suns: Signed forward Emanuel Terry to a 10-day contract Monday. Terry, who is 6-9, played in two games with the Suns during 2018-19, and was playing for the G League Stockton Kings this season.