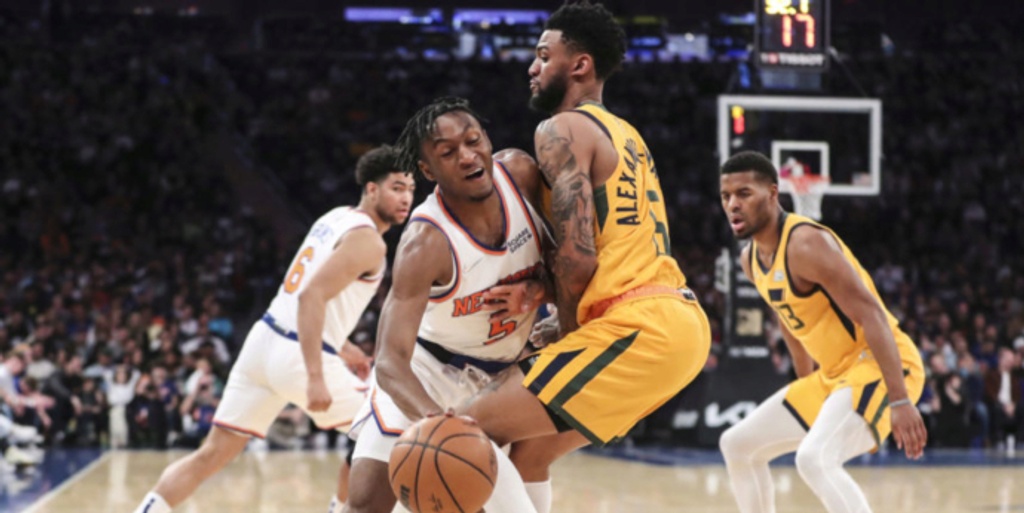 Jordan Clarkson came off the bench to score 18 of his 23 points in the first half for the Jazz, who opened a six-game road trip with the first of two games in two nights in New York. Rudy Gobert and Royce O'Neale each had 14 points.

Mitchell, a New Yorker who got a nice ovation before the game, made seven 3-pointers and threw down a powerful dunk midway through the fourth quarter when the Knicks were getting back in the game.

RJ Barrett scored 24 points and Evan Fournier had 17 for the Knicks, who had won two straight and five of seven. Julius Randle was 6 for 21 for 13 points and 11 rebounds as the Knicks shot 37% from the field.

Missing some key offensive players, Utah controlled much of the game with its defense before New York trimmed it to 93-89 on Obi Toppin's dunk with 5:19 left. But the Jazz answered with a 12-0 run, holding the Knicks scoreless for nearly four minutes to pull away to a 105-89 lead with just under two minutes remaining.

Utah only had two baskets during that stretch, punishing the Knicks by getting inside and drawing fouls before Rudy Gay capped the stretch with a 3-pointer and Mitchell later added another.

Mike Conley rested his right knee ahead of the game Monday night in Brooklyn and Bojan Bogdanovic missed his fourth straight with a left calf strain. So the Jazz turned up their defense, allowing just 44 points combined in the middle two quarters of their third straight victory.

The Knicks led 31-26 after one, but Clarkson played the entire second and scored 10 points. He and Mitchell both had 18 at halftime as Utah led 60-53.

The Jazz held the Knicks to 24% shooting in the third quarter, blocking almost as many shots (5) as the Knicks had baskets (6).

Jazz: Mitchell missed the last game with bruised right calf. ... Hassan Whiteside returned after a one-game absence with an illness not related to COVID-19 but Trent Forrest missed his fifth straight game with a sprained right wrist.

Knicks: Immanuel Quickley scored 16 points. ... Coach Tom Thibodeau said he'd been using a nine-man rotation at the moment to allow plenty of minutes for players such as Obi Toppin and Quentin Grimes, though might extend at times for rookie Miles McBride. McBride did get in as the 10th late in the third quarter.

Coach Quin Snyder was asked if there were any positives in having such a long road trip so late in the season. The Jazz don't play at home again until March 31.

“I don’t know. We’re going to some cities that have great restaurants,” Snyder said. “We anticipated this stretch for a while obviously and we’re not healthy right now. But sometimes when we’ve gone on the road and we’ve found adversity, whether it be internal or your opponent, I think there’s opportunity there.”