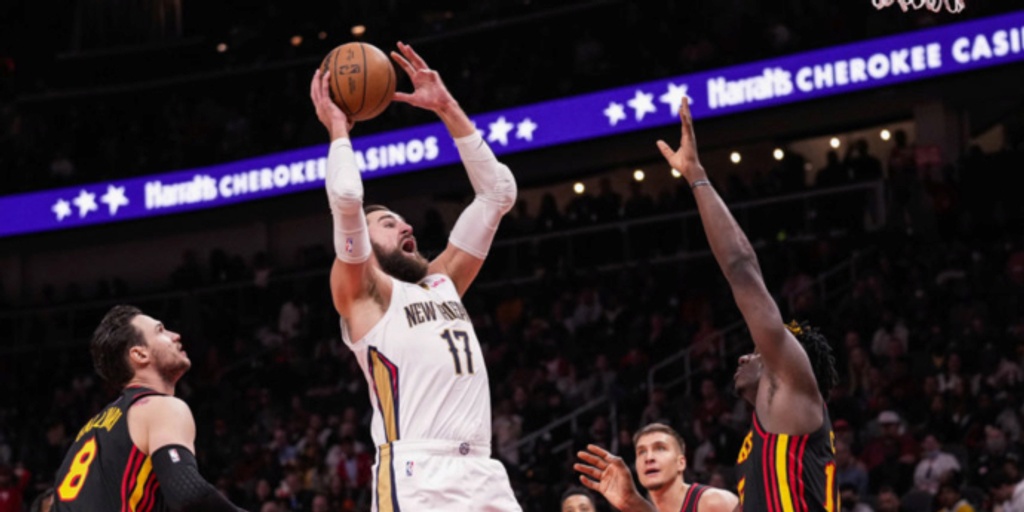 The Pelicans, who moved into ninth place in the Western Conference, have won their last two and three of four and were without leading scorer Brandon Ingram and fourth-leading scorer Devonte’ Graham. Both missed the game with injuries.

Danilo Gallinari scored 25 points for Atlanta, which had its seven-game home winning streak snapped. The Hawks, who had won 15 of 17 at State Farm Arena, stayed alone in 10th place in the East despite the loss.

New Orleans, the only team to rank among the top five in offensive and defensive rebounds, topped Atlanta 54-40 on the boards. All three of the Pelicans’ big men — Valanciunas, Jaxson Hayes and Willie Hernangomez — finished with a double-double.

Hawks star guard Trae Young, listed as questionable before the game with a left quadriceps contusion, finished with 21 points and 10 assists. He has career 90 games with at least 20 points and 10 assists, most in the NBA over the last four seasons. Young has 35 double-doubles this season.

Atlanta couldn’t close the gap in the third as Valanciunas’ three-point play made it a 15-point lead in the final minute of the period. The Hawks trailed 48-28 in points in the paint through the first three quarters.

It was a two-point game after Young hit a pair of free throws with 34.2 seconds to go, but that was as close as Atlanta would get.

New Orleans led by a game-high 19 early in the second before the Hawks got hot and trimmed the lead to four on Capela’s tip-in at the 4:18 mark. The Pelicans, who were up 60-50 at intermission despite shooting just 41.2%, outscored Atlanta 14-0 on fastbreak points in the first half. New Orleans began the game ranked second in average transition points with 16.8.

McCollum scored 13 points in the first half. Gallinari had 18.

The Pelicans took a 23-11 lead in the first after going on a 13-2 run that ended with Herbert Jones’ basket and a Hawks timeout. New Orleans, which had nine steals for 12 points in the first, led 35-18 entering the second.

The Pelicans ended a six-game losing streak in the series.

Hawks: F John Collins (right ring finger sprain and right foot strain) missed his fifth straight game. Since getting drafted 19th overall in 2017, Collins leads his classmates with 53 games of at least 20 points and 10 rebounds. Collins is Atlanta’s second-leading scorer. ... Bogdanovic was coming off a season-high 30 points Friday against Memphis. ... The Hawks have at least 25 assists in seven straight games, the longest active streak in the NBA.

Pelicans: At Charlotte on Monday.

Hawks: At New York on Tuesday.