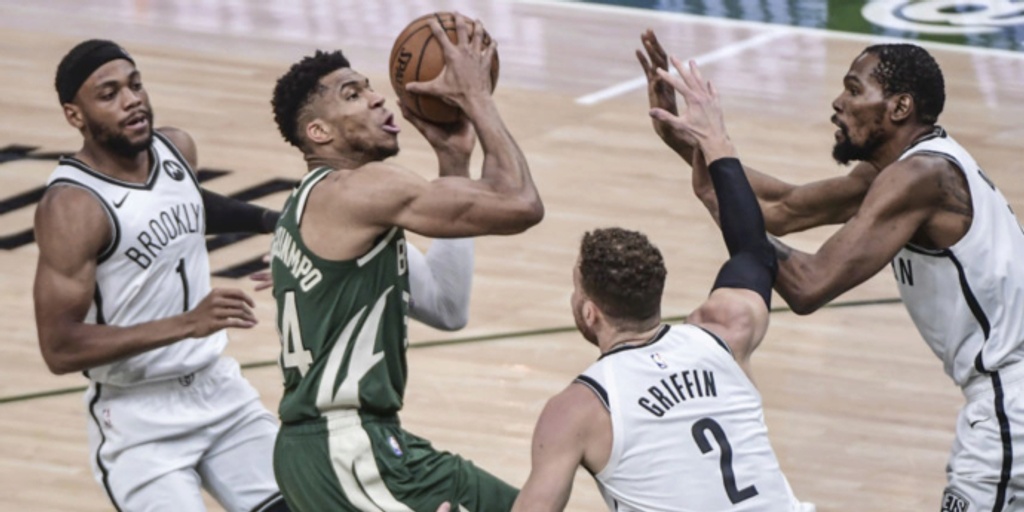 Jrue Holiday made a go-ahead driving layup with 11.4 seconds left and the Milwaukee Bucks edged the Brooklyn Nets 86-83 on Thursday night in Game 3 after two blowout losses in New York.

JRUE GETS TO HIS SPIN MOVE TO LIFT MILWAUKEE IN A THRILLING GAME 3! #ThatsGame #NBAPlayoffs #FearTheDeer pic.twitter.com/P675qmQ0ZR

Kevin Durant’s 3-point attempt to tie bounced off the rim as the horn sounded. He scored the Nets’ last nine points and finished with 30.

Game 4 of the second-round series is Sunday in Milwaukee.

Khris Middleton scored 35 points, and Giannis Antetokounmpo added 33 for the Bucks. They won after blowing a 21-point lead.

The @Bucks duo goes OFF for 68 in a thrilling W ‼️

Holiday scored just nine points and shot 4 of 14 but made the biggest basket of the night.

Brooklyn led 83-82 when Bruce Brown missed a jumper with just over 20 seconds left. Antetokounmpo got the rebound, the Bucks worked the ball upcourt and Holiday drove to the basket to put Milwaukee ahead for good 84-83.

After Brown missed his own driving layup attempt with just over 6 seconds left, Middleton got the rebound. Middleton made a pair of free throws with 2.1 seconds remaining to cap the scoring.

Kyrie Irving scored 22 and Brown had 16 for the Nets.

The Bucks started out intent on turning Game 3 into a complete reversal of Game 2, which they lost 125-86 as the Nets recorded their most lopsided playoff victory in franchise history.

Milwaukee grabbed a 30-9 lead in the first 10 ½ minutes but then got outscored 22-3 during a stretch that lasted nearly 9 ½ minutes as the Nets clawed their way back into the game.

Neither team ever led by more than five points in a second half that had emotions high on both sides.

After P.J. Tucker got called for fouling Durant in the third quarter, Tucker started complaining about the call. That led to Tucker and Durant jawing at each other as they got face to face, with officials calling a double technical on the two players.

Bucks: Milwaukee stuck with the same starting five that they used in the first two games of the series. That lineup included Tucker, who was inserted into the starting lineup for the beginning of this series. Donte DiVincenzo, a usual starter, tore a ligament in his left ankle in Game 3 of Milwaukee's first-round series with Miami and will miss the rest of the season. ... The Bucks were playing a home game with fans filling all the seats for the first time this season. The crowd included Green Bay Packers running back Aaron Jones and outside linebacker Za'Darius Smith as well as former Packers receiver Antonio Freeman. Fiserv Forum was at 50% capacity for the Bucks-Heat series.