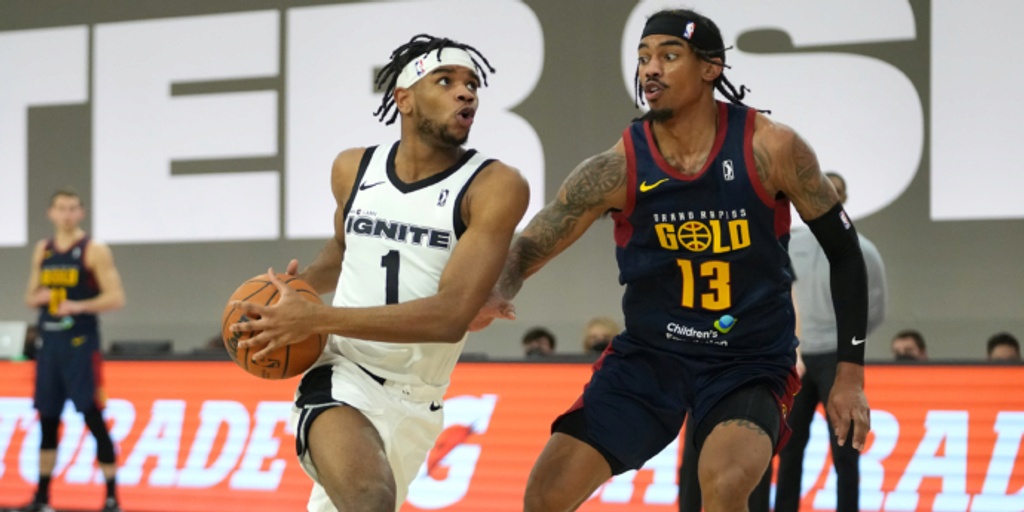 Mavs trade into draft, get G League's Hardy at 37 from Kings

Dallas Mavericks general manager Nico Harrison can finally say he has made a draft pick.

The second-year GM and his club traded back into the NBA draft in a deal with Sacramento, acquiring G League player Jaden Hardy after the Kings drafted him 37th overall in the second round Thursday night.

Dallas was on the verge of going without a pick for the second consecutive year before moving back in. The Mavericks are sending 2024 and 2028 second-round picks to the Kings.

The Mavericks had the 26th pick in the first round, but traded it last week to Houston for Christian Wood in an effort to improve their frontcourt after it was exposed in a five-game loss to Golden State in the Western Conference semifinals.

Harrison said he had no inclination he would end up with a pick anyway, but said the Mavericks would be ready if a player they liked slipped down the board. That player was Hardy, who struggled early with the G League Ignite after bypassing college as one of the country's highest-rated recruits.

“I just knew that we did the work, we knew the guys we liked and if guys like Jaden were available, that we would try to get back in,” Harrison said. “You can’t predict that. It happened, and we did as we said we would do.”

The trade for Wood was the second big move for Harrison since taking over for Donnie Nelson after the 2020-21 season. Harrison's first splash was sending Kristaps Porzingis to Washington before the trade deadline in February in a deal that ended the effort to create a unique European pairing with superstar point guard Luka Doncic.

The Mavericks didn't have a pick in last summer's draft in part because they sent that first-round selection to New York in the deal that brought Porzingis to Dallas.

Hardy, who turns 20 next month, was a potential lottery pick before a poor start with the G League Ignite hurt the shooting guard's draft stock. He played with his brother, former UNLV and Oregon player Amauri Hardy, and averaged 19.8 points while shooting just 38%.

The Detroit-raised Hardy cut short his senior season in high school in Nevada when he was averaging 30 points, nine rebounds and eight assists per game. A few months later, he announced he was joining the G League instead of signing with Kentucky or UCLA, his most likely college destinations.

“It actually affected it in a positive way if that makes sense because he did struggle early on but then he figured it out," Harrison said. “If you look at the G League Ignite as an experiment, it shows that it works.”

Hardy will have difficulty breaking into the rotation of shooting guards in a backcourt led by Doncic.

Dorian Finney-Smith, Reggie Bullock and Spencer Dinwiddie are returning after taking turns as key playoff contributors as the Mavericks made their deepest postseason run in 11 years. Tim Hardaway Jr. is returning after missing most of last season with a broken foot.

The Mavericks also want to re-sign Jalen Brunson, another point guard who ended up starting alongside Doncic most of last season. The New York Knicks appear to be positioning themselves for a run at Brunson.

“It's tough to say how set the roster is until you know” on Brunson, Harrison said. “And that's going to be the first thing that happens. Once you know that, then you go along with the rest of the plan.”

The Rockets ended up sending the 26th pick, Duke's Wendell Moore, to Minnesota. Houston also got guards Sterling Brown and Trey Burke, forward Marquese Chriss and center Boban Marjanovic from the Mavericks, who likely have their next starting center in Wood.

“Christian, he gives something that we don't have,” Harrison said. “He's a good rebounder. He's super athletic. He'll be great with Luka in the pick-and-roll. He can play above the rim. He can also shoot. He's an offensive guy at that position.”