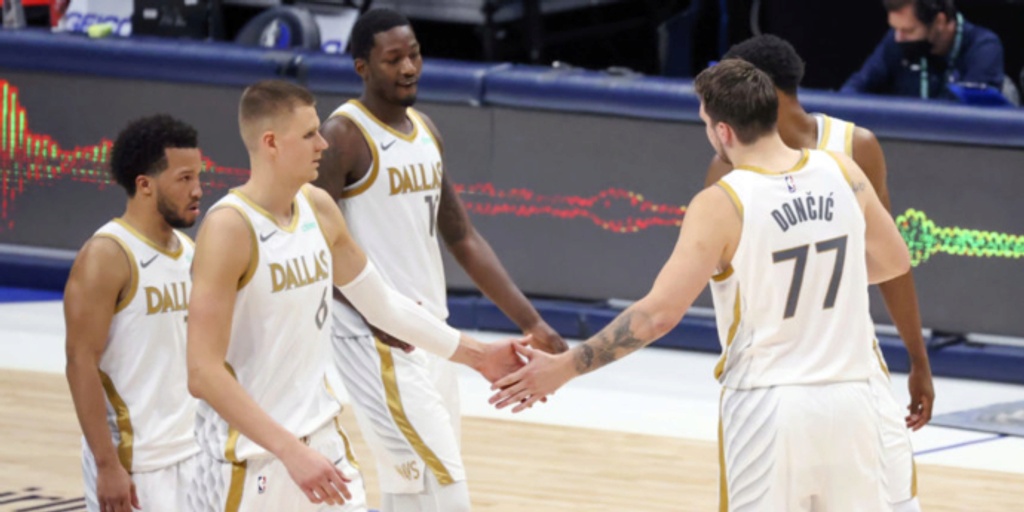 DALLAS (AP) — Luka Doncic had his 11th triple-double of the season with 20 points, 10 rebounds and 11 assists and the Dallas Mavericks guaranteed themselves a top-six finish in the Western Conference, to avoid the NBA's play-in next week, with a 114-110 victory over Toronto on Friday night.

Kristaps Porzingis, who finished with 21 points and 10 rebounds, made a 3-pointer on the game's first shot and the Mavericks never trailed in their regular-season home finale, though the undermanned Raptors cut it close late. Toronto used only seven players, going without its top seven scorers — mostly because of injuries, but also with the season winding down and the Raptors out of contention for even a play-in spot in the East.

Toronto, which trailed by 19 points early in the second half, was within 105-102 on Malachi Flynn’s 3-pointer with three minutes left, which followed a Mavericks turnover after his layup. But Dorian Finney-Smith responded with a 3-pointer for Dallas and Doncic then drove for a one-handed slam. Doncic had earlier rebounded his own missed short jumper and followed that with a nifty layup.

Raptors rookie Jalen Harris, a Dallas native making his second career start in as many nights, had 31 points to lead Toronto. Flynn had 26 points.

The Southwest Division-winning Mavericks (42-29) are in fifth place in the West, with a one-game lead over Portland (41-30) for the No. 5 seed with one regular-season game remaining for both teams. The Trail Blazers have the tiebreaker if they finish with the same record, since they won two of three against Dallas this season.

Teams finishing seventh through 10th in each conference are forced into play-in games next week to determine who advances. The top six teams get an extended break after a condensed regular-season schedule, though with 10 fewer games than usual, because of the pandemic.

Toronto rookie forward Freddie Gillespie from Baylor got his first career NBA start, and it came on a night when the Baylor coach Scott Drew and the national champion Bears were in attendance to be recognized by the Mavericks. Dallas County officials declared May the month of the Bears in the county.

Raptors: Stanley Jonson had a double-double with 15 points and 10 rebounds. ... Toronto extended a franchise record with its 37th different starting lineup this season. It was the ninth game in a row they used a different starting five.

Mavericks: It was the 36th career triple-double for Doncic, who is 11th on the NBA career list. He is still seven behind Fat Lever for the top 10, but now three ahead of Bob Cousy. ... Jalen Brunson finished with 19 points and Finney-Smith had 17. ... Dallas had lost 12 of its previous 16 games against the Raptors, including 116-93 in Tampa on Jan. 18.

Raptors: Regular-season “home” finale against Indiana on Sunday in Tampa.