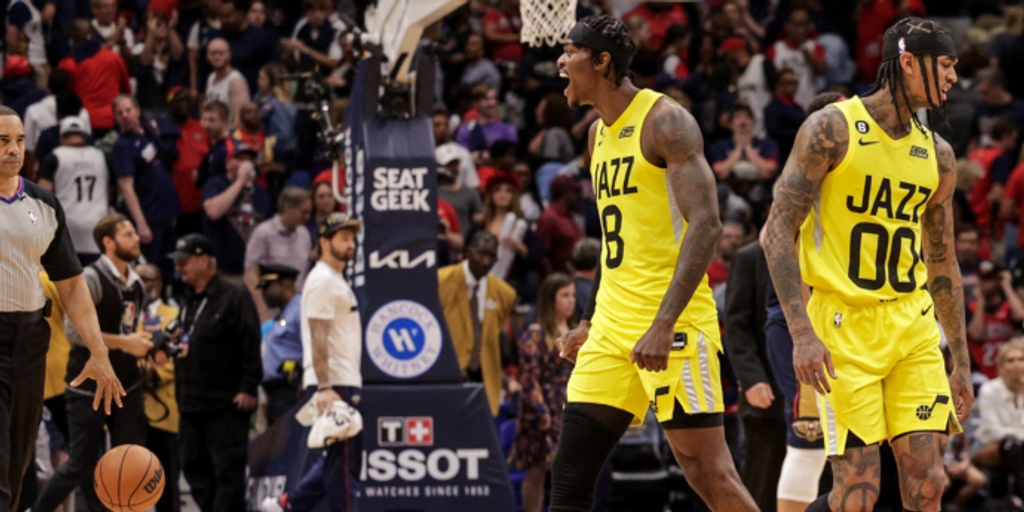 NEW ORLEANS (AP) — Kelly Olynyk doesn't want to get too giddy about how the Utah Jazz's offseason makeover is starting to look.

It sure is promising, though.

Lauri Markkanen capped a 31-point performance with clutch free throws late in overtime, Olynyk hit a go-ahead, driving scoop with 3 seconds to go, and the overhauled Jazz beat the New Orleans Pelicans 122-121 on Sunday night to remain unbeaten through three games under new coach Will Hardy.

“Top to bottom, guys are playing hard, playing the right way, playing together, unselfish,” Olynyk said. "It's been really fun to play the first three games.

“We're getting better and learning more about each others' games,” he added. “It's been showing and it's exciting.”

Utah had to regroup after losing a 17-point lead in the fourth quarter and trailing 110-107 when CJ McCollum hit a 3-pointer in the final minute of regulation. But Jordan Clarkson hit a tying 3 and Utah had the benefit of not having to play against Brandon Ingram or Zion Williamson in overtime.

Ingram left the Pelicans' home opener in the second quarter with concussion symptoms after a collision with teammate Naji Marshall. Williamson scored 25 points in his first regular-season game in New Orleans since May 4, 2021. But the star power forward also hit the floor hard on his lower back when Clarkson blocked his transition dunk attempt from behind in the fourth quarter.

“A really great play by J.C.,” Markkanen said of the block, which looked clean on video replays. “We have guys making that extra effort every game.”

Williamson, who checked out shortly after the play, never left the bench area to seek treatment. But also never re-entered the game. The Pelicans said afterward that he had a posterior hip contusion.

New Orleans then responded with a 25-5 run in which McCollum and Trey Murphy each scored nine and Larry Nance Jr. dunked twice.

“You definitely look at the things we did well and try to bottle those things up, but as I told our group, we can't wait to get hit first,” Green said. “We watched the film on Utah against Denver, we watched it against Minnesota. This is how they play. They're tough, they play fast, they offensive rebound the ball and they want to get a lot of 3s up.”

McCollum, who finished with 28 points, also scored six points in overtime, but his off-balance, 27-foot attempt from the right wing at the end of overtime bounced off the rim.

Olynyk, who finished with 20 points, said the Jazz set up his game-winning basket by running players across the court.

“Everybody fanned out, I thought I had a lane and took it and made a tough finger roll,” Olynyk said.

Markkanen was 9 of 17 shooting, made two 3s and all 11 of his free throws. Clarkson finished with 18 points.

“Our team’s got heart,” Hardy said. “The fourth quarter got hard — could not make a shot.

“Our guys just stuck with it,” Hardy added. "This group is fun."

Murphy scored 16 points for New Orleans. Ingram had 10 points in 11 minutes before checking out for good. Nance also scored 10.

The Pelicans hadn't trailed during either of their first two games at Brooklyn and Charlotte, but Utah dictated the pace of play in the first half.

“Their speed and their offensive rebounding hurt us,” Green said.

Utah led by as many as 11 points in the second quarter when Jarred Vanderbilt's free throws made it 63-52 shortly before halftime, capping a 10-4 run that also included Vanderbilt's 3 and finger roll.

Herb Jones' free throw made it a 10-point game at the half.

Pelicans: Jaxson Hayes saw his first action this season after coming back from a left elbow injury. He played just three minutes and missed his only shot. ... New Orleans had 43 bench points.

Jazz: At Houston on Monday night.