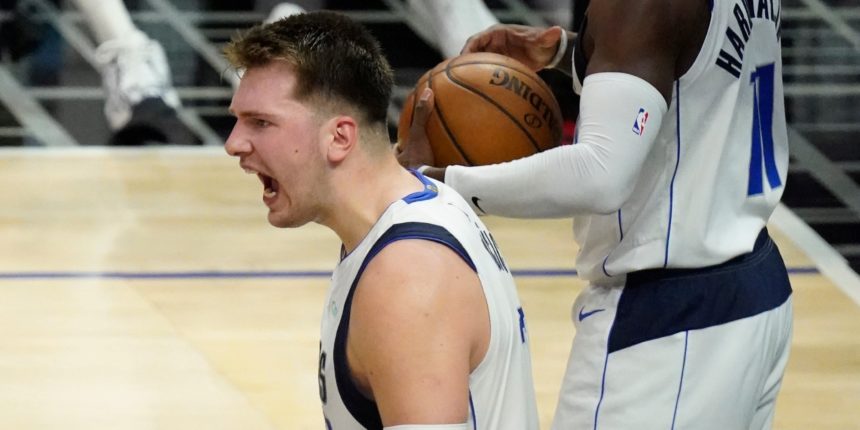 It took three quarters before Luka Doncic finally went quiet. The damage was already done, although his teammates kept the pressure on in the fourth.

Doncic scored 31 points and the Mavericks outshot the NBA’s leading team from 3-point range, beating the Los Angeles Clippers 113-102 on Saturday in Game 1 of the first-round playoff series.

Doncic was held to one point in the fourth on a free throw.

“I just know they’re going to send two guys at Luka. You’ve just got to be ready to shoot,” Finney-Smith said.

The Clippers gave up 68 points to four other players besides Doncic, including 14 to 7-foot-3 Kristaps Porzingis.

“We’re a strength-in-numbers operation,” Mavs coach Rick Carlisle said. “Luka is a great player and KP is a great player, but as a team we know that everybody has got to be ready and pull their weight when called upon.”

Kawhi Leonard had 26 points and 10 rebounds for the Clippers, and Paul George added 23 points. But they were a combined 3 of 14 on 3-pointers. As a team, the Clippers were 11 for 40 after leading the NBA at 41% during the regular season. Marcus Morris missed all six of his attempts.

“Our spirits are still high and we believe in ourselves,” Leonard said. “Nothing good comes easy.”

“I plan on this team bouncing back,” George said.

The Clippers didn’t make more than three 3-pointers in a quarter until the fourth, when they hit four. Dallas controlled the closing minutes, ending the game on an 18-5 run. The Clippers were limited to two baskets — both by George — over that stretch.

“We had a lot of bad plays, a lot of breakdowns, but when we were dialed in we had a great stretch where we took over the game,” George said. “That’s just got to be us all 48 minutes.”

The Clippers tied it at 60 early in the third on Patrick Beverley’s 3-pointer before the Mavs scored eight in a row to go up 68-60.

Leonard drew the Clippers within two on a steal and one-handed jam that left Maxi Kleber sliding across the baseline on his rear. But Finney-Smith scored on George’s turnover and Doncic hit a 3, keeping the Mavs ahead 86-80 to end the third.

Trailing by 10, the Clippers outscored the Mavs 26-13 over the end of the first and start of the second quarter to take their first lead. Rajon Rondo capped the spurt with back-to-back 3-pointers.

Beverley made consecutive baskets that put the Clippers ahead by four, but Dallas answered in a hurry. The Mavs ran off 11 straight points — including three 3-pointers by Doncic and Hardaway — to lead 60-55 going into halftime.

The Mavs came out charging, hitting six of their first nine shots and soon leading by 12 points. The Clippers had defenders in their faces as they missed nine of their first 11 attempts, with George tossing up airballs in both quarters.

Mavericks: Kleber had six points and nine rebounds after missing six of his last eight regular-season games with a sore right Achilles. ... Both Rick Carlisle and Tyronn Lue coached without masks on, something the league approved earlier in the day.

Clippers: Cardboard cutouts were added to make the lower bowl appear full of fans, although attendance continues to be limited by pandemic rules.

FACES IN THE CROWD

Hardaway enjoyed seeing fans, even opposing ones, in the stands. About 6,100 were on hand in a building that typically holds 18,000.

“Seeing people sitting courtside felt good,” he said. “That atmosphere, that presence of fans in the arena, watching, making sure the opposing team isn’t making free throws, doing everything to distract you. It levels up your awareness.”