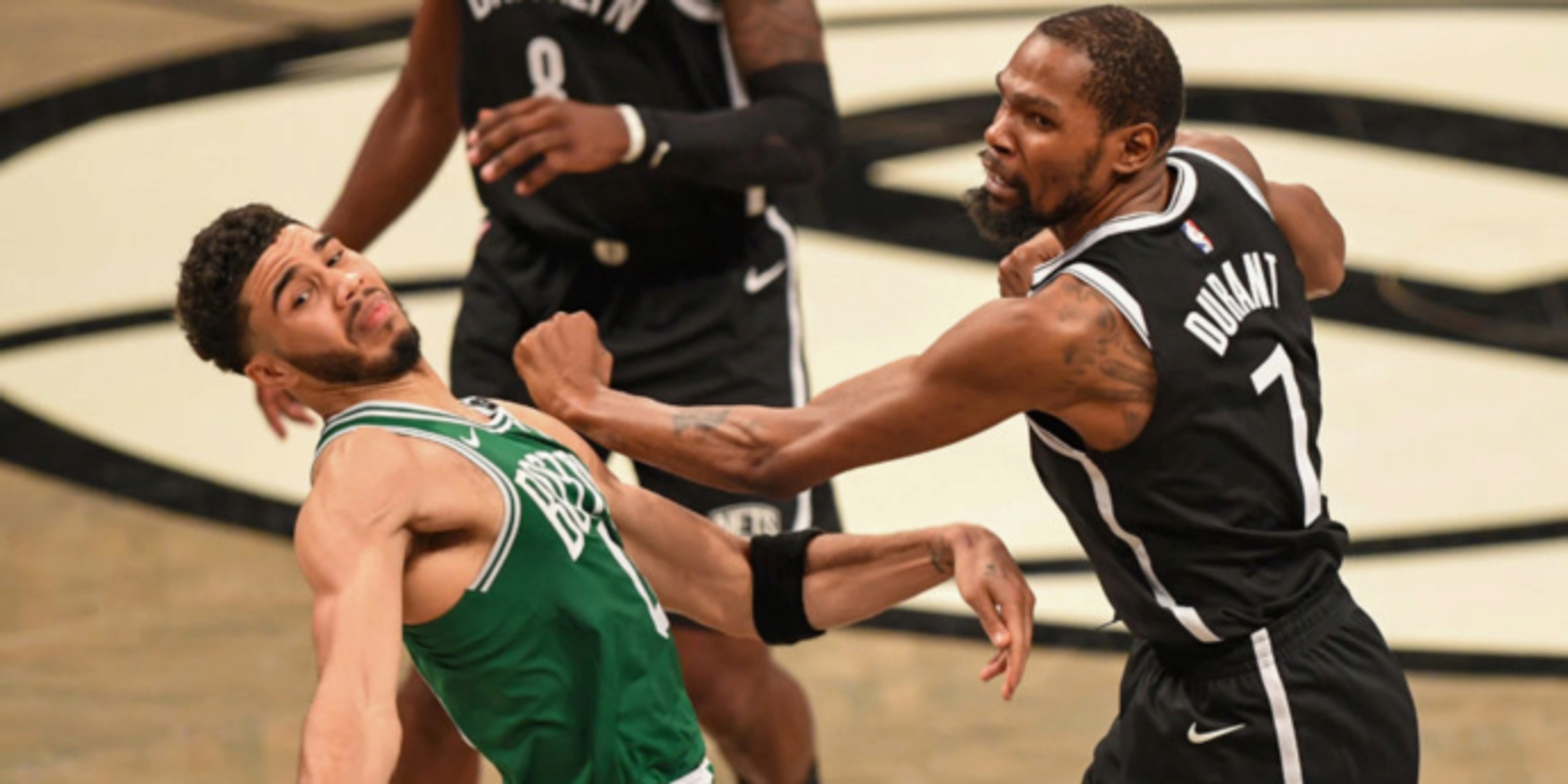 NEW YORK (AP) — Brooklyn's Big Three went from way off to off and running.

Kevin Durant had 32 points and 12 rebounds, Kyrie Irving scored 29 points and the Nets recovered from their superstars' frigid start to beat the Boston Celtics 104-93 on Saturday night in Game 1 of the first-round series.

James Harden finished with 21 points, nine rebounds and eight assists in just the ninth appearance of the season for the trio. The three combined to go 0 for 11 from 3-point range in the first half, then stormed out of the locker room with an 18-4 run to open the third and swing the lead the Nets' way for good.

Durant, Irving and Harden scored 28 of the Nets' 31 points in the period, with Joe Harris — who made Brooklyn's only 3-pointer of the first half — hitting another for the other points.

Harris had 10 points for the Nets, who announced a sellout crowd of 14,391 and host Game 2 on Tuesday night.

Jayson Tatum scored 22 points, but shot just 6 for 20 and couldn't come to his 50-point effort in the play-in tournament, when Boston beat Washington to earn the No. 7 seed.

To show how little time the Nets' stars spent together, Brooklyn started Harris and Blake Griffin with the Big Three. It was the first time those five started together all season and may have contributed to an ugly opening to the playoffs.

Durant, Harden and Irving were a combined 5 for 20 in the first quarter and the Nets missed all nine 3-point attempts in the period. Boston opened a 32-20 lead early in the second.

Things changed quickly after halftime. Harden made a 3 after four straight points by Durant out of the locker room. After two Boston baskets, it went: Irving 3, Durant 3, Durant jumper, Harden 3. That capped the 18-4 stretch and made it 65-57.

Irving and Durant combined for the finishing flurry in the fourth, a 12-2 run that extended a three-point lead to 94-81 on Irving’s follow shot.

Celtics: Robert Williams III had 11 points, nine rebounds and nine blocked shots. He has been battling turf toe and it wasn't certain he would play until after he warmed up. ... Marcus Smart scored 17 points.

Nets: Irving, who spent two seasons with the Celtics, wore green sneakers. ... Brooklyn's starting lineup was its 39th different one of the season, having set a franchise record during the regular season. ... Durant moved past former San Antonio guard Tony Parker (4,045) points into ninth place on the career playoff scoring list. Durant has 4,075.

Boston's Brad Stevens and the Nets' Steve Nash both coached without masks, now allowed for coaches who are fully vaccinated. Stevens said it helped that players could see his mouth again, because with the bigger crowds now in arenas, it would become tougher to hear his instructions.

But there was a benefit to having his mouth covered.

“As I always say, with an 11- and 15-year-old at home it’s been a lot easier to not say the wrong thing with the mask on and not get caught on the internet than maybe it was before,” he said.

The Nets have won eight straight playoff games against the Celtics and are 9-2, with a six-game victory in the 2002 Eastern Conference finals and a sweep in the 2003 East semis. It’s the Nets' highest and Celtics' lowest winning percentage against an opponent in the postseason.