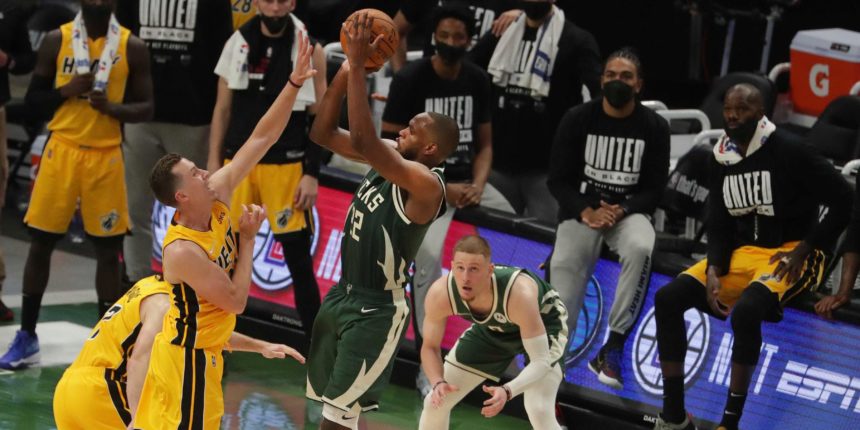 Khris Middleton lifts Bucks past Heat in overtime in Game 1

MILWAUKEE (AP) — Giannis Antetokounmpo and the Milwaukee Bucks found themselves in danger of suffering one more devastating playoff loss to the Miami Heat.

Khris Middleton made sure it didn’t happen.

Middleton broke a tie with a jumper with 0.5 seconds left in overtime and had 27 points to help the Bucks beat the Heat 109-107 on Saturday in Game 1 of the first-round series.

The nip-and-tuck nature of this game — nobody led by more than four points in the fourth quarter and overtime — exemplified the competitive nature of this playoff rematch. Game 2 is Monday night in Milwaukee.

Milwaukee was the No. 1 overall seed in last year’s playoffs but lost 4-1 to Miami in the second round. Milwaukee is seeded third and Miami sixth in the Eastern Conference this time.

“The pressure was all on them,” said Miami’s Goran Dragic, who scored 25 points and tied it with a corner 3-pointer with 20.6 seconds left. “They need to win at home. It was a close game. I feel like we had our chances, but unfortunately we didn’t take them.”

Milwaukee squandered opportunities to seal the victory before the final second of overtime.

Over the last 1:06 of regulation, Antetokounmpo was 2 of 5 from the line and had a 10-second violation that prevented him from getting another free-throw attempt.

Antetokounmpo wore a sleeve on his left arm late in the game after appearing to grab his elbow late in the fourth quarter. He still had 26 points, 18 rebounds and five assists but shot 10 of 27 overall and 6 of 13 on free-throw attempts.

“I just tried to stay aggressive the whole game,” Antetokounmpo said. “That’s what I’m going to try to do the whole series, miss or make.”

Milwaukee’s struggles from the line enabled Miami’s Jimmy Butler to force overtime by making a buzzer-beating driving layup past Antetokounmpo.

Dragic tied it again in the final minute of OT. Milwaukee opted against calling a timeout afterward and instead went right to its offense.

“It shows the trust we have in one another,” Middleton said. “On the fly, sometimes we don’t have to call a timeout. We can execute our sets and everyone get to their spots and get the best shot out of it.”

Middleton dribbled toward the free-throw line, then cut to his right and made a 19-footer while being closely guarded by Duncan Robinson.

“In that situation, you’ve got to make somebody miss,” Robinson said. “Could it have been better? For sure. I will be. I’ll learn from it. This obviously stings a lot, but we’ve got to have a short memory - learn from it and move forward.”

Miami went 20 of 50 on 3-pointers while the Bucks were just 5 of 31. Milwaukee had never made below seven 3-pointers in a game during the regular season.

“We don’t need 3′s to win,” said Milwaukee’s Jrue Holiday, who missed all five of his 3-point attempts but had 20 points and 11 rebounds. “We do a lot of everything.”

The Bucks compensated by outscoring the Heat 56-24 in the paint and outrebounding Miami 64-51. Butler and Bam Adebayo shot a combined 8 of 37 for the Heat, with Butler going 4 of 22 while Adebayo was 4 of 15.

Butler still had 17 points to go along with 10 rebounds and eight assists. He was sometimes defended by Antetokounmpo.

“The ball is going to be in his hands a lot,” Antetokounmpo said. “He draws a lot of attention and you’ve got to be ready to go against him, but I love the challenge. Last year I didn’t have the chance to guard him as much.”

This game featured the largest attendance for a Milwaukee home game this season.

The Milwaukee Health Department’s revised pandemic-imposed guidelines enabled the Bucks to fill 50% of Fiserv Forum’s seats this season, resulting in crowds of about 9,000. The Bucks had closed the regular season playing home games at 18% capacity, or roughly 3,300 fans.

Crowds will get even bigger when this series moves to Miami for Game 3 on Thursday. The Heat announced Saturday they could have as many as 17,000 fans for their home playoff games

Heat: This marks the third time the Heat have faced the Bucks in the postseason. The Heat swept the Bucks in the first round in 2013 before knocking off Milwaukee in the second round last year.

Bucks: Holiday scored an unusual basket late in the second quarter. It appeared as though Holiday was attempting a lob to Antetokounmpo, but the ball instead went through the hoop. … … The Bucks are making their fifth straight playoff appearance to match the second-longest streak in team history. They reached the postseason 12 straight times from 1980-91.