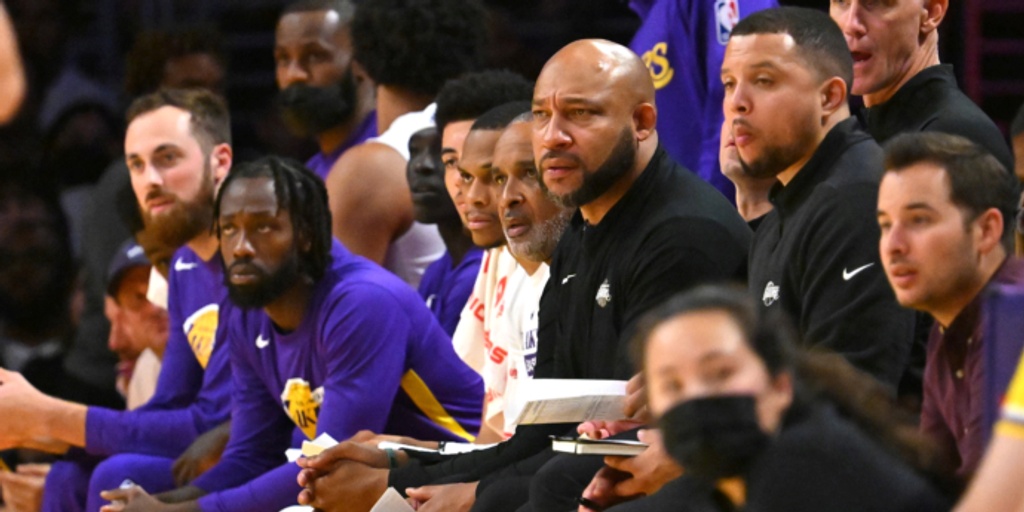 LOS ANGELES (AP) — Darvin Ham was still a fringe NBA player during the first two seasons of LeBron James' career. While James went on to forge the glittery path that's likely to make him the top scorer in league history this winter, Ham carved out a coaching career that has brought them together with the Los Angeles Lakers just in time for James' 20th season.

The Lakers hope that Ham's fresh leadership will produce big results for the 17-time NBA champions, because that's the most substantial change this franchise has made despite its dismal finish to last season.

“This year, we’ve turned the page,” said Ham, the longtime Milwaukee assistant who took over for Frank Vogel. “We’re looking out through the windshield. Not so much through the rearview mirror.”

None of the Lakers want to see what's behind them, and with good reason: LA went 33-49 last season and missed the playoffs despite being a hot preseason pick for title contention after adding Russell Westbrook to team up with James and Anthony Davis.

The Lakers were unable to move Westbrook and his $47.1 million contract in the summer, so they're returning with the Big Three surrounded by a mostly new supporting cast that's much younger and more athletic than last year's group of 30-something veterans.

But the biggest addition is the 49-year-old Ham, who paid plenty of dues on the way to his first head coaching job. His big messages to the Lakers are oriented around hard work, a team-first mentality for every player and an overall commitment to defense that waned last year after LA was an elite defensive team in its last championship season.

“Every single day continues to get better and better,” James said. “The transparency that we have, from the day he was granted the head coaching job here, it’s been great. We’ve had multiple conversations. I think it was well overdue for him to be a head coach, and (I’m) overjoyed to be part of his journey.”

After Vogel and Westbrook clashed, Ham landed one of the most glamorous coaching jobs in sports by setting out a plan to get the most out of the 2017 NBA MVP. Ham and Westbrook have stayed close since the coach's arrival, and both say the high-scoring guard is eager to play whatever role is required to rescue his career and his Lakers tenure.

“Just being able to communicate and connect, to me, is already a positive,” Westbrook said. “We’ve talked about many different things which don’t always pertain to basketball. It creates a relationship.”

Lakers fans are skeptical after Westbrook's much-derided play in 2021-22, but Ham is confident.

Davis' injuries are the single biggest reason Los Angeles has struggled for the past two seasons. The eight-time All-Star has played in only 81 of the Lakers' 160 games since they raised the trophy, and he managed to play together with James and Westbrook only 21 times last season.

Davis doesn't apologize for injuries, and he says he's doing everything possible to stay healthy this year. He scoffs at fans who “want me to be this Greek god. I’m not going to put that pressure on myself. I’m going to go out there and compete at the highest level and do my best to help this team win.”

If James stays healthy and typically productive, he will surpass Kareem Abdul-Jabbar's career scoring record by early February. Although James and Abdul-Jabbar have a frosty relationship, James said the chance to be mentioned with the great Lakers center will be “just super-duper dope. When it gets here, I’m not going to put too much pressure on it throughout the season, but it’s going to be a historical moment, as long as my friends and family are there.”

The Lakers are likely to have at least eight newcomers on their roster, headlined by two dynamic veteran point guards: Patrick Beverley and Dennis Schröder, who is back in Hollywood after a year away. Big men Damian Jones and Thomas Bryant also returned to the Lakers after stints elsewhere, while Troy Brown Jr., Juan Toscano-Anderson and Lonnie Walker IV will get a chance to become the dynamic wing scorers that James' Lakers have usually lacked. While the roster isn't objectively better than last year's group, GM Rob Pelinka believes it's more athletic and hopefully more durable.

Jones began the preseason as the Lakers' starting center alongside the Big Three and Kendrick Nunn, the point guard who missed the entirety of last season with a bone bruise. Davis' annual reluctance to play center could mean more playing time for Jones and Bryant, but Ham also might be successful in persuading Davis that the Lakers are at their best when Davis is dominating slower defenders as the tallest LA player on the floor.