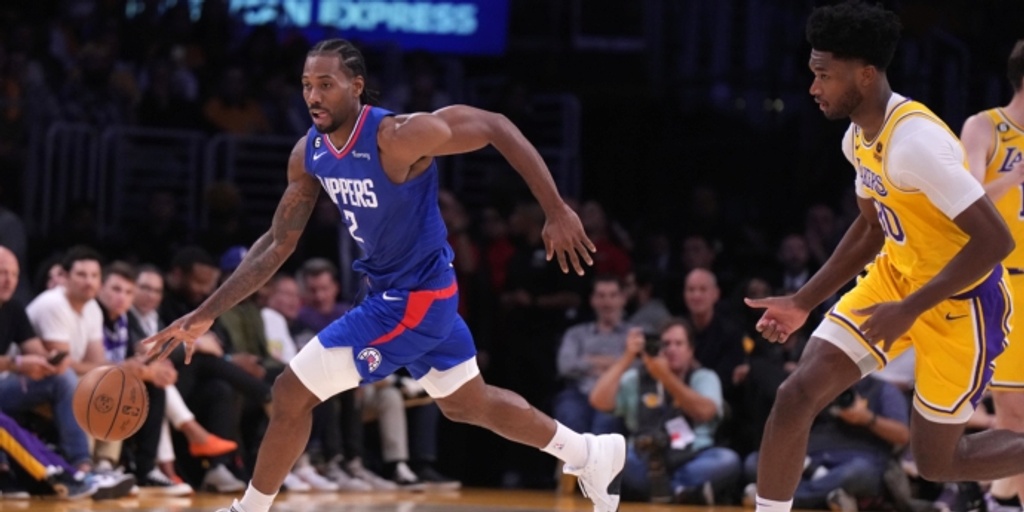 LOS ANGELES (AP) — Kawhi Leonard had 14 points and seven rebounds in his first game in 16 months, and the Los Angeles Clippers opened a season of sky-high expectations with a 103-97 victory over the Los Angeles Lakers on Thursday night.

Paul George scored 15 points and John Wall added 15 in his debut for the Clippers, who held on down the stretch to beat their more pedigreed Los Angeles rivals for the eighth consecutive time.

Leonard came off the bench for the first time since 2013 and played 21 minutes in his first game since he tore a ligament in his right knee in a playoff game in June 2021. The two-time NBA Finals MVP decided to ease back in a temporary reserve role after missing all of last season while recovering from surgery.

The Clippers' high hopes for their first championship rest largely on Leonard's ability to return to elite form. They failed to get out of the play-in last spring without Leonard and with only 31 games from George, but both are healthy now alongside five-time All-Star Wall, who provided an immediate spark.

Anthony Davis scored 25 points despite apparently having reduced mobility after a mid-game fall, while LeBron James had 20 points and 10 rebounds in the 20th home opener of his career. Lonnie Walker scored 26 points.

The Lakers dropped to 0-2, but still rallied from two large deficits and kept it close into the final minute despite nightmare shooting performances from Russell Westbrook (0 for 11) and fellow point guards Patrick Beverley (1 for 7) and Kendrick Nunn (0 for 7) in their Lakers home debuts. The Lakers went 9 for 45 on 3-pointers overall.

Westbrook again struggled on offense, but made several impressive defensive plays while guarding Leonard down the stretch.

The oft-injured Davis gave fans a fright when he crashed to the floor after being undercut in the third quarter. He got up and went to the tunnel to stretch, but returned a few minutes later.

The Clippers broke open a close game immediately after Davis left the floor, eventually scoring 17 consecutive points in less than three minutes. But the Lakers erased that 15-point deficit with a 24-7 run, even taking the lead with 8:01 to play on an alley-oop from Austin Reaves to Walker.

Leonard suggested the idea of coming off the bench until he feels fully up to speed, and coach Tyronn Lue agreed with the temporary measure. Leonard had started 447 consecutive regular season games and 100 playoff contests since Nov. 10. 2013, when he came off the bench for the Spurs in New York early in his third NBA season.

Lakers coach Darvin Ham said he briefly spoke to Westbrook about the guard's claim that coming off the bench possibly contributed to his preseason hamstring injury because he didn't know how to warm up properly for a reserve role after spending the previous 13 years as an NBA starter. Ham said he and the Lakers “would in no way, shape or form put a player in harm's way."

Westbrook's struggles with the Lakers have prompted significant discussion about whether they would be a better team with Westbrook coming off the bench and leading the second unit, but Westbrook and Ham aren't ready to try it yet.

Clippers: At Kings on Saturday.