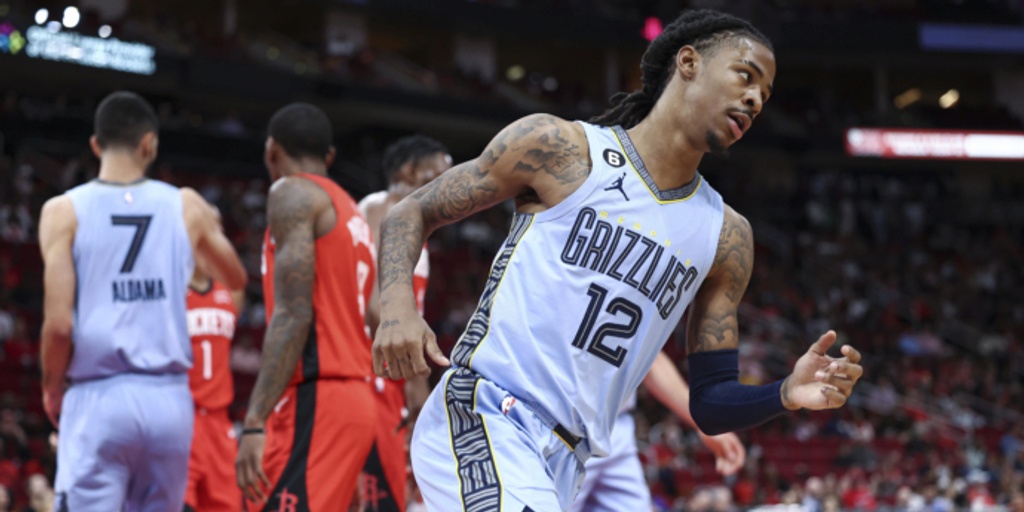 HOUSTON (AP) — Ja Morant scored 49 points and hit five 3-pointers to lead the Memphis Grizzlies to a 129-122 victory over the Houston Rockets on Friday night.

Morant carried the team on a night Desmond Bane and Tyus Jones struggled. Bane made just 3 of 16 shots for 14 points and Jones was 4 for 13 with 11 points.

The Rockets led by 16 in the first half before the Grizzlies used a big run to start the third quarter and take the lead.

A basket by Brandon Clarke put Memphis up by two points before Garrison Mathews and Jabari Smith Jr. made back-to-back 3-pointers to put Houston up 108-104 with about nine minutes to play.

Morant scored five points in a 10-0 spurt that gave Memphis a 118-110 lead with six minutes left.

Jalen Green, the second pick in the 2021 draft, led the Rockets with 33 points. But he struggled after halftime and scored just 13 points in the second half. Alperen Sengun added 23 points for the Rockets, who fell to 0-2 this season.(backslash)

Morant had another great game after scoring 34 points in the opener to lead Memphis to a 115-112 overtime victory over the Knicks.

He made his first five 3-point attempts and didn’t miss until he threw up a shot late in the fourth quarter to avoid a shot- clock violation.

Houston led by eight at halftime before the Grizzlies opened the second half with an 18-9 run to take an 80-79 lead with about eight minutes remaining in the third quarter.

Morant had nine points in that span and Bane capped it with a 3-pointer.

The Grizzlies remained up by one a couple of minutes later after a dunk by Morant before Green made a 3-pointer to put Houston on top 87-85.

Houston trailed by 3 later in the third before scoring the last eight points of the quarter, with a 3-point play by Tari Eason, to take a 100-95 lead into the fourth.

Grizzlies: Memphis made 19 of 42 3-pointers. … Bane had seven assists and six rebounds. … John Konchar had 17 points and made three 3-pointers.

Rockets: Smith, the third overall pick in this year’s draft, had 10 points after scoring 17 in his NBA debut Wednesday. … Kevin Porter Jr. scored 18. … Bruno Fernando left the game in the fourth quarter with left knee soreness.

Grizzlies: At Dallas on Saturday night.

Rockets: At Milwaukee on Saturday night.