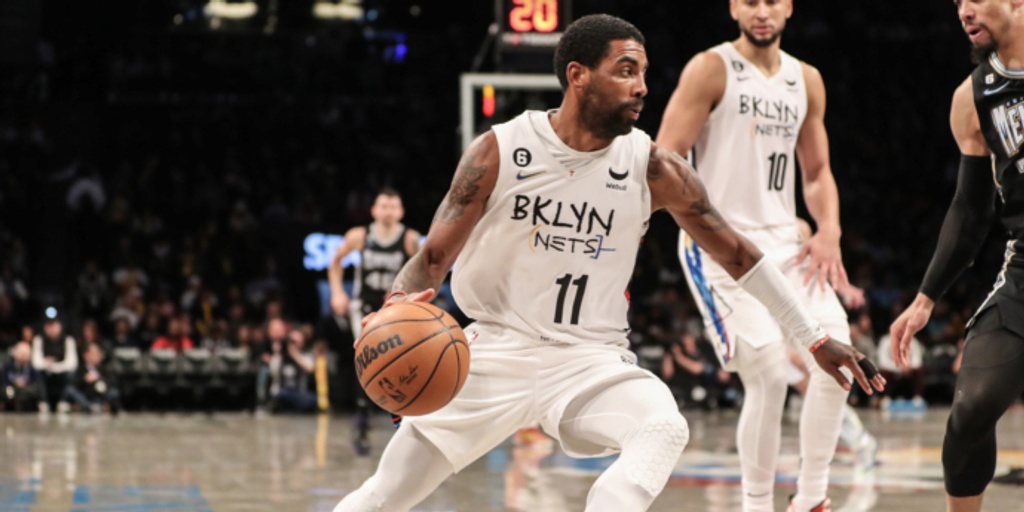 Irving has 14 points after rejoining Nets, seeks to focus on basketball

NEW YORK (AP) — Kyrie Irving apologized Sunday morning to anyone who felt threatened or hurt when he posted a link to a documentary with antisemitic material, clearing the way to finally play again for the Brooklyn Nets.

Once he did, Irving tried to keep the focus on basketball. Deeper conversations, such as about the demonstrators outside the arena or a possible appeal of his suspension without pay, would be left for another day.

“I’m just here to focus on the game,” Irving said after scoring 14 points in helping the Nets to a 127-115 victory over the Memphis Grizzlies.

Irving had missed eight games since he was suspended by the team on Nov. 3, hours after he refused to say he had no antisemitic beliefs when meeting with reporters at the Nets’ practice facility.

Back at the building for the team's morning shootaround, Irving said he should have handled that interview differently.

“I don’t stand for anything close to hate speech or antisemitism or anything that is going against the human race,” Irving said. “I feel like we all should have an opportunity to speak for ourselves when things are assumed about us and I feel it was necessary for me to stand in this place and take accountability for my actions, because there was a way I should have handled all this and as I look back and reflect when I had the opportunity to offer my deep regrets to anyone that felt threatened or felt hurt by what I posted, that wasn’t my intent at all.”

Fans arriving at Barclays Center for the game found the plaza area filled by dozens of members of the group Israel United in Christ, Black men chanting and handing out paraphernalia that contained antisemitic material. The organization's website says its mission is to “wake up the 12 Tribes of Israel.”

Asked about having that group's support, Irving said he hadn't seen them, adding that it was “a conversation for another day.”

As for whether action against the Nets was coming — members of the National Basketball Players Association, including executive director Tamika Tremaglio, were at shootaround and the game — Irving said others would be handling that for him.

“I’m sure some things will be done in the future,” Irving said. “There’s no timetable on that right now.”

Irving said he was initially searching for more information about his heritage when he posted a link to “Hebrews to Negroes: Wake Up Black America” on his Twitter page. When first asked about it, he was defiant about his right to post material that interested him. Then, he refused to apologize or clarify his religious beliefs during another interview a few days later, leading to his suspension.

“I was rightfully defensive that there was an assumption that I could be antisemitic, or that I meant to post a documentary to stand side by side with all the views in the documentary,” Irving said, adding, “How can you call someone an antisemite if you don’t know them?”

But his tone was more reflective while speaking for about 12 minutes Sunday morning, thanking family and friends for their support.

“I meant no harm to any person, to any group of people and yeah, this is a big moment for me because I’m able to learn throughout this process that the power of my voice is very strong, the influence that I have within my community is very strong, and I want to be responsible for that,” Irving said. “In order to do that, you have to admit when you’re wrong and in instances where you hurt people and it impacts them.”

Nike suspended its relationship with Irving and the fallout seemed to further strain the relationship between Irving and the Nets, who declined to give him a contract extension last summer. He missed most of their home games last season when he refused to get vaccinated against COVID-19, as was mandated at the time in New York City.

The organization said he was “unfit to be associated with the Brooklyn Nets” when it suspended him. But the Nets praised Irving on Sunday for the steps he has since taken, though it's unclear what those entailed.

“Kyrie took ownership of this journey and had conversations with several members of the Jewish community," the team said in a statement. "We are pleased that he is going about the process in a meaningful way.”