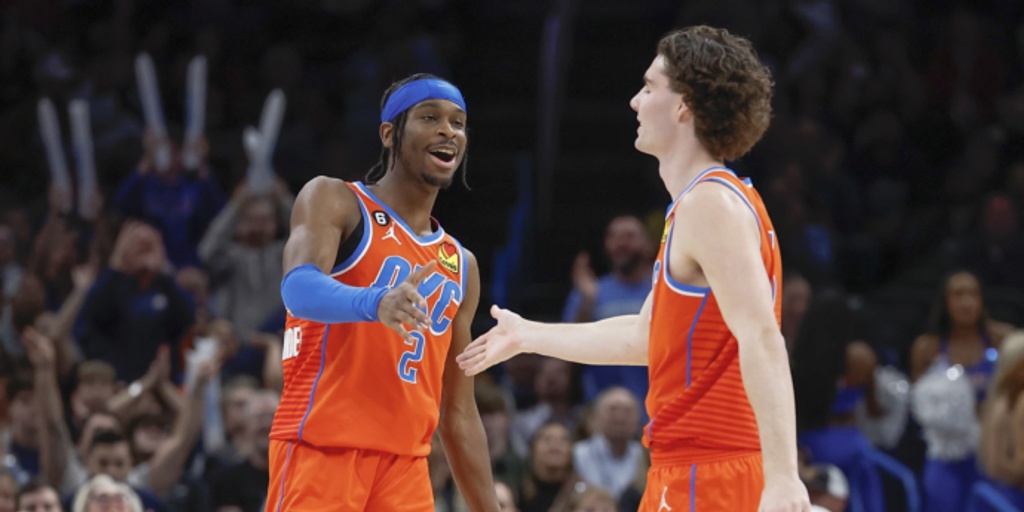 It was supposed to be a showdown between two of the league's top scorers in Gilgeous-Alexander and Dallas guard Luka Doncic, but Doncic — the NBA’s scoring leader with 34 points per game — sat out with a sore left ankle. Doncic had 34 points, 10 rebounds and 10 assists Saturday in a win over the New Orleans Pelicans.

Even with Doncic out, the Thunder knew they couldn’t afford to take it easy.

“It’s a testament to their maturity and their commitment level,” Thunder coach Mark Daigneault said of his players. “And really, it’s (a) zero and zero mindset, it’s a 48-minute game, it’s being where your feet are inside of the game.”

Gilgeous-Alexander, a guard who entered the night fourth in the league with 30.9 points per game, made 11 of 17 field goals and 11 of 13 free throws. Christian Wood, who led the Mavericks with 27 points and 16 rebounds, said his team knew the scouting report on Gilgeous-Alexander and it didn't matter.

It was Oklahoma City's third straight double-digit win at home to start the new year. The Thunder beat Boston 150-117 on Jan. 3 and Washington 127-110 on Friday.

Spencer Dinwiddie had 21 points and eight assists for the Mavericks, who have lost five of eight.

Oklahoma City led 69-55 at halftime, then Gilgeous-Alexander took over in the third quarter. He drove to the hoop, was fouled and somehow flipped the ball in with 28 seconds left in the period. His free throw gave the Thunder a 94-82 lead. His floater at the buzzer rattled in to push Oklahoma City's edge to 96-83. He scored 17 points in the quarter on 7-for-10 shooting from the field.

The Thunder put it out of reach in the fourth. A steal by Gilgeous-Alexander led to a dunk by Lu Dort that put Oklahoma City ahead 116-98 with 4:26 to play.

Daigneault said the Thunder turned the tide with defense.

“Second-quarter defense was great, second-half defense was pretty good,” he said. “I thought they earned the stuff they got in the second half.”

Thunder: Shot 54.3% from the field in the first half and made 9 of 15 3-pointers. ... Reserves outscored Dallas' 35-27 ... G Josh Giddey played just 26 minutes because of foul trouble. He finished with 10 points, five rebounds, five assists and five fouls.

Giddey has struggled with 3-pointers in his short career, but the second-year guard has found his stroke lately. The career 29% 3-point shooter has made 9 of 18 from beyond the arc in his past four games and brought his season percentage up to 35.5%.