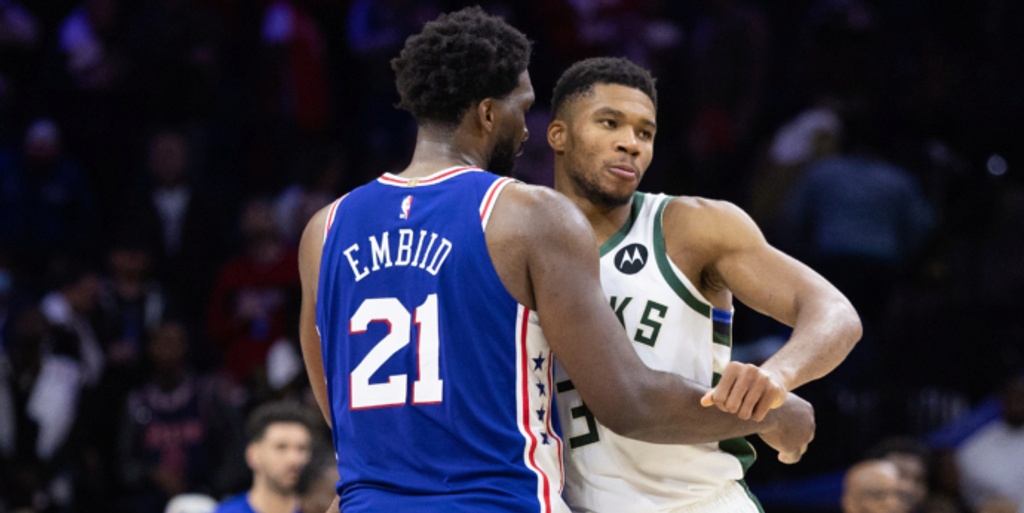 PHILADELPHIA (AP) — Wesley Matthews hit the go-ahead 3-pointer with 23.8 seconds left, and Giannis Antetokounmpo had 21 points and 13 rebounds to lead the Milwaukee Bucks to a 90-88 victory over the Philadelphia 76ers on Thursday night.

Brook Lopez scored 17 points as the Bucks, who went 0-5 in the preseason, won their season opener after Matthews surprised the Sixers on the long 3. James Harden, who scored 31 and rallied the Sixers in the fourth, missed a jumper that could have won the game.

The 76ers lost their opener Tuesday night in Boston and had another weak defensive effort that had the Philly crowd booing them off the court in the third quarter.

Joel Embiid had 15 points and 12 rebounds. Tyrese Maxey added 15 points for the Sixers.

Embiid, who had offseason surgery to repair a torn ligament in his right thumb, had another four turnovers. He had six against the Celtics.

“It does affect you for a long time, especially if he gets hit,” coach Doc Rivers said. “Those are still raw moves. As a big, I’m assuming he gets hit every game. You’re not injured, it’s just painful.”

Harden finally got the Sixers rolling in the fourth when he scored eight straight points and cut a 12-point deficit to single digits. Trying to bulk up the defensive lineup with toughness, Rivers turned to Harden, Tobias Harris, P.J Tucker, De’Anthony Melton and Daniel House Jr.

The 76ers forced shot clock turnovers and forced the Bucks out of bounds. Tucker stole the ball and hit Harden for the layup that made it 80-all with 6:41 left. Harden, whose nagging hamstring injuries from last season seem behind him, flexed for the crowd that roared in approval.

His bucket capped a 13-0 run, all done with Embiid on the bench.

Antetokounmpo snapped the tie when he pushed through for Milwaukee’s first basket in more than four minutes.

Bucks: Coach Mike Budenholzer used a walking cane before the game and hobbled in a walking boot during the game following surgery on his right ankle. ... Rivers said Bucks guard Jrue Holiday reminded him of former 76ers point guard Mo Cheeks, whose No. 10 is retired by the team. Holiday, who started his career with the Sixers, missed 13 of 15 shots. “I don’t think he gets enough recognition,” Rivers said. “I don’t know another guard that is a better defensive player than him. I would not want to see him every night.”

76ers: Fanatics founder Michael Rubin sold his stake in the company that owns the Philadelphia 76ers and New Jersey Devils to David Adelman. Adelman is the third-largest shareholder behind owners Josh Harris and David Blitzer.

76ers: Trust the Process! Long-time coach Brett Brown, who shepherded the Sixers' rebuilding process that brought them Embiid, returns Saturday as an assistant coach for the San Antonio Spurs.