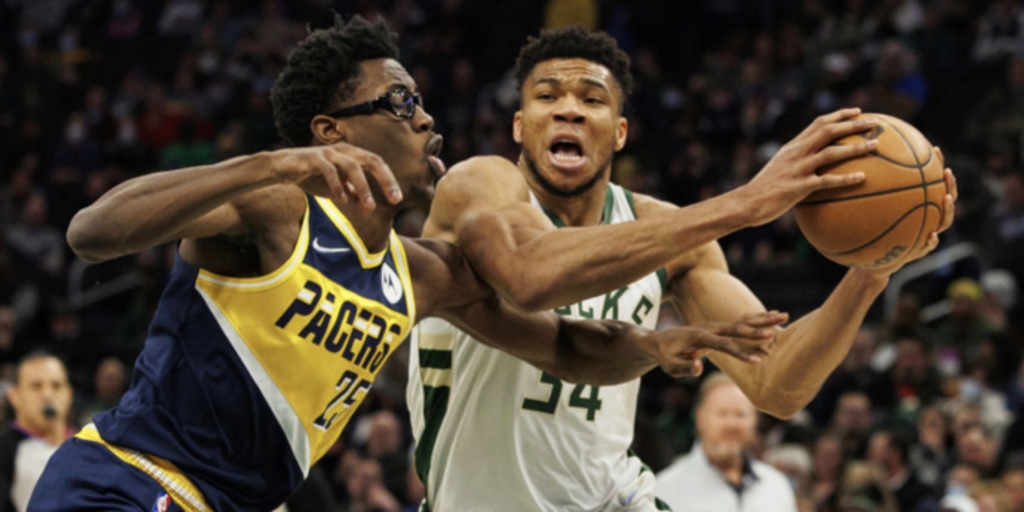 MILWAUKEE (AP) — Giannis Antetokounmpo scored a season-high 50 points, two off his career best, and pulled down 14 rebounds to lead the Milwaukee Bucks past the skidding Indiana Pacers 128-119 on Tuesday night.

The Bucks (36-23) swept the four-game season series from the Pacers and have won eight straight against their Central Division foe.

Antetokounmpo, who didn’t play in Milwaukee’s loss to Portland on Monday night because of a sore left ankle, showed no ill effects as he racked up 12 first-quarter points that included a pair of thunderous dunks and a 3-pointer.

Antetokounmpo set a career high with his seventh 40-point game of the season and scored 50 for the first time since the memorable title-clinching game in the NBA Finals last season, which gave the Bucks their first championship in 50 years.

Both teams had only 10 players available due to injuries.

Buddy Hield scored a season-high 36 points and Tyrese Haliburton had 17 points and eight assists for Indiana.

The Bucks led 34-27 after the first quarter before the Pacers grabbed a short-lived lead midway through the second. A pair of 3-pointers by reserve guard Lindell Wigginton sparked a 12-2 surge that grew the lead to double digits. Milwaukee led 69-63 at halftime, paced by Antetokounmpo’s 18 points.

Milwaukee built a pair of nine-point leads in the third but couldn’t shake the Pacers. When Indiana got close again in the fourth, Antetokounmpo swished a 3-pointer and added a pair of free throws after a clear-path foul and Milwaukee eventually increased its lead to 14 before holding off the Pacers down the stretch.

Pacers: G Chris Duarte (sore left big toe), F Isaiah Jackson (right ankle sprain), G Malcolm Brogdon (sore right Achilles) and C Myles Turner (left foot issue) all sat out. … Haliburton didn’t attempt a shot from the field until sinking a 3-pointer about four minutes into the second quarter. … Scored 13 points off nine Milwaukee turnovers in the first half. … Keifer Sykes had 10 points off the bench. … Lance Stephenson was whistled for a flagrant 1 foul after hitting Antetokounmpo in the face battling for a loose ball. ... Jalen Smith fouled out while playing only 17 minutes.

Bucks: G Wesley Matthews didn’t play due to right toe soreness and G George Hill missed his eighth consecutive game with a neck issue. …Wigginton scored a career-high 12 points, topping his previous mark of 11 set a night earlier. ... Serge Ibaka, who started in place of Antetokounmpo on Monday, had nine points in 24 minutes in his second game with Milwaukee after being acquired from the Los Angeles Clippers.