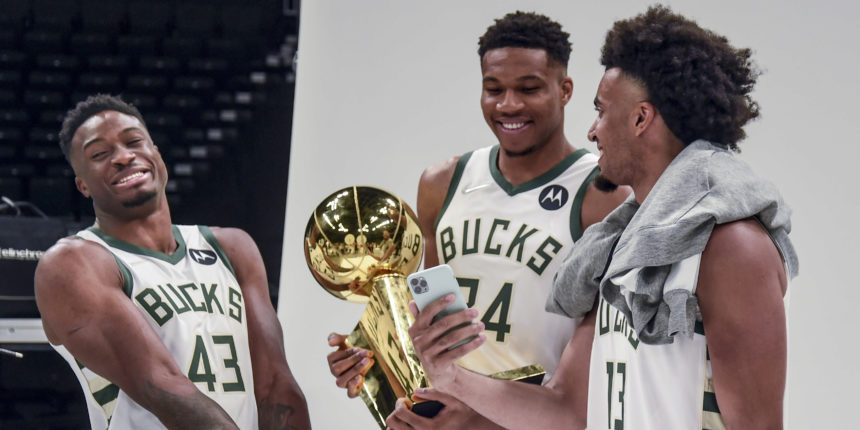 Coming off a championship season in which he won NBA Finals MVP, Giannis Antetokounmpo is getting ready for the upcoming NBA season and hoping to duplicate the success he and the Milwaukee Bucks had last season. After a few early exits in the playoffs, the Bucks in some ways surprised many people by winning it all in 2020-21. (A lot of people saw them as a title contender, but put other teams ahead of them in the power rankings). But after facing criticism regarding his shooting in the playoffs, Giannis was able to find his groove and navigate his team to its first championship in 50 years.

In an interview with the Greek television station COSMOTE TV, Giannis talked about his mindset coming into the next season. Being modest, as he usually is, he believes he shouldn’t be called an MVP or a champion because that might distract him from his goals. On the other hand, it’s known that Giannis doesn’t have the habit of working out with other NBA players in the summer, and he gave a more precise reason as to why that is.

“I can’t be fake. I am Giannis. But calling me MVP, calling me champ, calling me the best player in the world is something that might hold me back. And I don’t want anything holding me back. I want to look forward and be better," Giannis told COSMOTE TV.

"That’s why I don’t train with other players. I don’t want to be 'buddy' with them. If we do this and then drink a coffee with them, can I go on the court and use my elbow against them? Can I block or dunk on them? I can’t 'cause I am authentic. If I love someone, I love him also on the court. I am fully aware of that, and I don’t want to put myself in this position.”

Giannis also reflected back on the NBA Finals series against the Phoenix Suns in which Milwaukee lost the first two games. After losing Game 1 and Game 2 as Giannis played on a hyperextended knee that he sustained during the Eastern Conference Finals, it seemed that the Bucks wouldn’t have much of a chance to bounce back. However, they made the proper adjustments heading into Game 3, and Giannis was able to clear his thoughts from the fans teasing him about his free-throw shooting. He even admitted to talking with a sports psychiatrist because it was affecting his confidence.

"I shouldn’t [have been] playing in the Finals. I was hurt in Game 1. I was praying. We lost. In Game 2, I scored 40 and we lost. I was sh***ing in my pants, I was hurt," Giannis said. "After that, we just wanted to defend our home. But then my teammates reacted, the team reacted, Jrue [Holiday] was all over the place.

Everything Giannis said is why NBA fans love him so much. His mindset is similar to the older generation of players. He doesn’t want to be friends with his peers because of his competitive spirit and how it might affect his performance. NBA players practicing together over the summer has become a theme for the past few years, and even though many of them say that it's the best way to improve their game, fans often disagree with that buddy-buddy approach.

Giannis Antetokounmpo continues to do things his own way, and it’s paying off big time for the Bucks.