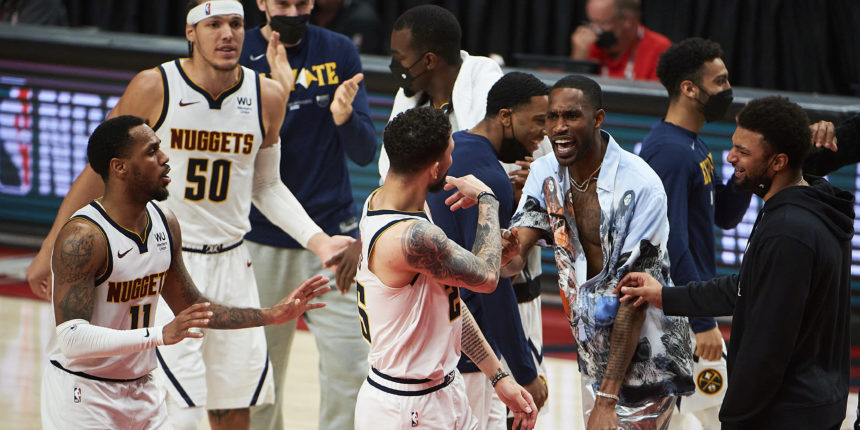 With several key injuries, the Denver Nuggets tuned out the skeptics heading into the playoffs.

Third-seeded Denver bested the Portland Trail Blazers in six games to survive the first round and advance to the Western Conference semifinals. They'll play the Phoenix Suns, who eliminated the defending champion Los Angeles Lakers in six games.

“I think we just have such a tight-knit group that doesn’t even listen to the noise,” Michael Porter Jr. said. “I mean, dudes don’t even pay attention to it. I don't even think (Nikola Jokic) has social media. I don’t get on social media. So like we don’t really hear some of the noise, and that helps keep us locked in."

This season, Denver's prospects going into the playoffs were dimmed by the loss of Jamal Murray, who tore his left ACL in mid-April and required surgery. Murray was averaging 21.2 points, second on the team to MVP candidate Nikola Jokic.

Murray was not the only one. Will Barton hasn't played since late April because of a strained right hamstring. PJ Dozier is out with a right adductor strain.

“You see all these other teams in the playoffs, and a lot is made of guys being out with injuries -- guy’s gonna miss a game, he’s gonna miss another game. I mean Jamal Murray has been out for 24 games now, and look what we’ve done without a guy that was one of the best players in the bubble last year," coach Michael Malone said.

The Nuggets, in late April, signed journeyman Austin Rivers, who assumed a starting role and hit four straight 3-pointers during a crucial stretch in Game 3 that propelled Denver to a 120-115 victory.

“That’s why I love this group, because no matter who you call upon, they’re ready to go out there and simply do their job, and that’s all you can ask,” Malone said.

Jokic, of course, led the Nuggets in the six games, averaging 33 points and 10.5 rebounds.

Jokic had 36 points in Denver's series-clinching 125-115 victory over sixth-seeded Portland on Thursday night. The Nuggets trailed by 14 points in the third quarter but rallied down the stretch, outscoring Portland 28-14 in the final period.

Porter came on late in the series, with 26 points in each of the last two games. Monte Morris was key of the bench, with 22 points and nine assists in Game 6, after finishing with 28 in Game 5. And Aaron Gordon, acquired from Orlando in a trade at the deadline, hit a corner 3-pointer that all but sealed Thursday's win.

Game 1 against the Suns is set for Monday in Phoenix. The second-seeded Suns won their first playoff series since 2010, eliminating the defending NBA champion Los Angeles Lakers with a 113-100 victory in Game 6 on Thursday night.

Porter says the Nuggets are up to the challenge.

“We’ve just got a lot of dudes that are capable, Porter said, "really capable,” he said.