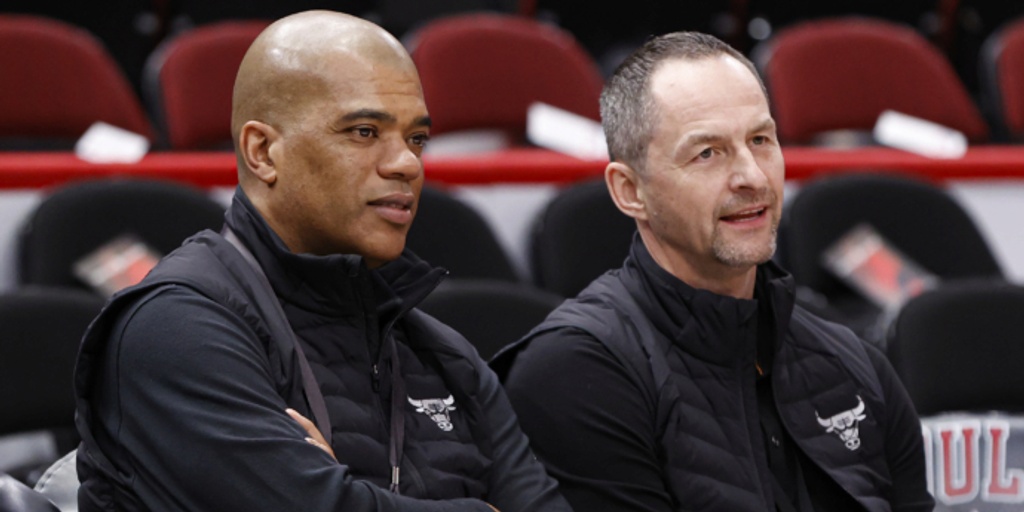 Bulls remain hopeful LaVine will choose to remain in Chicago

The Chicago Bulls remain hopeful All-Star guard Zach LaVine will choose to re-sign with them rather than join another team as an unrestricted free agent.

Executive vice president Arturas Karnisovas has been consistent in saying publicly the organization wants to keep LaVine. And he did it again on Monday.

"We hope Zach is here for a long time, and nothing changed,” Karnisovas said at a news conference to introduce first-round draft pick Dalen Terry.

LaVine’s situation is obviously the biggest story hovering over the Bulls, with the free-agent negotiating period opening Thursday evening.

Karnisovas wants to keep intact a core that helped Chicago reach the playoffs for the first time in five years.

LaVine averaged 24.4 points and made his second straight All-Star team last year. It ended with his first trip to the playoffs in his eighth year as a pro. The Bulls lost in the first round to Milwaukee in five games.

LaVine’s four-year, $78 million contract is up and he said after the season that he plans to explore the market as an unrestricted free agent for the first time in his career after five years in Chicago. He did not rule out returning to the Bulls, who can offer a max contract worth about $212 million. The most he can get from another team is approximately $157 million over four years.

How comfortable the Bulls are about offering a five-year deal is another question. Karnisovas played it coy when asked.

“I'm confident. I'm confident in approaching this free agency the next couple days, sitting down with our group, looking at a lot of things,” he said.

The past season wasn't exactly an easy one for LaVine. He dealt with a thumb injury early and was in and out of the lineup the final few months because of a left knee injury.

LaVine had platelet-rich plasma therapy, a cortisone injection and fluid drained from his knee in Los Angeles before the All-Star break. He had arthroscopic surgery on it last month.

The Bulls went 46-36 and made the playoffs for the first time since 2017 following a major makeover, with DeMar DeRozan and LaVine leading the way. Chicago got off to a big start and finished with its best record since the 2014-15 team went 50-32 in former coach Tom Thibodeau’s final season.

The Bulls also went from leading the Eastern Conference to finishing sixth, losing 15 of their final 22 regular-season games. They dealt with a long list of injuries, making it tough for them to develop continuity and compete with the best teams.

“This group has been here only since October,” Karnisovas said. “We're still trying to get used to how to play with each other.”