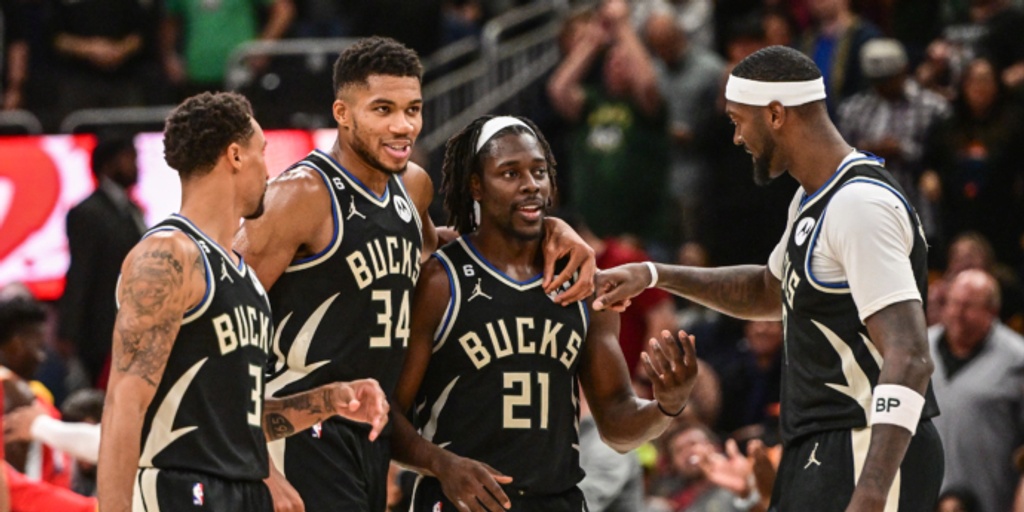 MILWAUKEE (AP) — Giannis Antetokounmpo and Jrue Holiday each scored 34 points as the Milwaukee Bucks responded after falling behind in the fourth quarter to beat the Atlanta Hawks 123-115 on Saturday night and remain unbeaten.

Antetokounmpo scored 30 of his 34 points after halftime and also had 17 rebounds. Holiday also had 12 assists as the Bucks withstood Trae Young’s 42-point effort and improved to 5-0.

The Hawks trailed 118-115 after calling a timeout with 23.2 seconds left, but DeAndre Hunter was called for an offensive foul on Wesley Matthews before Atlanta could throw the ball inbounds.

Milwaukee sealed the win from there, with Antetokounmpo delivering the emphatic punctuation by dunking in the closing seconds after Holiday stole the ball from Young.

Antetokounmpo has scored 151 points over his last four games, which represents the highest output he's had for any four-game stretch in his career.

Brook Lopez had 21 points and Jordan Nwora 11 for the Bucks.

Dejounte Murray scored 21, Hunter 14 and Clint Capela 11 for the Hawks.

The Hawks trailed by 10 with less than 10 minutes left but rallied to tie the game at 104-all on Young’s 10-footer with 4:36 remaining the first time Milwaukee hadn’t led since about seven minutes remained in the fourth quarter.

After Antetokounmpo responded by driving the lane and throwing down a left-handed dunk, Young sank a 3-pointer from over 30 feet away with 4:09 remaining, giving the Hawks their first lead since the opening period.

Antetokounmpo answered with another dunk that put the Bucks back ahead for good with 3:56 remaining.

Atlanta had the ball while trailing 112-111 on two separate possessions in the final two minutes, but Young missed both times, including once from 3-point range. Antetokounmpo dunked in a putback on Bobby Portis’ missed 3-point attempt to make it 114-111 with 1:15 left.

The Hawks didn’t go away.

Antetokounmpo’s jumper off the glass was sandwiched between baskets from Dejounte Murray and Young. The Young basket cut Milwaukee’s lead to 116-115 with 42.2 seconds left.

But the Bucks scored the game’s final seven points to survive. Holiday drove the lane and scored to make it 118-115 with 23.2 seconds remaining.

Hawks: Atlanta had a 53-19 edge over Detroit in bench scoring in a Friday victory over the Pistons but couldn’t get the same type of production from its reserves Saturday. Milwaukee’s reserves outscored Atlanta’s bench 30-23. … Justin Holiday’s 10 points were a season high. Justin Holiday is Jrue’s older brother. Justin’s younger brother is Atlanta’s Aaron Holiday who scored three points in 24 minutes.

Bucks: After shooting a combined 1 of 11 from 3-point range in victories over Brooklyn and New York this week, Lopez was 5 of 8 from beyond the arc Saturday. He made his first five attempts and had 19 points in the first 19 minutes. … Rookie first-round pick MarJon Beauchamp entered the game at the start of the second quarter and played a total of seven minutes.