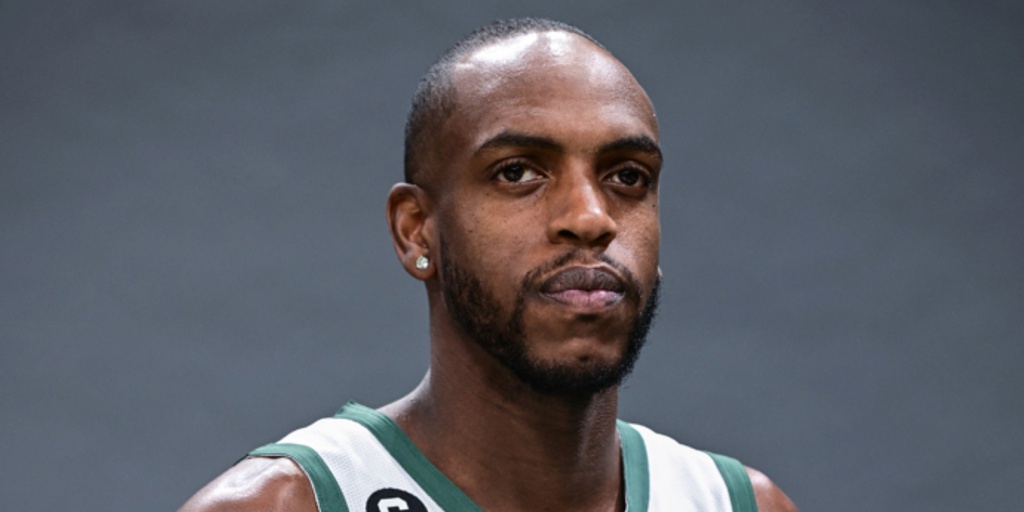 Bucks' Khris Middleton likely to miss beginning of the season

MILWAUKEE (AP) — Milwaukee Bucks forward Khris Middleton probably won’t be available for the beginning of the season after undergoing surgery on his left wrist this summer.

“Hopefully soon after that.” the three-time All-Star said Sunday at the Bucks’ Media Day event.

Middleton said he played through the wrist injury late last season before undergoing surgery. He was wearing a cast for much of the offseason before having it removed two weeks ago.

“Sometime around after the All-Star break, I just felt it during one game and it kind of just never went away,” Middleton said. “It wasn’t too painful, just something that was going to have to be fixed at some point.”

The injury isn’t related to the issue that ended Middleton’s 2021-22 playoff run early.

Middleton sprained the medial collateral ligament in his left knee during Game 2 of the Bucks’ first-round playoff series with the Chicago Bulls and didn’t play again, missing the entire Eastern Conference semifinal that Milwaukee lost in seven games to the Boston Celtics.

The loss to Boston ended Milwaukee’s bid for a second straight title and has provided plenty of motivation as the Bucks prepare for the upcoming season.

When he was asked Sunday about his reaction to people calling him the best player in the world, two-time MVP Giannis Antetokounmpo said that title should go to Stephen Curry, who led the Golden State Warriors to the most recent championship.

The Bucks return with virtually the same roster they had last year. That roster doesn’t currently include restricted free agent Jordan Nwora, but general manager Jon Horst said Sunday that “Jordan’s going to be with us” while adding that the Bucks are still working out final details with the 2020 second-round draft pick from Louisville.

The only players on Milwaukee’s training camp roster who weren’t part of the team at some point last season are rookies MarJon Beauchamp and AJ Green, Marques Bolden and veteran free-agent acquisition Joe Ingles.

Ingles won’t be ready for the start of the season as he r ecovers from a torn anterior cruciate ligament in his right knee. Ingles played 45 games in the 2021-22 season before hurting the knee in late January, knocking him out for the rest of that season.

Horst said Ingles could return as early as December but more realistically would make his Bucks' debut in January.

“I’m very confident, but it’s just a bit of a process at the moment of seeing how it goes,” Ingles said.

One player who’s feeling better after an injury-riddled 2021-22 season is reserve guard George Hill, who dealt with neck and abdominal issues that limited him to 54 games. The 36-year-old Hill said he considered retirement but didn’t want to end his career with that kind of season.

“I felt like I let the city of Milwaukee down last year not being able to perform the way I normally perform,” Hill said. “I let my teammates down, being injured. And I thought about (retiring), but as a competitor, I didn’t want to go out like that.”

Bucks coach Mike Budenholzer had replacement surgery on his right ankle 4 ½-5 ½ weeks ago and had a scooter next to him as he sat and spoke to reporters. He wasn’t sure how the injury might impact him as the Bucks begin their preseason schedule Saturday against the Memphis Grizzlies before heading to Abu Dhabi for exhibition games with the Atlanta Hawks on Oct. 6 and Oct. 8.