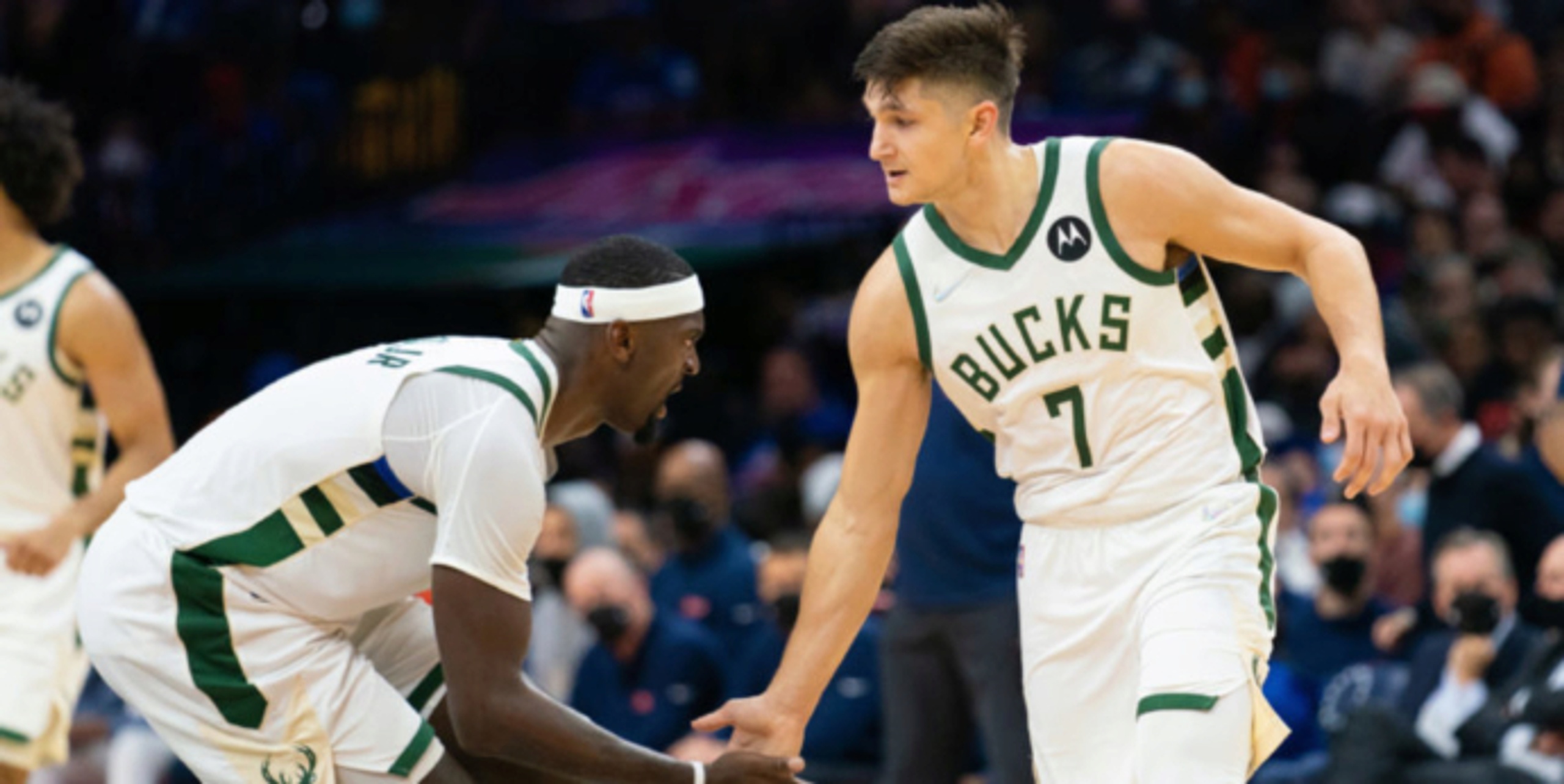 PHILADELPHIA (AP) — Giannis Antetokounmpo had 31 points and 16 rebounds, Grayson Allen scored 25 points and hit a key 3-pointer late in the fourth quarter, and the Milwaukee Bucks held off the short-handed Philadelphia 76ers 118-109 on Tuesday night.

Bobby Portis added 19 points for the NBA champions, who played a day after celebrating the franchise’s first title in 50 years with a trip to visit President Joe Biden at the White House. The Bucks won for just the second time in the last seven.

Tyrese Maxey scored 31 points for the 76ers, who played without four-time All-Star Joel Embiid for the second straight game. Embiid was one of four 76ers out due to the NBA’s health and safety protocols, along with Tobias Harris, Matisse Thybulle and Isaiah Joe.

But the 76ers left the court in defeat to applause from the normally demanding home crowd, which recognized the strong effort put forth by a Philadelphia team that started Shake Milton, Maxey, Furkan Korkmaz, Paul Reed and Andre Drummond.

The Bucks pushed their advantage to eight early in the third on George Hill’s follow shot, but Philadelphia didn’t wilt. The 76ers went ahead 90-89 on Green’s 3-pointer with 1:49 left in the third and finished the period in front 93-91 thanks to Drummond’s tip of Maxey’s miss with 1.5 ticks remaining.

Drummond had 17 points and 20 rebounds. Milton scored 20 points and Georges Niang chipped in 21.

Bucks coach Mike Budenholzer talked before the game about how much he enjoyed the Bucks’ visit to the White House.

“It’s an honor, special,” he said. “It’s just a great day for the organization, our players. Just a very historical place. You can feel it when you’re in the building and when you’re in the presence of President Biden. (Biden was) very, very kind and generous with us. It’s a day all of us will remember. Just feel very honored to have been invited.”

Bucks: Khris Middleton (health and safety protocols) missed his fifth straight contest. … Brook Lopez (back soreness) hasn’t played since the season opener and Budenholzer didn’t have an update when asked about Lopez prior to the contest. … Donte DiVincenzo (left ankle recovery) hasn’t played this season.

76ers: Harris missed his sixth straight contest, but Rivers said before the game that his health is improving. “Tobias is doing a lot better,” Rivers said. “We’ll say he’ll be back sooner than later.” … Thybulle sat for the third straight game and Joe missed his fourth in a row. Rivers wasn’t as optimistic about their imminent return.

Bucks: Improved to 1-1 on season-high, five-game road trip. … Won their sixth in a row against Philadelphia.

76ers: Reed brought the home fans to their feet with an emphatic block of Antetokounmpo with 4:03 left in the second quarter. … Maxey had 17 points in the first quarter, making 7 of 9 shots and 3 of 4 from beyond the arc. … … Hall of Famer and 76ers great Julius “Dr. J” Erving was in attendance.

Bucks: At Knicks on Wednesday night.