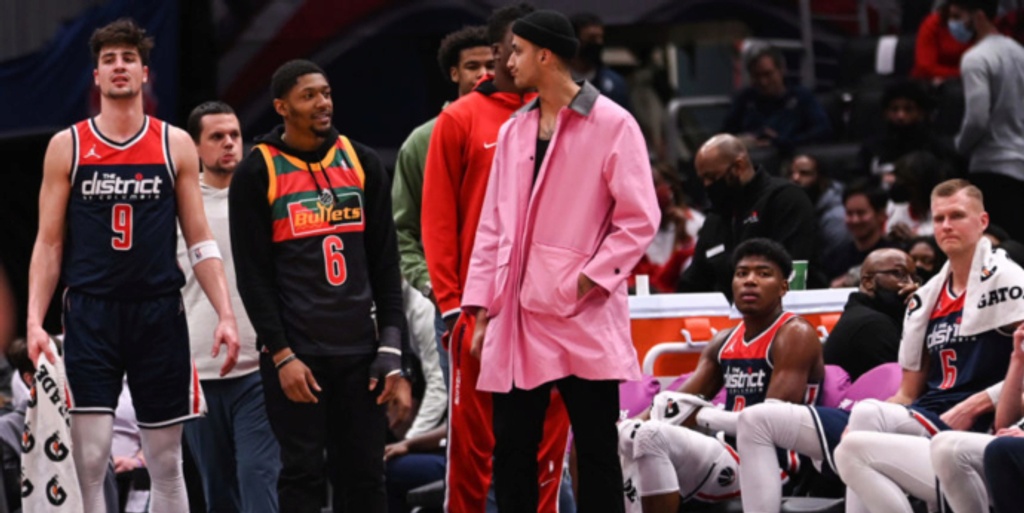 All eyes on Bradley Beal as big offseason begins for Wizards

A few weeks after the surgery that ultimately ended his season, Bradley Beal was talking with reporters when he was asked a simple question: Was it fair to say he was leaning toward re-signing with Washington?

“It's fair,” Beal said in early March, without offering any more assurance than that.

Now the Wizards embark on a massive offseason, and all eyes are on Beal, who can become a free agent this summer. His next move will obviously have a big impact on the franchise's direction.

Beal had surgery in February on his left wrist and didn't play again. A Washington team that started fast under new coach Wes Unseld Jr. ended up going 35-47 and missing the playoffs.

Washington began the season by winning 10 of its first 13 games. The trade that sent Russell Westbrook to the Los Angeles Lakers was paying dividends, with Kyle Kuzma, Kentavious Caldwell-Pope and Montrezl Harrell all contributing after coming to Washington in that deal.

By the time Beal went down, however, the Wizards were already slipping. That injury certainly didn't help their prospects, and they ended up making more significant moves at the deadline. Spencer Dinwiddie, who was acquired to play point guard before the season, was dealt to Dallas in a deal that brought Kristaps Porzingis to Washington. The Wizards also traded Harrell.

The 7-foot-3 Porzingis played well for Washington, averaging 22.1 points in 17 games for the Wizards. He never got to play alongside Beal, and the question now is whether he'll have that chance next season.

“Slowly, we're kind of figuring each other out, especially my teammates with me, because I just got here," Porzingis said late this season. “I think we're still pretty far away from where we want to be, in terms of chemistry and stuff like that, but it's not bad for this short a period of time. It's pretty good. I'm excited to see what's ahead of us.”

The point guard spot has often been a strength for Washington, with Westbrook, John Wall and Gilbert Arenas having occupied it. Dinwiddie had big shoes to fill when he arrived, and his tenure with the Wizards didn't last long. Now Washington needs to find another solution.

The Wizards remain a work in progress on defense after Unseld's first season. They finished 25th in the league in defensive rating.

“We had to change how we defended certain things, pretty much in the middle of the season," Unseld said. "A bit of a hiccup, but that's what we had. So we had to adjust things a little bit, and it took a little time to get back on track in that area.”

Washington ranked last in the NBA in steals.

The Wizards also finished last in the league in made 3-pointers, but in this area, their defense did succeed. No team held opponents to fewer 3-point attempts than Washington, and only two teams allowed fewer made 3s.

Kuzma averaged 17.1 points, his highest average since his second season with the Lakers in 2018-19. Caldwell-Pope averaged 13.2 points.

Daniel Gafford averaged a career-high 9.4 points per game on 69% shooting from the field. The 23-year-old Gafford doesn't have the height of Porzingis, but his athleticism could be an asset for the Wizards in the seasons to come.

“I think overall, he's shown growth in a lot of areas. He still has a lot of untapped potential, in my opinion,” Unseld said. “He's very impressionable. I think at times, his confidence wanes, but that's all young players.”