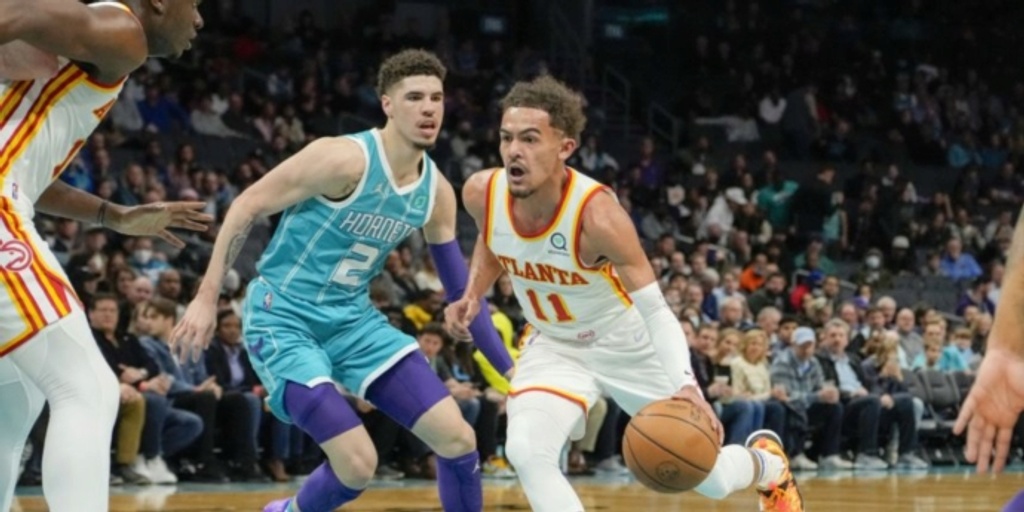 The Atlanta Hawks never expected to be in this position.

Not after last summer's surprising run to the Eastern Conference final.

But here they are, needing to win two play-in games just to make the playoffs.

First up: the Charlotte Hornets on Wednesday night in a matchup between the ninth and 10th seeds in the East.

“Our destiny is in our hands," Hawks center Clint Capela said.

Atlanta was one of the biggest surprises of the 2021 postseason, knocking off both the Knicks and the top-seeded 76ers before losing to the eventual champion Milwaukee Bucks in a highly competitive conference final.

With a young core led by Trae Young, the Hawks set a goal of finishing in the top four in the East this season. Instead, after a year plagued by COVID issues, injuries and a strange lack of chemistry, they had to settle for the next-to-last play-in spot.

“We have to live in the moment,” coach Nate McMillan said. “We can't think about all of that. We have a game we have to win."

The Hornets are in the play-in tournament for the second year in a row. While they haven't made the playoffs since 2016, they appear to be a franchise on the rise.

“We feel like we can definitely win and sneak into the playoffs,” guard Terry Rozier said.

The winner of the 9-10 game advances to a road contest Friday against the Cleveland Cavaliers.

“We've still got a chance to make the playoffs,” Young said. “We've got to take advantage of it.”

The Hawks have been without one of their top players, John Collins, since March 11 because of a sprained foot and an injured finger.

Collins has stepped up his rehab in recent days, including some 4-on-4 workouts.

Coach Nate McMillan said he's not sure if Collins will be able to play limited minutes against the Hornets, but the Hawks are preparing to go without him.

“He's been out for so long," McMillan said. "The focus is on the guys that we do have in uniform. If we're lucky enough to get him back, we'll talk about that and adjust to that.”

The Hornets had 10 more victories than a year ago in the abbreviated 72-game schedule, but they still finished 10th in the East for the second straight season.

In the 2021 play-in game, Charlotte was routed 144-117 by ninth-seeded Indiana. Several Hornets players have talked about the sting of that loss providing momentum coming into this season.

Charlotte is healthier and playing much better than it was a year ago. The Hornets won 11 of their last 15 games.

“Most years we would be the seven or the eight seed — most years — but this year the East was more competitive," Hornets coach James Borrego said. “I am really proud of this group.”

Led by guards LaMelo Ball and Rozier, the Hornets ranked fourth in the league in scoring (115.3 points per game) and have been especially effective when going with a small lineup.

Charlotte can really get out and run when 6-foot-7 P.J. Washington and 6-6 Miles Bridges are playing the center and power forward positions.

“They play small and they play fast,” said McMillan, whose own team ranked sixth in the league in scoring (113.9). “They are a team that wants to get out in transition."

Young had a historic season, becoming only the second player in NBA history after Tiny Archibald to lead the league in both total points (2,155) and assists (737).

The Hornets had good success against Young in their final regular-season matchup, using a wave of double teams to hold him to a season-low 9 points on 3-of-12 shooting.

Young did manage to dish out 15 assists in that game.

“We can’t let him breath,” Rozier said. “He’s a pretty confident player, but we just have to make it tough for him.”

The Hawks claimed the No. 9 seed on a tiebreaker with the Hornets, which is why this game is being played in Atlanta.

“Whenever we play at home, we are much more confident, the energy is better, the focus is better,” Capela said. “To get that first game at home, it's a huge advantage for us.”