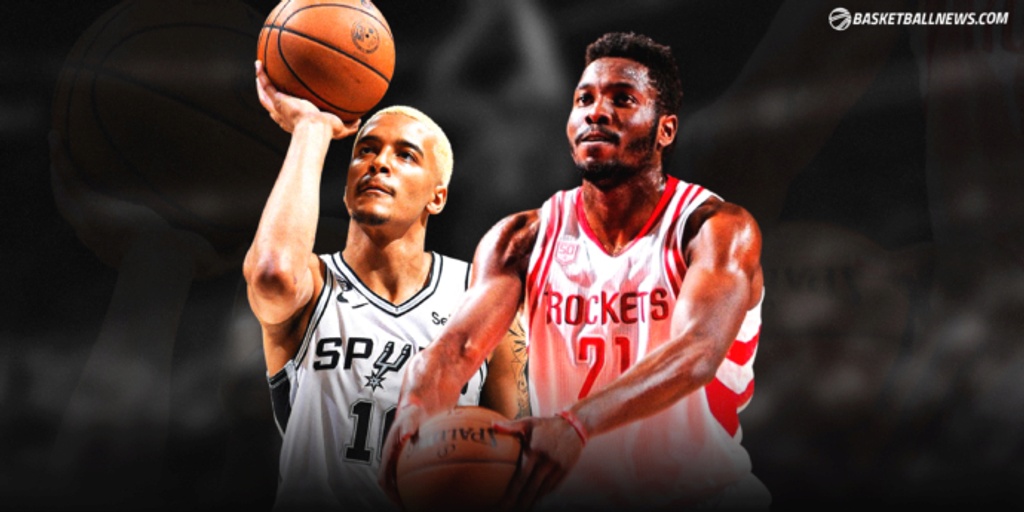 Will one-handed or underhand free throws ever catch on in the NBA?

Over the last month, San Antonio Spurs rookie Jeremy Sochan has turned heads by switching his free-throw approach. He abandoned his traditional form, opting to shoot one-handed instead.

Early in the season, Sochan was one of the worst free-throw shooters in the NBA, making just 45.8% of his attempts. Spurs head coach Gregg Popovich and assistant Brett Brown pitched the one-handed idea to Sochan during a shootaround in late December, and he’s been shooting that way ever since.

Since making the switch on Dec. 19, Sochan has shot 77.2% from the line. And he’s clearly getting more comfortable shooting one-handed; over his last 16 games, he's shooting 83.3% from the charity stripe.

Given how well this experiment has worked, could we see more players try the one-handed approach going forward? It’s possible.

Sochan deserves credit for being open-minded and making this switch. Over the years, there are plenty of examples of players who have balked at the idea of adopting an unconventional free-throw routine out of fear of looking foolish.

Jeremy Sochan is shooting one-handed free throws after he has struggled at the line this season.

For example, Rick Barry has offered to teach players his famous underhand foul shot on numerous occasions, but nobody has been willing to take him up on it.

While we have seen players tweak their shooting motion or switch from shooting left-handed to right-handed (like Tristan Thompson), players don't seem willing to try the underhand (or "granny style") shot.

“I told Rick Barry I’d rather shoot 0% than shoot underhand. I'm too cool for that,” Shaquille O’Neal famously said. In his biography, Shaq explained that his father told him “that’s a shot for sissies.”

Wilt Chamberlain, who famously struggled from the charity stripe, briefly switched to shooting underhand during the 1961-62 season and saw his free-throw percentage jump from 50.4% to 61%. However, he abandoned the approach, explaining in his biography that it made him "look silly" and "like a sissy." Over the final 11 years of his NBA career, he shot 48.7% from the free-throw line.

Back in 2016, Rockets center Chinanu Onuaku used the underhand shot during his brief stint in Houston. After making the switch in college, his free-throw percentage increased by 13% the following season. While his NBA career was short-lived (only appearing in six games), he never missed a free throw across his two seasons with Houston – shooting a perfect 4-for-4 from the free-throw line.

Nowadays, the only player who’s carrying on the underhand form is Barry’s youngest son, Canyon Barry, who plays for the Iowa Wolves in the NBA G League. Barry's other sons – Brent, Jon, Drew and Scooter – all shot free throws traditionally. But Canyon has had success with the underhand shot.

"It's just a matter of the 10,000-hour rule in repetitions and getting the feel and building that technique, and that's part of the reason that the underhand free throw is such a successful shot again," Canyon said. "It's backed by science...

"You have to have your wrist, elbow and shoulder moving in unison every time you do an overhand shot versus the underhand shot that's just your shoulder joint. So it's a lot more repeatable and you can build that muscle memory faster because you really only need to focus on the memory at one joint versus having three working in unison."

Canyon switched to shooting underhand before his junior year of high school and it worked, especially as he got more comfortable with the form. As a senior with the Florida Gators, he shot 88.3% from the free-throw line. During his four years in the G League, he’s shooting 84.8% from the charity stripe. And during the 2020-21 campaign, he shot a perfect 100% at the line.

"It's one of those things where I'm pretty much the only person that does it now, and I would hate to see it die when I stop playing because it's such a good and reliable shot," Canyon said.

Rick and Canyon are shocked that more players aren't willing to try the underhand approach.

"I really truly can't comprehend the aversion people have to trying something that could be very effective for them," Rick said.

"Logically dictated, if you have one of the greatest free throw shooters of all-time as your personal free throw coach, you should at least give it a try," Canyon said.

Interestingly, Brent Barry is now an executive in the Spurs' front office, serving as their vice president of basketball operations. Perhaps Sochan’s success with the one-handed shot will lead to more unconventional free-throw forms popping up around the NBA.