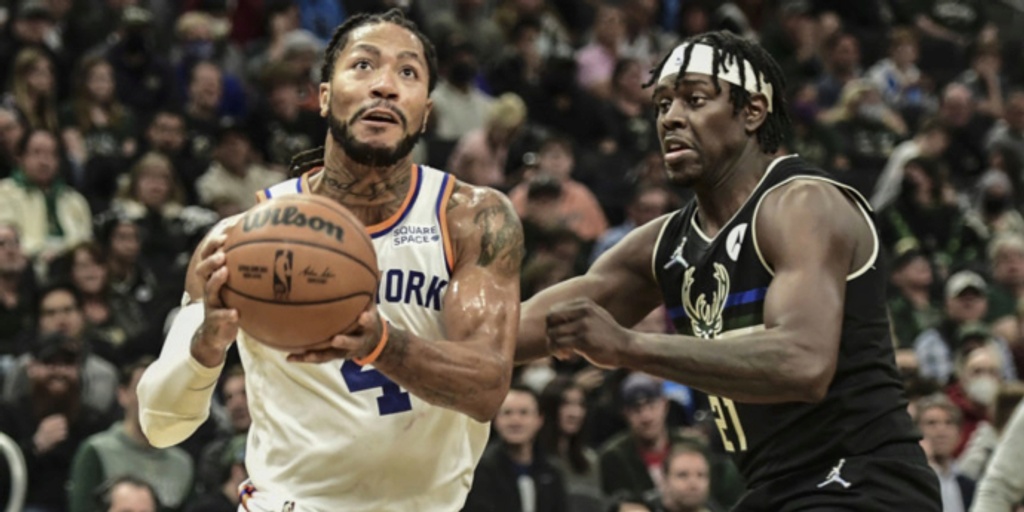 Is Friday's big win vs. the Bucks an inflection point for the Knicks?

The NBA season is an arduous marathon that stretches out over 82 games and more than six months. Thus, it's unwise to put too much stock into one of the first ten contests of the year.

Nonetheless, some games end up meaning more than others, even if they take place in early November. Friday night's matchup with the defending champs in Milwaukee felt like such a game for the Knicks.

New York entered the evening riding a two-game losing streak after being badly beaten by the Pacers and Raptors earlier in the week. Prior to taking on Giannis Antetokounmpo and the mighty Bucks, coach Tom Thibodeau discussed how important it was for New York to get off to a solid start. However, Milwaukee jumped out to a massive lead early on, knocking down uncontested three-pointers from all over the court. Ten minutes into the game, Bucks' shooting guard Grayson Allen (14 points) had outscored the Knicks (13 points) by himself. When the first quarter ended, the Knicks slinked back to their bench with their shoulders slumped, down 21 points (38-17).

However, that's when Derrick Rose, playing just an hour away from his hometown of Chicago, sparked a furious comeback. On the Bucks' first offensive possession of the second quarter, Rose, who was extremely active on the defensive end all night, stole the ball from Pat Connaughton. Rose floated in a bucket from five feet two minutes later, followed by another runner in the paint and a driving layup. On the next possession, the point guard found Mitchell Robinson underneath for a dunk. The Knicks had life. They would slice the lead down to six near the end of the first half.

Feeding off Rose's energy on both sides of the ball, along with the boost provided by Julius Randle playing like the All-NBA version of himself, the Knicks continued to chip away at the Bucks' advantage until they seized the lead with less than two minutes remaining in the third quarter.

Once New York grabbed the lead, they never looked back. With three minutes left in the contest, the Knicks had built a 20-point lead of their own. The key to their second-half domination was ratcheting up their defensive intensity. In the first quarter, the Knicks allowed 38 points, as they watched the Bucks shoot 13-of-26 from the floor. In contrast, in the third and fourth quarters combined, the Knicks allowed just 35 points, limiting the Bucks to 11-of-33 shooting.

It marked the first time in franchise history that the Knicks overcame a 20-point deficit to record a double-digit victory since the NBA began tracking play-by-play in boxscores during the 1997-98 season.

Again, you don't want to place too much importance on a regular-season game played less than a week after Halloween, but there are certain inflection points in every NBA season.

At the end of the first quarter Friday night, the Knicks had been outscored by a whopping 49 points over their previous seven quarters, dating back to the start of the second half vs. Toronto. The tension was palpable among the always calm contingent of fans on #KnicksTwitter, with folks calling for Julius Randle to be shipped out of town and pleading for Thibs to make wholesale rotation changes.

By the end of the evening, the temperature had been turned down considerably. Speaking with reporters afterward, you could sense the pride and renewed confidence among many of the players.

"It says a lot about the character of our team," said Julius Randle, who outplayed Giannis and stuffed the stat sheet with 32 points (11-of-22 FGs), 12 rebounds, four assists, two blocks and three made three-pointers. "NBA games are long. What's special about our team is we fight. We have a lot of high-character guys."

Ask coaches and players, and they'll tell you the same: Good, contending NBA teams avoid lengthy losing streaks. That's what was at stake Friday night against the Bucks. (As an aside, one of the most remarkable stats in recent NBA history was during the decade of the 1990s, Michael Jordan's Bulls - excluding his retirement and half-season comeback - never lost three games in a row. Yes, in over 626 combined regular-season and playoff games, Chicago never lost three consecutive contests with MJ in uniform.)

"We needed that one," said RJ Barrett. "We found our defense. We kept going, kept pushing."

It will be interesting to see if the Knicks can build some positive momentum from this statement victory. They have a winnable game against the Cavs at home on Sunday before traveling to Philadelphia on Monday to take on the Sixers, who boast a conference-best 7-2 record. New York then hosts the Bucks on Wednesday, with Giannis Antetokounmpo and his troops undoubtedly looking for revenge.

- Incredibly, in the 30 minutes Derrick Rose was on the floor Friday night, the Knicks outscored the Bucks by 31 points.

- On the season, Rose has posted an extraordinary cumulative plus/minus of +95 in his 198 minutes. That's the highest net rating in the NBA this season. Utah's Donovan Mitchell is the only other player in the league with a +/- higher than +79.

- Barrett has tallied at least 20 points, five boards and multiple three-pointers in each of the Knicks' previous four games. At just 21 years of age, he's the youngest player in Knicks franchise history with such a streak.