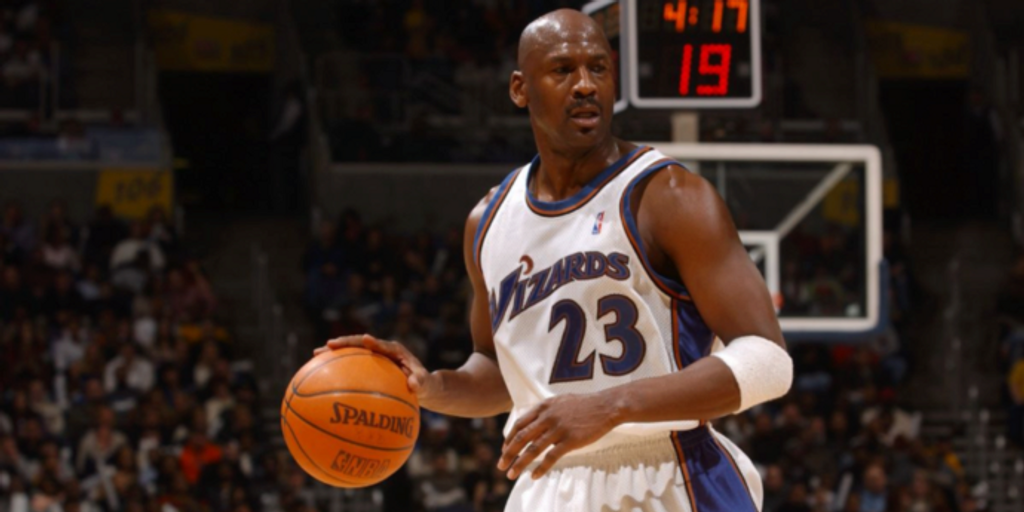 Did you know Michael Jordan was an MVP candidate with the Wizards?

The 2001-02 NBA season was Michael Jordan’s first with the Washington Wizards, a time when he decided to unretire and return to the league for the second time in his career.

Some would have you believe that MJ’s Wizard years “diminished his legacy," while others feel that he was still the best shooting guard in the league. Wherever he actually stood, Jordan was clearly still exceptional given his age, production and general persistence.

In that '01-02 campaign, there were plenty glimmers of “old” Jordan — as well as old Jordan, who turned 39 that February — but were they enough to make him a Most Valuable Player candidate at one point? It was at least discussed.

Around this time 20 years ago, Jordan had just returned from a chronic knee injury that had reportedly been bothering him throughout the season. He even came off the bench upon being reinserted to the lineup for the final seven games of the season, and he scored more than 14 points just one time. But before missing 12 games of action between Feb. 27 and March 18, Jordan’s comeback season had been a successful one.

When Jordan went down, the Wizards were 27-27 and in the playoff chase, tied for seventh in the Eastern Conference with Allen Iverson’s Philadelphia 76ers and Baron Davis’ Charlotte Hornets. Washington was also just three games behind Paul Pierce, Antoine Walker and the Boston Celtics, who were sitting in fourth. Jordan had been averaging 24.3 points, 6.0 rebounds, 5.4 assists and 1.5 steals per game on 41.9% shooting from the field and 78.8% from the free-throw line at the time of his injury, which forced an extended absence.

(Just days before the setback, the Wizards were 27-23 and fifth in the East, and that was about three months following a 2-9 start to the season).

There's at least one notable story regarding Jordan’s MVP candidacy that you can still find on the internet. Here's an excerpt of an article written by Mike Wise in the New York Times on Jan. 13, 2002, for example.

Who else besides Jason Kidd, Kobe Bryant, Shaquille O'Neal, Tim Duncan and Kevin Garnett has been more important to his team? O'Neal and Chris Webber have been injured, and neither Tracy McGrady nor Vince Carter has elevated his team to the top of the Eastern Conference. Allen Iverson, the reigning MVP, is muddling through a disappointing season in Philadelphia.

By that point in the season, the Wizards were 18-16 and on track to not just make the playoffs, but also match the 19-win mark that the team recorded the previous season that same week. (That's how D.C. ended up with 2001 No. 1 overall pick Kwame Brown).

Just two weeks earlier, Jordan dropped 51 points against the Hornets and 45 points (plus 10 rebounds and 7 assists) against the first-place (and soon-to-be East champion) New Jersey Nets in consecutive blowout victories. Those were his two highest-scoring totals of the season — though he did have back-to-back 40-point games in late January in wins over the Cleveland Cavaliers and Phoenix Suns.

More importantly, that two-game, 96-point outburst against the Hornets and Nets stemmed from an uncharacteristic 6-point effort against the Indiana Pacers just days earlier. It's a time that our own Etan Thomas, then a rookie teammate of MJ's on the Wizards, specifically recalls.

“I remember the media was ripping him to shreds,” Thomas said. “After that, they were like, 'He’s too old, he shouldn’t have come back, he’s tarnishing his legacy,' yadda, yadda, yadda. So I remember going into the locker room, and he was sitting in this chair reading the papers. I remember seeing him rockin’ and, like, humming and biting his lip, and he was like, 'Uh huh.' So I guess he was just reading it over and over again. He was very intense.”

On the 51-point eruption in particular, Thomas highlighted: “In that game, it was like magic. It was electrifying, like every move, and he was on fire!”

"Every player reaches a point in their career where their game starts to decline. Some earlier than others. Look at Michael. He's 38. He's not averaging 30-something points a game like he used to. He's in the low 20's now. Is he still effective? Yeah, he's very effective. Is he the old Michael? Hell no. Far from it, even with those 50-point games now and then.

"I played against the old Michael. I've seen him at that level. But he's made the adjustment. He's learned to cope with his body playing at a certain level and not expecting to play at the old level. He's raised his game in other areas."

Thomas, though, explains that people didn’t realize the severity of Jordan's ongoing ailments. Beyond nearing 40 years old, MJ was simply overcoming more than the public knew.

“This is the part that people don’t understand: how injured he was. I saw it firsthand,” Thomas said. “Somehow it leaked that he was getting his knee drained, and I was sitting there like, ‘I see him do that every other day!’ Literally, his knee would swell up like the Elephant Man! I was sitting in the training room getting some treatment or whatever, and he was on the table next to me. I saw it! They came in, and they pulled out this needle and drained his knee. They drained it and this black-tar goo stuff came out and he was in excruciating pain and it looked terrible!

“I asked him, ‘Why are you even doing this?’ He didn’t need to prove anything to anybody. And when I said it, the whole training room got quiet, and he just looked at me and kinda shook his head. He didn’t give me an answer, he just kinda shook his head and shrugged his shoulders. He was really in pain, he just didn’t tell nobody.”

In the NYT piece, Sacramento Kings general manager Geoff Petrie — who won NBA Executive of the Year in both 1999 and 2001 — said Jordan had a shot at MVP, albeit a fringe one, saying he’d vote for Shaquille O’Neal and Kobe Bryant instead, who then had the Lakers at 26-8.

"I'd say Shaq and Kobe, who are almost indistinguishable because both are so good. Then [Jason] Kidd, [Tim] Duncan and maybe [Kevin] Garnett. But if the Wizards keep going the way they are, Michael would have to have a shot.

"There is another reservoir of talent there with [Jordan]. He's so driven. I was reading something Grant Hill said recently, about the fact that it's so easy to get caught up in Jordan's athleticism. The level of athleticism has dropped, but the skill level is so high."

Thomas adds that, while Jordan was nearing 40, you’d still often get those glimpses of his true game in practices — and his competitiveness on a daily basis.

“You saw the flashes of him being MJ MJ,” Thomas assured. “But his game was different, so now, it wasn’t that explosive game that you’re seeing on all the highlights with him coming down dunking on everybody. He started working the mid-range. And I saw him torch people with that mid-range. We had that little drop play to 'em — kinda semi-triangle — but he would work off the elbow and he would just be torching cats with it. So his game changed.

“I was there seeing all of that. I was like, 'Man, he’s still MJ!' It was just different. It wasn’t like, 'Oh, come down the lane and dunk on everybody,' it was just killing everybody with the mid-range. It was like he had everybody on a string! He was making these moves and they could not stop him! They kept going for all of the fakes! And these were all top defenders!”

Jordan subsequently finished 13th in MVP voting with 16 voter points. His finished with averages of 22.9 points, 5.7 rebounds, 5.2 assists and 1.4 steals per game on 41.6% shooting from the field and 79.0% on free throws. He led the team in points, assists and steals per game through 60 appearances.

Tim Duncan wound up winning the MVP that year in a close race over Jason Kidd. Shaquille O’Neal, Tracy McGrady, and Kobe Bryant rounded out the top five.

But when healthy, Jordan was far better than people would have you believe that season.