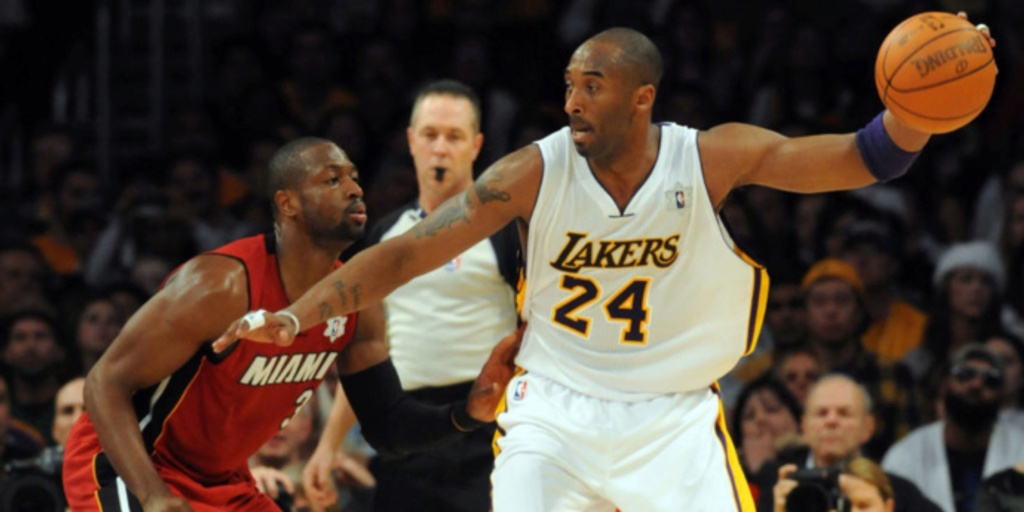 Wade looks back on Kobe’s buzzer-beater over him: 'Luckiest shot ever'

Artest looking, gets it to Bryant.

Bryant dribbling, has to put it up at the buzzer...

BANKS IT IN! HE BANKS IN THE THREE, AND THE LAKERS WIN THE GAME!

To this day, Kobe Bryant's buzzer-beater over Dwyane Wade is one of the most epic clutch moments in recent NBA history. And even though the stakes weren’t high — it was an early December game, just over a month into the season — Kobe’s off-balance three-pointer is one of the most incredible highlights of his all-time great NBA run.

Now, 11 years later, Wade looked back on that moment and remembered what it felt like to lose what seemed like a sure-fire win with 3.2 seconds left on the clock. Instead, Bryant pulled off a miracle, leading the Los Angeles Lakers to a 108-107 victory over the Miami Heat, extending L.A.'s win streak to eight games.

"Luckiest shot ever, Kobe Bryant hitting a game-winner on me," Wade said. "It was such a Kobe moment. I actually couldn’t be that mad because I looked down and said, ‘That’s Kobe.’"

Wade’s comments over a decade later are in line with what he said right after the game 11 years ago.

“If you told me before the game that it would be decided by Kobe shooting a one-legged backboard three, I’d have taken that,” Wade said. “The basketball gods were with him on that one, but we did a great job and did what we’re supposed to do on the road — give ourselves a chance to win. But a great player hit an unbelievable shot.“

Kobe, however, refused to take much credit for it. Despite it being his 35th point of the night — plus, the fact that Bryant was without a doubt the best tough-shot maker in the NBA and the only one capable of pulling something like that off — the Lakers superstar kept it real.

“It was the luckiest shot I’ve ever taken, by far,” Bryant said. “It felt good, [but] I just couldn’t believe this ball might go in on this shot.”

Dwyane Wade wasn’t surprised by Kobe’s game-winner over him on this day in 2009. #NBA75 pic.twitter.com/5y2CW1BmLE

It’s been over a decade, and we’ve witnessed many jaw-dropping buzzer beaters since. But a few are as impressive as Kobe’s one-legged three-pointer over the outstretched hand of D-Wade, even with the two Hall-of-Famers calling it lucky.

But the fact of the matter is that we were the lucky ones having witnessed it.