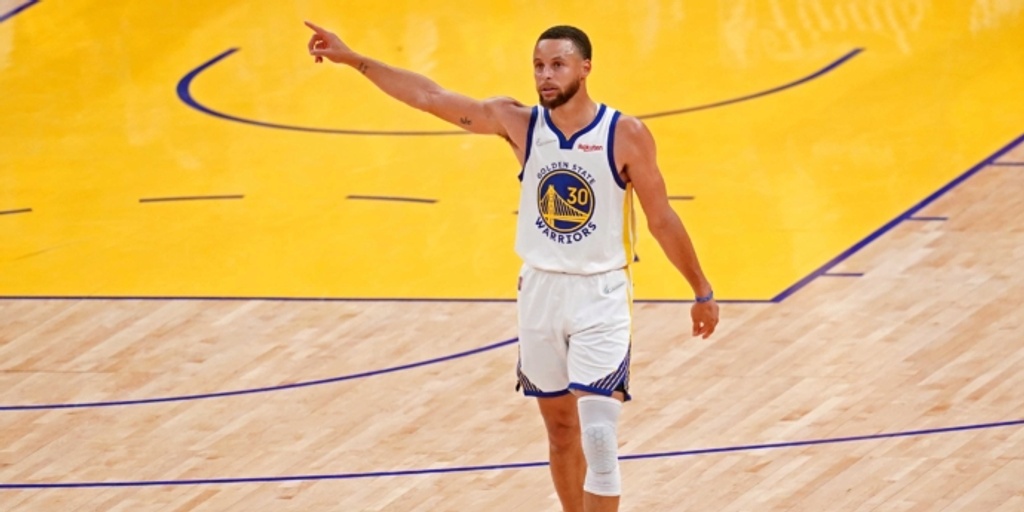 It’s the most wonderful time of the year. The days are long, the nights are warm and the NBA Finals have come back around.

The Finals stage is where legacies are made. The entire season leads up to this series.

But with the good comes the bad; such is the nature of life. For those with allergies, like myself, June also brings about itchy eyes and a runny nose. And for basketball purists, the bad comes in the form of recycled cliche talking points that, at times, dwarf the discourse surrounding the game itself.

The Finals are where we finally find the answers to season-long, and sometimes career-long, questions.

Can Dirk Nowitzki lead a team to a title?

This season is no different.

Today's question du jour: Does Stephen Curry need a Finals MVP and another championship sans Kevin Durant to shore up his legacy as one of the 10 best to ever play the game?

One might think the Golden State Warriors would be impervious to these conversations. After all, they won an NBA championship in 2015, the same year they entered the upper echelon of the league before questions could even emerge. And yet, here we are — eight years, six Finals runs and three titles later — questioning Curry’s greatness and ultimate legacy.

So, what is the answer to that aforementioned question?

First, let’s take a look at Curry’s legacy. In short, he is an all-time great who's responsible for revolutionizing the Three-Point Era.

It is too simple to reduce Curry to just "the greatest shooter of all-time” and limit his skills to only one facet of his game. Because not only is Curry the greatest shooter ever, he is also an elite finisher with both his right and left hand, and he sports one of the best handles we’ll ever see. And yet, despite all of his on-ball skills, he is even deadlier off the ball.

In the words of Warriors president and general manager Bob Myers, who joined The Morning Roast on 95.7 The Game on June 7: “This guy is a made-man. Forget about this Finals; it's already been done. He's already done it. He's already proven it. I don't know what else he has to continue to prove.”

Bob Myers believes Steph Curry has nothing left to prove in the NBA Finals 🐐 pic.twitter.com/JXkLpiRj4b

Myers is correct. Curry has cemented himself as an all-time great.

They all matter when cementing your legacy.

And that’s because, unlike other accolades, championships are not debatable. Being the last team standing is a matter of fact, and not decided on by a select group of media.

Players aren't awarded titles. They win them. Curry’s greatness is shown by reaching this objective season after season. With each new ring, it cements what should never be up for debate.

Finals MVP, however, is a subjective award. And when it comes to subjectivity, Curry’s greatness regularly gets called into question. Being a pioneer in any industry means having your name etched into the history books, but with that comes some bad: you’re ahead of your time. And, as a result, people often can’t keep up with your greatness as it happens.

They were numbers that paled in comparison to LeBron, who finished the series with averages of 35.8 points, 13.3 rebounds and 8.8 assists per contest, leaving many to believe Curry failed in the role of a superstar on the biggest stage.

Dominance in the form of counting stats is easy to quantify, but dominance in creating an ecosystem that benefits those around you — is not. Thus, the true value of Curry is hard to measure.

Many voters point to the tides turning after Game 3. The Cleveland Cavaliers had taken a 2-1 series lead, and the Warriors adjusted by swapping Iguodala in for Andrew Bogut in the starting lineup — a rare move that offered major benefits on both sides of the ball.

At a distance, the case for Iguodala over Curry for Finals MVP is such:

Iguodala guarded the best player in basketball and limited LeBron’s impact to sub-40% shooting, the Warriors never lost a game once he entered the starting lineup, and, as a starter, he averaged 20.3 points, 7.0 rebounds and 4.0 assists per game. He also shot 47.8% from the floor and 40.9% from three, numbers that closely resembled Curry’s with much better efficiency.

Take a closer look, and we can see how that’s all the more reason Curry deserved the Finals MVP. Without taking anything away from Iguodala, who was a valuable piece that allowed the Warriors to unlock this lineup, Steph made it unstoppable.

Introducing Iguodala into the starting lineup in place of Bogut allowed the Warriors to play a five-out lineup with passing.

Curry, being the best shooter ever, gets the most attention, and the way he moves off-ball — constantly in motion and always a threat to shoot — opens the floor up for all of his teammates in ways that are not yet quantifiable. Curry running by two defenders and pulling them towards him is not a screen assist, but it still opens up a driving lane or a shot in a similar way.

With Bogut on the floor, the Cavs could tilt their defense toward Curry without any blowback. With Iguodala’s passing and shooting in Bogut’s place, the Cavaliers' defense was forced to make a choice. More often than not, their decision was to dare Iguodala to shoot, and to his credit, he knocked them down.

Curry’s court vision and decisive actions create excellent opportunities for teammates, as he led the Warriors in assists. Iguodala was the prime beneficiary, accounting for nearly 40% of his points as a starter in catch-and-shoot situations, according to NBA.com. (That includes all of his made field goals in the deciding Game 6.)

Decades from now, when people think back on the Warriors’ first championship, losing Finals MVP to Iguodala won’t be an indictment on Curry and his game, but instead on our ability to appreciate what doesn’t show up in the box score.

It’ll be a capsule in time, defined by our limited scope.

The predicament is similar to the NBA's 2007 Defensive Player of the Year award.

Marcus Camby won the award, given to the best defender in a season, over Tim Duncan, who finished third behind San Antonio Spurs teammate Bruce Bowen.

Despite being one the greatest defensive anchors of all time, Duncan never won the honor — a gaffe on the part of voters and a result of our limited ability to measure defense.

In 2007, after finishing with his second blocks title in what would be a three-year reign, Camby was awarded Defensive Player of the Year instead.

Over time, we’ve come to learn that blocking shots, though flashy and easily quantifiable, is far less a marker of a great defender than one who deters opponents from even attempting a drive.

NBA.com can track how well opponents shot against you in various areas on the court, and despite Camby’s higher blocks-per-game average of 3.3 to Duncan’s 2.4, players shot 8.3% worse when met by Duncan over Camby in the restricted area.

Blocks per game also remains the sole stat that favors Camby over Duncan defensively. The Denver Nuggets even performed better defensively with Camby on the bench.

And though not one of these stats alone is a clear indicator of which player is a better defender, all of them together make it pretty obvious that Duncan was better than Camby in 2007.

Then, there are other factors that can’t be measured, like how often the presence of a defensive force such as Duncan prevents teams from even passing to a guy guarded by the stalwart.

Defensive Player of the Year awards began in 1982-83. Ten of the first 28 winners led the NBA in blocks. Since then, no player who led the league in blocks has gone on to win DPOY. Nowadays, it would be laughable to base a defensive argument on something as basic as blocks.

I think this is how we’ll understand Curry not winning a Finals MVP in his first three chances, namely in 2015. The Finals MVP is supposed to highlight the most valuable player during the most important stretch of basketball all year. That was undeniably him.

The mark of a great offensive player is that teams would prefer to play 4-on-3 versus 1-on-1, and in 2015, Iguodala benefited from being the man open. But that’s entirely thanks to the gravity of Stephen Curry.

Because, at the end of the day, every NBA defense is trying to get the ball out of Steph's hands.

And, in the words of Max Kellerman, they want Iguodala.