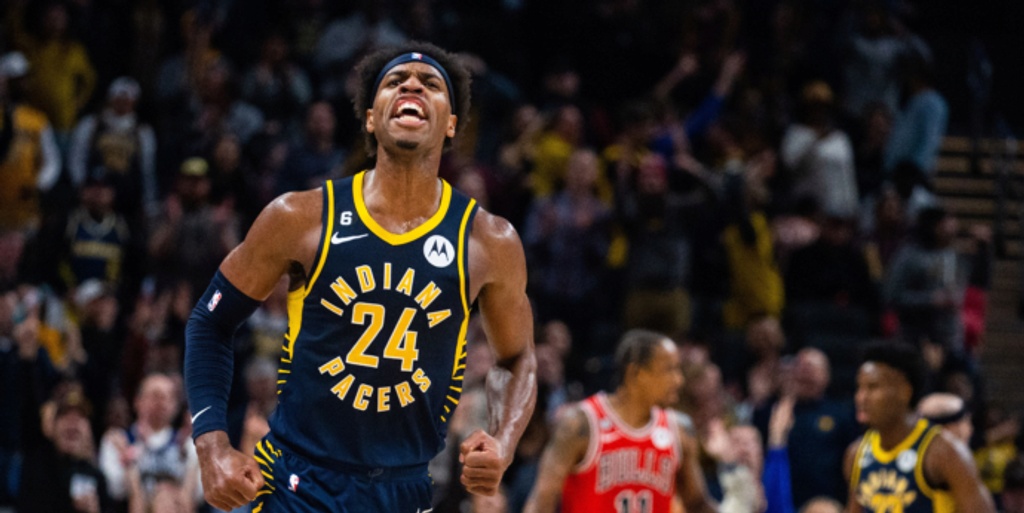 He kept urging his teammates to play hard, to follow the game plan and insisted they eventually could come back. Again. Then the 20-year-old rookie made sure of it.

Mathurin and Myles Turner each scored 26 points and Mathurin broke free for the decisive basket with 29.1 seconds left to give the Pacers a 116-110 victory over the Chicago Bulls on Tuesday night.

“He was the most animated I’ve seen him in the huddles all season,” coach Rick Carlisle said. “He was being encouraging, saying ‘We can do this, we can do this.’ He just brings an indomitable will to compete, to get the ball in the basket and to outwork you.”

Indiana snapped a season-worst seven-game losing streak by rallying from a double-digit deficit to win for the 11th time this season — two of those after trailing by 20 points or more — and barely stayed ahead of 10th-place Chicago in the Eastern Conference. The Pacers played again without injured point guard Tyrese Haliburton and this time without his replacement, Andrew Nembhard, who was sick.

T.J. McConnell had 20 points and 10 assists for the Pacers. But without Turner’s big third quarter and Mathurin playing the role of closer, Indiana wouldn’t have completed the rally.

“A lot of rookies are hitting a wall and losing steam at this point,” Carlisle said. “He’s actually gaining momentum and that’s the most impressive thing about him.”

While the game was physical and sometimes ugly, the Bulls seized control by quickly building a 20-5 lead and extending the margin to 62-41 late in the first half.

But on the second night of a back-to-back, the Bulls wore down in the second half as the Pacers became the aggressors.

“We talk about this at halftime and what we’re getting ready to see happen and what we have to do,” Chicago coach Billy Donovan said before he started gesturing with his hands. “Their intensity was here and ours was maybe the same as in the first half, but theirs was better.”

With McConnell, Turner and Mathurin leading the charge, the Pacers finally responded.

They cut the deficit to 87-80 after three quarters and continued rallying in the fourth, finally taking their first lead of the game, 102-100, on McConnell’s reverse layup with 4:27 to go.

The teams traded leads four times after that and were tied three times — until Mathurin’s layup gave Indiana a 112-110 lead. The Pacers forced turnovers on each of the Bulls’ next two possessions and made four straight free throws to seal it.

Bulls: Zach LaVine had 14 points and Derrick Jones Jr. had 10. ... DeRozan finished with five rebounds and three assists. ... Chicago had 16 turnovers, compared with six for Indiana. ... The Bulls had won the previous four games in this series.

Pacers: Buddy Hield had 19 points, five rebounds, four assists, four steals and four 3-pointers. ... Turner had eight rebounds while McConnell had three steals. ... Indiana was 10 of 37 on 3s. ... Haliburton could return as early as Friday from the sprained left knee and sprained left elbow that contributed to the Pacers’ skid that kept him out of the Indiana’s previous six games.

“T.J. McConnell plays with an annoying persistence that everyone wishes they had on their team,” Carlisle said.