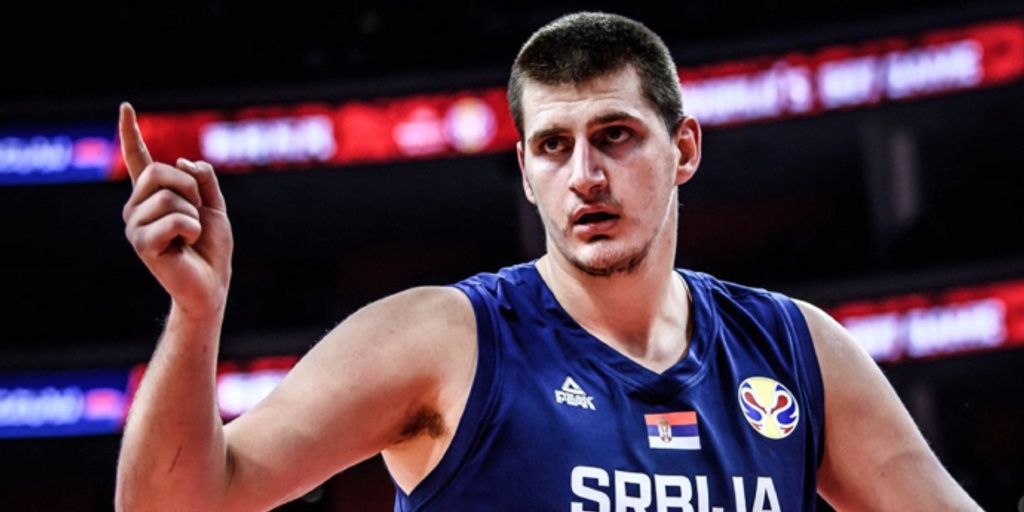 FIBA EuroBasket is making a triumphant comeback this week after five years away from competition. Per ESPN, that's the longest gap in the tournament since World War II, so EuroBasket 2022 should turn out to be a remarkable celebration of basketball's growth across Europe.

A lot has changed in five years. Luka Doncic was the "chosen one" of European hoops in 2017 as an 18-year-old suiting up for Slovenia, Giannis Antetokounmpo had just won Most Improved Player with the Milwaukee Bucks and earned his first NBA All-Star appearance, and Nikola Jokic had yet to clear 30 minutes per game in an NBA season.

Today, the three international stars are among the faces of basketball in the NBA and around the world, and the trio will compete in EuroBasket 2022. That's just the tip of the iceberg as far as the immese talent slated to participate. We've already gotten a peek of what the action could look like via the FIBA World Cup Qualifiers that have taken place over the past week.

EuroBasket features 24 teams in four groups, with action beginning on Thursday and culminating in a gold-medal showdown on Sept. 18. Here's a rundown of the must-see NBA players (as of last season), international stars and top prospects (under age 23) in each group.

(Note: If a player is listed as "questionable," it is because their playing status is uncertain. Not all EuroBasket rosters have been finalized, so several countries' teams may look slightly different. Here is a full roster tracker.)

Spearheaded the Turkey comeback in the third quarter 🔥pic.twitter.com/faBFt2SQLe

Spain and Turkey might not have quite the Tier 1 star power of some other countries, but both squads are fun and deep. Fernandez and Brown are stalwarts who have starred on their respective European teams for years. Then for Turkey, Osman and Korkmaz are NBA rotation players boosted by an electric point guard in Larkin.

We'll hopefully get to see the pair of Houston Rockets sophomore talents as well. Sengun impressed with his flashes last season and has already created highlights with Turkey over the summer. Garuba was quieter as a rookie, but has experience on a large Spanish stage with his time playing for Real Madrid.

Yeah, this group is absolutely loaded. Five of the six rosters could potentially boast multiple players with 2021-22 NBA experience. Slovenia, led by Doncic and Dragic, is considered a favorite to win EuroBasket. But France has a loaded roster (though no Victor Wembanyama), too. They'll be worth checking out additonally because Okobo has been balling in Europe since leaving the NBA.

New York Knicks fans might want to circle Lithuania as the team to watch. They'll receive a nostalgia injection in the forms of Brazdeikis and Mindaugas Kuzminskas, and they'll get a glimpse of the future with Jokubaitis, the team's 2021 draft-and-stash guard. Franz Wagner is one of the best young talents in EuroBasket too, making Germany a team to monitor.

Giannis Antetokounmpo @Giannis_An34 dropped 26pts 7rebs in the @fibawc Qualifiers win for Greece. Watch all the games of the #FIBAWC Qualifiers on Courtside 1891 #WinForAll pic.twitter.com/t7JNIYvGgG

Three of the Antetokounbros (the above two, plus Kostas, who is questionable at this time) could assemble for their home country. Greece also has a handful of international stars who might play; their roster has yet to be finalized. Giannis Antetokounmpo dropped 40 points in a World Cup Qualifiers loss against Nikola Jokic and Serbia, so it's safe to say he's firing on all cylinders.

Croatia, however, might be my pick for most intriguing team in the tournament. They have a trio of NBA players, plus a former top-five pick in Mario Hezonja. Prkacin has been on NBA Draft radars for several years now, and Matkovic just went No. 52 overall in the 2022 Draft to the New Orleans Pelicans. This is a fun mix of talent at different stages and platforms.

They call him the MVP for a reason 🃏

Deadly in so many ways, Nikola Jokic was in top form for Serbia during World Cup Qualifying 😤#FIBAWC x #WinForSrbija 🇷🇸 pic.twitter.com/1ZqvDPLQsi

Nikola Jokic instantly makes Serbia a frontrunner for the gold, but the nation could have several veterans backing him up in a potential deep run. Micic in particular should be on NBA fans' radars as a player who could immediately come over and produce in the league. The 28-year-old guard won two EuroLeague titles and was named MVP in 2021. Oklahoma City currently owns his draft rights, though he was mentioned frequently in offseason trade rumors.

Israel has a pair of notable young talents leading the way. Deni Avdija took a legitimate step forward in his second year with the Washington Wizards. Madar, meanwhile, has been playing overseas as a draft-and-stash prospect selected by the Boston Celtics in 2020.