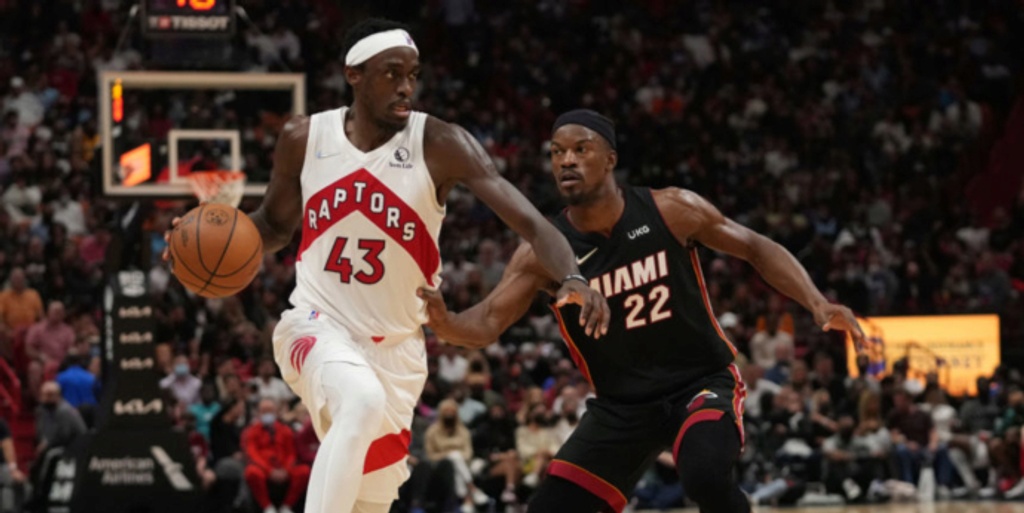 The Toronto Raptors are 6-3 to start the new year, and they ripped off five straight wins to open 2022 before hitting a buzzsaw section of their schedule: Phoenix, Milwaukee, Miami and the Dwane Casey blood-feud Pistons (Detroit is 8-2 against Toronto during Casey's tenure) in the span of a week.

Fred VanVleet has put forth an All-Star caliber season, continues to play top notch defense and has somehow turned out to be the best player from the 2014 Wichita State vs Kentucky game, which I still find mind boggling.

OG Anunoby has shown flashes as an on-ball creator and shot-maker, while still playing stellar (although slightly less consistent) defense. A tamped down role appears to be on the horizon, which is not a bad thing!

Scottie Barnes has blown me away as a rookie compared to what I thought he'd be coming out of Florida State, continually finding a random avenue to explode into developmentally.

Precious Achiuwa is doing intriguing things defensively and a lot of things offensively. Gary Trent Jr. has improved as a defender markedly as well. This team has so much going for it in a year predicated on development and finding a new direction as an organization post-Kyle Lowry.

Somewhat lost in the sauce has been the exceptional play of Pascal Siakam.

Siakam had a rough start to the year coming off of surgery to repair a torn labrum, missing training camp and the preseason, not seeing court time until early November. His defense was notably off and inconsistent compared to his usual self (as was the entirety of the Raptors' defense, to be fair), and his relatively subpar play by his standards drew the ire of fans amid a rough stretch after returning.

Well, after finally settling into the season, finding his place again in the offense, his footing on defense and re-establishing his comfort as a ball-handler, Pascal Siakam is playing at an All-Star level and putting forth one of the best stretches of his career.

Siakam has dazzled since returning from health and safety protocols after Christmas, maintaining a career-high assist percentage (29.1%) and assist-to-usage rate (1.04, 88th percentile per Cleaning the Glass) across his last 11 games, and has greatly impressed as a playmaker.

Pascal has shown his proficiency as a driver as he ascended in prior years, using his burst and a herky-jerky, jittery nature to craft and bully his way to the rim. He's thrived out of the mid-post, and mashing these two areas of his game into one realm has created some fantastic middle-of-the-floor passing windows for him.

He's seemingly found more comfort handling help and traffic in the paint, which — along with his proficiency facing up and taking defenders off the dribble — creates an ability to pick apart defenses with more regularity. Particularly against Miami and Milwaukee in recent outings, two teams who love to send two to the ball, Siakam was able to showcase this (he finished with 10 assists in both games).

The Raptors have been a rather pick-and-roll averse team this season, and during Nick Nurse's tenure, much to my chagrin.

That changed up the past week, as Nurse funneled more of the offense through Siakam on the perimeter, giving him countless opportunities to attack defenses with ball-screens. As a team that's comfortable playing without a center, and Siakam oft being the tallest player on court for the Raps, it creates many chances to get a little funky in the half-court when considering the size and skill sets Toronto employs together.

Put a mobile center like Deandre Ayton in a ball-screen, and Siakam is capable of using his downhill gravitas and angles to force him into a losing game on the backfoot. Switch a smaller wing to save your big, and Siakam will back them down into post or overwhelm them with power to get to the rim. Trap him on the perimeter, and he's capable of keeping the ball moving and making the defense pay.

I simply never thought I'd see a world where we got to see Pascal Siakam reject a screen and throw a dart of a pocket pass on the drive, but here we are!

Pascal's playmaking has been legitimately impressive, and the gumption he's shown as a scorer out of pick-and-roll is so enticing to what he could do for the offense with a more routine diet of reps running offense from the perimeter.

However, his utility as a screener and in two-man games alongside other handlers is what sent me to a higher state. Siakam's blend of size, speed, strength, vision and scoring make him viable as a ball-handler, yet all the more devastating as an outlet.

I wouldn't necesarily consider Pascal a great screener when diving into the nuance and technicality of it, but his threat as a popper and roller make him lethal when involved in screening actions.

The intersection of his skillset with VanVleet's prolific shooting is a headcase for defenses, as actions involving the duo create a torsion in the defense, twisting the arm of opposing defensive coordinators.

Siakam has shot much better from three lately, but is still below average on the season and the past two years. However, it is near impossible for defenses to resign themselves to not guarding him in the slot or on the perimeter when he comes off a screening action. A quick swing to a wide open Siakam with momentum driving to the rim after sending two to the ball is a recipe for free throws or another kickout to keep the defense spinning.

In straight-up rolling opportunities, Pascal's fluidity into rolls is remarkable. It sounds like a minor thing, but being able to quickly get off a screen into the paint (emphasis on quickly) is major. In a way, it opens up even more of those mid-post looks he feasts on, but against a bent defense with help already drawn.

Not every team is going to send two to the ball on the perimeter, but the point remains: involving Siakam in pick-and-roll makes good things happen! Getting creative with how and where Pascal gets the ball has led to better and more effective offense for the Raptors and Siakam individually.

While VanVleet has on balance been the best player for the Raptors by a wide margin this season, Siakam has been neck and neck with him since Christmas. It's been awesome to see him find his groove after some rough stretches the past two seasons. While I personally wouldn't have him on my All-Star ballot due to time missed and inconsistent play early, he's making it very hard to keep him off.

As Toronto looks to push for a secured playoff spot during the second half of the season, the team will need continued high-level play from its star forward, and continued willingness to throw things at the wall offensively from the coaching staff.