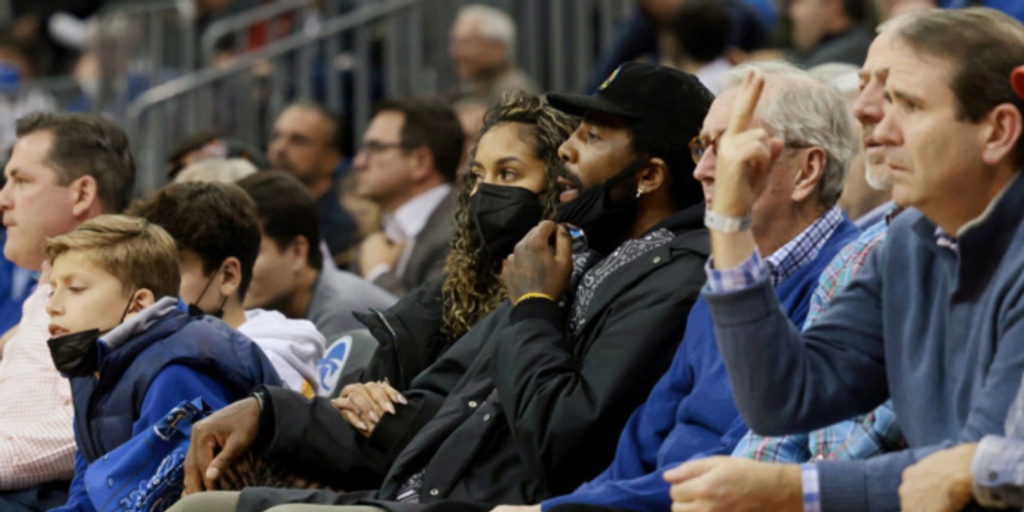 The Nets should be ashamed of themselves

Kyrie Irving is back.

The Athletic’s Shams Charania dropped the first bomb, reporting that the Brooklyn Nets star was ramping up for a return. The news sent shockwaves through the online NBA community, but it also raised questions.

Chief among them: if Kyrie’s ramping up for a return, what changed?

ESPN’s Adrian Wojnarowski answered that question not too long after the Shams tweet. He reported that Kyrie has still refused to be vaccinated, though the Nets were going to allow him to return as a part-time player as a response to the Nets’ current roster situation.

They’re missing a chunk of folks right now, highlighted by fellow star guard James Harden, due to a mix of injuries (get well soon, Joe Harris) and players in the league's health and safety protocols. The Nets needed reinforcements, and they specifically wanted to take some of the creation load off of Kevin Durant’s shoulders.

Steve Nash has shown worry about Durant’s workload as of late — he hasn’t averaged this many minutes (37.0) since his age-25 season (38.5 in 2013-14) — and it makes sense. You need Durant’s brilliance for the postseason; burning him out as a high-minute, high-usage, high-volume leader of eight-man rotations is not the ideal path.

But folding to Irving’s reluctance to fully commit to the team? It’s shameful.

The roster is gutted in large part because of COVID. Cases are spiking right now, with multiple teams — across multiple sports, for whatever that’s worth to you — dealing with mass breakouts. Not only have the Nets decided that bringing an unvaccinated player into the fray makes sense, they’re contradicting themselves in the process.

“Kyrie has made a personal choice, and we respect his individual right to choose. Currently the choice restricts his ability to be a full-time member of the team, and we will not permit any member of our team to participate with part-time availability.”

These are the words of Sean Marks, the Nets’ general manager. A general manager that has done a fantastic job of rebuilding the Nets after the Billy King era. He’s saved, then transformed the roster since he took the job in 2016. Beyond that, he has established — by many accounts — one of the best cultures in the NBA. It’s part of what made Durant and Kyrie interested in signing with the Nets in the first place.

You can’t build any sort of culture or relationship without an element of trust. You can’t establish trust without a baseline of respect. A baseline of honesty. Your name — your word — is all you have when you strip the extra curriculars away.

What kind of message is Marks — are the Nets — sending with this decision?

To fold to this degree, smack dab in the middle of a COVID breakout, is a massive red mark on the resume. It doesn’t seem smart. It doesn’t seem safe for anyone involved. And honestly, it doesn’t even seem totally necessary.

Bless Woj for doing his job, but to frame the decision with the kind of woe-is-Nets fluff he put out there is disingenuous at best, dangerous at worst.

There are hardship exemptions available for short-term help; Langston Galloway just provided solid minutes last night, for example. For a contending team like the Nets, hitting on the margins of the roster is important in the short- and long-term.

You don’t want it to come under these circumstances of course, but it’s probably a good thing that your draft class (Cam Thomas, Day’Ron Sharpe, Kessler Edwards and David Duke Jr.) is getting regular-season reps. You’re going to need those guys down the line — to extend the contention window, or to intrigue other teams enough to make them tradeable to acquire guys that can extend the window.

And as rough as the Nets have had it in terms of roster luck, they have the best record in the East by 2.5 games. It’s not like they made this decision because they were sliding in the standings and desperately needed a star-punch; they’ve won four straight with a relatively soft slate leading into their Christmas Day matchup with the Los Angeles Lakers.

They have a great record and a cushion, and the four teams behind them (Milwaukee, Chicago, Cleveland, Miami) are all dealing with their own COVID/injury issues.

There was just... no real need to make this move.