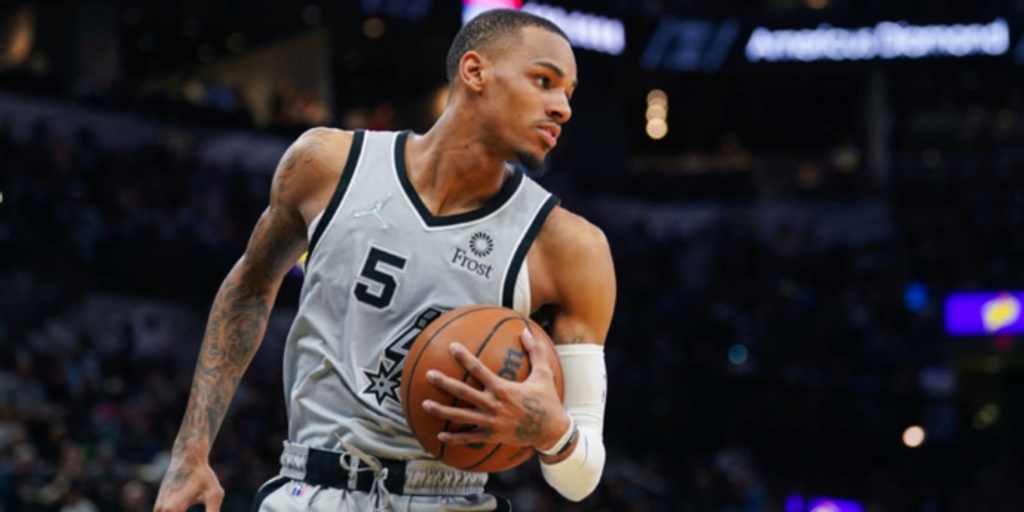 The Lakers might be collapsing, but let's give credit to the Spurs

Just two weeks ago, the San Antonio Spurs were 27-44, two-and-a-half games out of postseason positioning and three games behind the Los Angeles Lakers in the Western Conference standings.

The Lakers' failures have been the dominant headline of this year's playoff race. However, their epic meltdown is overshadowing a Spurs team that capitalized on an easy stretch of schedule to go 6-1 in the past two weeks and surge to the No. 10 seed.

San Antonio boasts a fifth-ranked offense and defense over that time, according to Cleaning the Glass. Sure, three of the wins have come against the Portland Trail Blazers, and a fourth victory versus the Houston Rockets; however, the Spurs have also downed Golden State and New Orleans — and even fighting tooth and nail in a one-point loss against second-seeded Memphis is commendable. This roster features just two players over age-26 in Doug McDermott (30) and Josh Richardson (28).

For a team that has appeared well out of contention all season, the Spurs have displayed impressive resilience with this late run.

Any praise starts with Dejounte Murray, who is simply a full-blown superstar. The 25-year-old kicked his All-Star season up another notch in March, putting up 25.6 points, 8.8 rebounds and 8.6 assists per game with a 57.5% True Shooting percentage. Then, on defense, he led the NBA with 4.7 deflections per game.

Murray averaged 92.6 touches per game last month — third in the entire NBA — and sported a 33.5% usage rate, in the 81st percentile among point guards. His assist rate (39.3%) is in the 88th percentile post-February, and it underscores the success Murray is having with tremendous responsibility as an engine.

Against the Pelicans, Murray racked up 13 assists against 2 turnovers. He often simply made the right pass, and on other plays, he showed off the vision and control that has come to define his methodical tempo.

Murray may be the fulcrum, but he isn't carrying San Antonio. The Spurs missed him for the past two games due to illness, yet still soundly thrashed Portland twice. They beat New Orleans on a night where Murray had those 13 assists but shot 4 of 19 from the field.

Tre Jones subbed into the starting lineup for Murray in those two wins against the Trail Blazers, handing out 16 assists without turning the ball over once. Jones has a scintillating 62.6% True Shooting percentage and a 6.40 assist-to-turnover rate during the seven-game run.

Keldon Johnson has shined as the team's second-leading scorer at 22.0 points per game. He has reasserted himself as a powerful driver while canning 47% of his corner threes over the past seven games. The drive-and-kick game has also shined.

Johnson is already a reliable driver who continues to improve. Since March 1, his overall turnover rate has dropped to a pristine 7.0%, while his assist totals have gone up. The reads that the 22-year-old has made out of his attacks have been quite impressive.

It feels like the young core is rising collectively on the score sheet. Devin Vassell has knocked down 37.0% of his three-pointers since the All-Star break, showing off the pull-up savvy that made him a 2020 lottery pick. Zach Collins has returned from lengthy injury absences to back up Jakob Poeltl and help San Antonio post the second-highest offensive rebound rate in the NBA over the past seven games.

Even 19-year-old Josh Primo, the youngest player in the NBA, has stepped in as a starter over the past eight games. He hasn't been an efficient offensive contributor, but Primo is still playing 27.2 minutes per game for a Spurs team that is winning when it counts. That's meaningful development.

Seven different Spurs have logged a 15-plus-point outing during the 6-1 run. Five others have scored between 10 and 15 points at least once. Regardless of the context or competition, it's fun to see so many players impacting the point total.

On defense, San Antonio has arguably played even better, and it starts with Poeltl. The 26-year-old has already faced the most at-rim shots in the league this season and performed admirably. During the recent winning stretch, Poeltl has faced 7.7 shots at the rim per game. Opponents are shooting just 45.7% on those attempts — the lowest rate against any player facing at least 5 attempts per game in that span.

Overall, the Spurs have held their opponents to just 54.1% shooting at the rim over the past seven games, per Cleaning the Glass, by far the league's lowest rate in that span. Teams have struggled to get out and run on San Antonio, and when stuck in a half-court game, the Spurs have allowed the fifth-fewest points per half-court possession.

In short: It's been a fantastic run, and it's placed all the pressure on the Lakers to change their fate.

L.A. is 4-16 since the All-Star break with the NBA's second-worst defensive rating. The Lakers still have to face Phoenix and Denver, two top-10 offenses on the season, along with the Warriors and Oklahoma City Thunder. The Lakers must win at least two games to even have a mathematical chance at the No. 10 seed, and even if they somehow won out, San Antonio would then only need to win two games (the Spurs hold the tiebreaker).

The Spurs have a difficult road ahead against four West playoff teams in the Denver Nuggets, Minnesota Timberwolves, Warriors and Dallas Mavericks. Does San Antonio's recent hot stretch provide enough momentum to split the schedule? Do the Lakers have anything left in the tank to apply pressure?

Regardless of the outcome, Gregg Popovich and his staff should take pride in how the young Spurs have fought for their spot in the postseason.