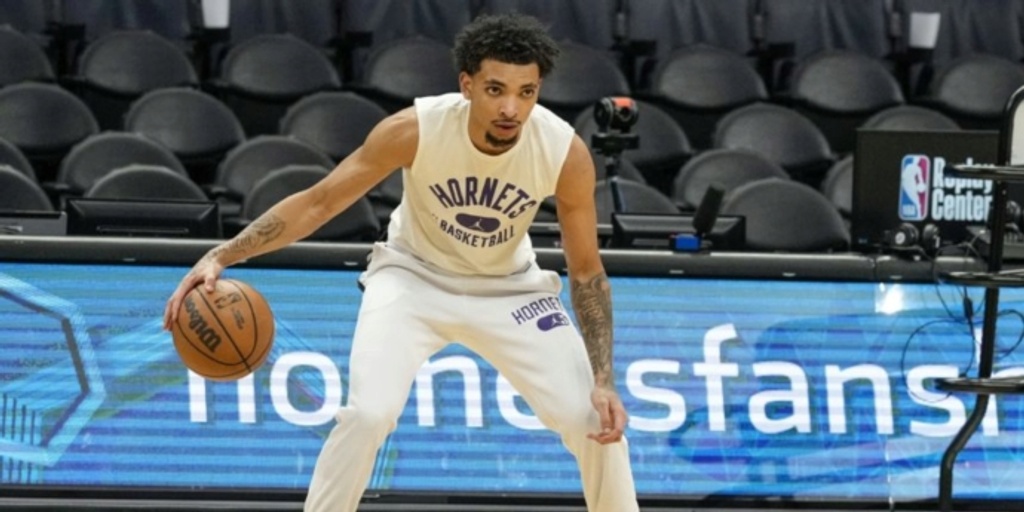 The curious, frustrating case of James Bouknight's lack of minutes

Adversity is about to hit the young, surging Charlotte Hornets at an inopportune time. Now, the question is how will the Hornets’ locker room hold on throughout this potentially tumultuous period?

Losers of four straight games for the first time since the beginning of November, Charlotte has fallen from the No. 6 seed down to No. 9, squarely within the Play-In shuffle. The Eastern Conference is stacked to the gills this season, and any false steps down the standings could be costly later on.

Charlotte’s schedule sets up for a prove-it type of period heading into the All-Star break: Toronto Raptors, Chicago Bulls, at Detroit Pistons, Memphis Grizzlies, at Minnesota Timberwolves, Miami Heat. Five of those six teams are slotted in the playoffs right now, so Charlotte needs to put the pieces back together to prevent further slippage.

On Saturday, an interesting situation occurred on the Hornets’ bench during a blowout loss at home against the Heat. Head coach James Borrego appeared to have said something to rookie shooting guard James Bouknight that he took offense to, standing up and getting in his face. LaMelo Ball quickly helped break up the conflict on the bench, but Bouknight walked back to the locker room with a Hornets assistant coach. Bouknight’s only minutes during this game were fewer than a 60-second span, which is just so head-scratching.

The No. 11 overall pick in the 2021 NBA Draft, Bouknight has been a forgotten about prospect within the strong rookie class producing on the court this season. Only appearing in 25 games and averaging 10 minutes, Bouknight has been on the outside looking in with Borrego’s rotation. It seems like this has festered and finally boiled over this past weekend for a frustrated lottery pick not being utilized.

“Obviously we were all a little frustrated, all of us,” Borrego said about what happened with Bouknight. “In the third quarter, early fourth and it got a little emotional there. Beyond that I’ll leave it there.”

Dunno what was said but here’s video of the incident between James Bouknight and Hornets HC James Borrego. https://t.co/QiECLLLjPq pic.twitter.com/uyGiYz2JK9

Meanwhile, Bouknight was not made available to the media postgame. Unfortunately, we weren’t able to hear Bouknight’s side of the story, but we soon should, and it’s fair to read between the lines here on why exactly it occurred.

“As I’ve said before he’s in a tough spot,” Borrego said. “He obviously wants to play. I get that. I understand that. Look, he’s a kid that we believe in, we trust in and we are going to find more minutes for him, more time. So I won’t get into the specifics. Just two competitors trying to help this team.”

Bouknight’s raw numbers on the stat sheet paint a completely different picture than what actually happens when logging real minutes. The former UConn Husky is averaging 4.8 points in 10.0 minutes per game. However, in the five contests Bouknight has logged over 20 minutes, the splits are very promising: 15.8 points, 4.4 rebounds, 59.3% True Shooting percentage.

Charlotte couldn’t pass up on the talent of Bouknight when he slipped to No. 11 overall. There was smoke pre-draft that Bouknight could have been drafted within the first five selections thanks to his NBA-ready scoring package and explosiveness.

“An explosive vertical athlete, crafty finisher around the rim, and assertive scorer. James Bouknight is capable of filling up a box score with points in the blink of an eye. Although he needs to improve as an outside shooter, he has the potential to become a primary offensive option in the NBA and should have a solid career.”

On the Hornets’ roster, there are plenty of guards who need to be fed shots. Ball is an obvious one with his all-around brilliance and being their true foundational building block. Terry Rozier recently signed a long-term extension, and he’s someone known as a bucket-getter. Kelly Oubre Jr. is the exact same way, someone who is a rhythm scorer capable of chucking at will.

Cody Martin has been a surprise for the Hornets this season within their guard/wing rotation as well, shooting over 40% from three-point range while providing two-way versatility. The one player who could be questionable with more playing time over Bouknight is longtime veteran point guard Ish Smith, who has appeared in 10 more games than the rookie shooting guard.

As you can see, the Hornets have a real glutenous amount of high-usage scorers who are ahead of Bouknight, and he should soon fill into that same role as well.

This is another intriguing factor as to why the Hornets are going to be a team to closely monitor heading into Thursday’s NBA trade deadline. If the Hornets make a win-now move for a center — someone like Myles Turner would take this team to another level — potentially multiple players in front of Bouknight could be shipped out.

For example, a hypothetical deal revolving around =Turner to Charlotte for Oubre, P.J. Washington and a future first-round draft pick could have some legs behind it. Oubre’s departure would be a plus for Bouknight, who would see a bump in his potential to play real minutes when it matters for the Hornets.

For the time being, Bouknight’s frustrations seem very much warranted. When Bouknight receives minutes, he produces well more often than not for an inexperienced rookie. Bouknight is not afraid to shoot, which is what makes him so enticing long-term alongside Ball in Charlotte’s backcourt.