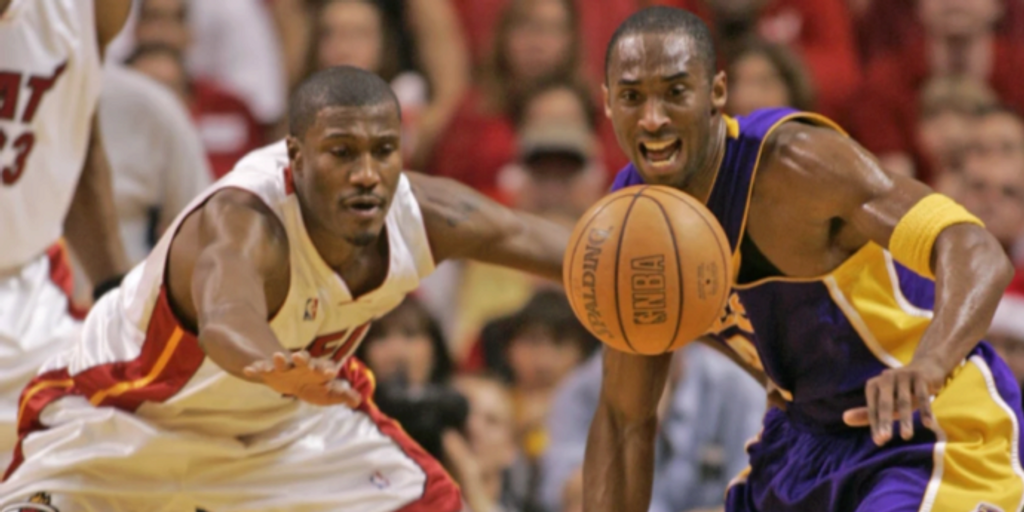 The best Christmas Day ever: Playing Kobe Bryant and the Lakers

As a competitor in the NBA, you want to go out and win every game. But there’s so many of them that it’s impossible to focus too much on any single one.

There’s a few times each season when you have a date circled on your calendar, though. And in my first year in Miami, back in 2005, that game was our Christmas Day showdown with Kobe and the Lakers.

There’s no better feeling than playing on Christmas. It’s kind of like the league’s showcase for the top teams, and when you play on Christmas Day, you know everyone is going to be watching.

By the time I got traded to the Heat in 2005, I’d been in the league for six years, but I’d never played on Christmas Day. When the trade happened, I remember being excited. Even though I enjoyed my time in Memphis, I knew that when I got to Miami, the organization had a championship-or-bust mentality. They just made it to the Eastern Conference Finals where they lost to Detroit in seven games, so they felt like they were really close.

They brought me in along with some other guys hoping that we would help put them over the top, and I knew that those were the expectations going in. I knew I was ready for it.

At that time in the league, Shaq and Kobe’s divorce was still fresh. It happened in 2004, and everyone wondered if they’d be able to win without each other. Their rivalry immediately became “Must See TV,” because it was common knowledge that there was a little bad blood. Especially when they played against each other for the first time.

Part 1 happened on Christmas Day in 2004, and everyone saw their cold embrace before the opening tip. Kobe ended up scoring 42, but missed the game-winning shot. You knew he would be looking for revenge.

The next season, my first in Miami, the league matched us up with the Lakers on Christmas Day again. Only this time, unlike in 2004, the game would be in Miami.

Again, this was my first time playing on Christmas.

I’m so blessed to have had a long career in the league. Including regular season and playoffs, I played in over 900 games. In the NBA, the games just keep coming, so that’s why most players don’t put too much stock in one game. There’s always another one coming at you really fast.

But honestly, I’d be lying if I didn’t admit that I was looking forward to that Christmas Day game. And out of all those games I played, this is one of the few that has actually stuck with me. Off the top of my head, I even remembered what time the game started: 3:00 p.m.

My drive to the arena was a bright, sunny drive that took about 40 minutes. I remember wondering what kind of sneakers Kobe and D-Wade would be wearing. I was also thinking about my former teammates and friends back home and the fact that everyone was going to be watching. I tried to pretend like it was just another game by arriving to the arena at my usual time to workout and warm up, but there was definitely a different buzz that day.

Even though Shaq himself wasn’t vocal about wanting to win this game more than any other, he was like a big brother to everyone on the team. We not only wanted to win for him, but we also wanted to win to prove that we were better than last year.

By this time, I’d already gone up against Kobe a few times, so I had an idea of what to expect. With players like him, you know they’re gonna be coming at you all game long, talking trash and all that. You just hope to make them have to work for their shots and limit their efficiency.

Shaq and D-Wade played well, but it was actually Gary Payton who led us in scoring with 21 points off the bench. He also came to my rescue, truth be told.

With about a minute left in the game, we had the ball, down by one.

D-Wade was in the post looking for his shot, but he drew a double-team.

Lo and behold, he looked out on the wing and spotted me. I had a little bit of daylight. He kicked it out to me for a good look at a go-ahead three, but I rushed the shot a little. Even though it looked and felt good, it was a little short. It caught the front rim, but Shaq got the offensive rebound and found GP behind the arc for a corner three.

GP had a really good game to that point. He nailed the shot to give him 21 points, but most importantly, redeemed me for missing. Haha. It put us up for good with just over a minute left.

At that point, we only needed a few stops, and we got them.

On the biggest sequence, GP fought over a screen to defend Kobe on a game-tying three with less than five seconds to go.

And guess who got the rebound?

The shot was well short and I chased it down before getting fouled with about a second left. Fortunately, I made both the free throws to give us a five-point lead and seal the game for us.

I had to go look up the stats and watch a YouTube video or two to remember all the details from the game, but one thing I’ll never forget is what it felt like to compete on that stage with those guys. Christmas Day is the NBA’s showcase, and I’ll never forget the first time I had the honor of being a part of that.

This year, I’ll be looking forward to seeing Steph Curry and Chris Paul go at it, yet again, and I’ll certainly be thinking about the memories I have from my day.