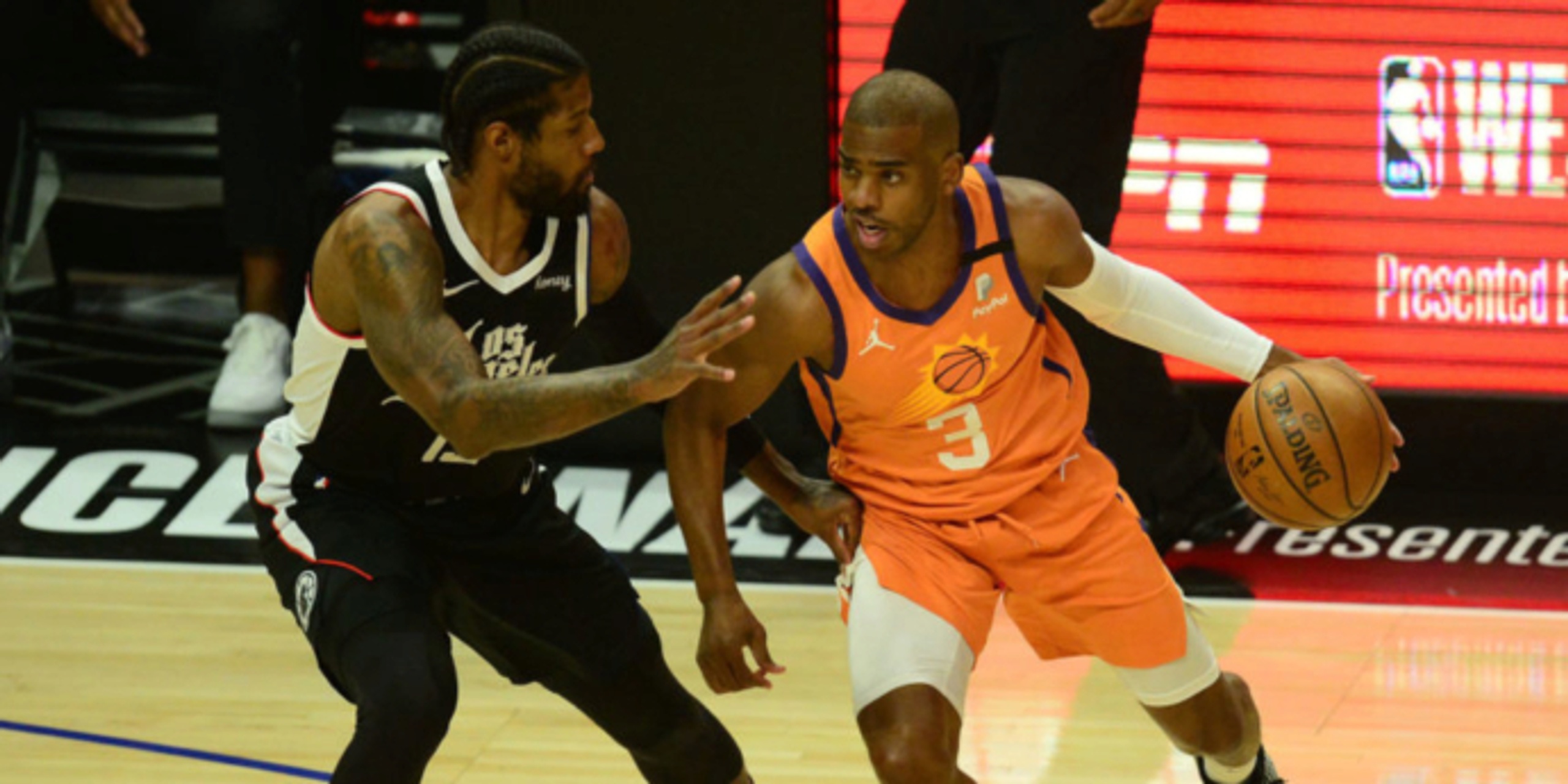 LOS ANGELES (AP) — Tears welled in Chris Paul’s eyes. A message in black ink on his shoes said it all: Can’t give up now.

In his 16th season, Paul led the Phoenix Suns into their first NBA Finals in 28 years, beating the Los Angeles Clippers 130-103 on Wednesday night to close out the Western Conference Finals in six games.

Paul scored 41 points and Devin Booker added 22 to send the Suns to their third Finals appearance in franchise history. They will face either the Atlanta Hawks or Milwaukee Bucks, who are tied 2-2 in the East finals.

Paul reached the NBA Finals for the first time on the same Staples Center court where he helped bring the Clippers to respectability over six seasons that ended in 2017. The 36-year-old guard punished his old team with 31 points in the second half and tied his playoff career high of 41 — the same amount Paul George had in pushing the Clippers to a road win in Game 5.

“I’m just so happy for all the people around me,” Paul said on the court after the game, “and the Clippers are my family, too. These fans, Billy Crystal, that’s my family. This is a team I have the utmost respect for, I’ll always be a Clipper.

“This is what we set out to get tonight, so we didn’t want to go back to Phoenix without it,” Booker said.

Phoenix is the first team to reach the NBA Finals after a 10-year playoff drought. The Suns last made the NBA Finals in 1993, when they were led by Charles Barkley and lost to Michael Jordan and the Chicago Bulls in six games.

Their only other Finals appearance was in 1976, a loss to the Boston Celtics in six games.

Things got chippy in the fourth. Going into a timeout with 5:48 remaining, Paul stared at Patrick Beverley as he walked by. Beverley turned around and shoved Paul hard in the back, sending him to the floor. Beverley was ejected.

Marcus Morris led the Clippers with 26 points despite playing with a sore knee. George had 21 points and nine rebounds coming off his career playoff high that staved off elimination and brought his team back home for another chance.

But the exhausted Clippers — who rallied from 0-2 series deficits in getting to the West finals for the first time in franchise history — had little left in the tank. They were again without two-time NBA Finals MVP Kawhi Leonard, who has been out with a right knee spain, and center Ivica Zubac. He missed his second straight game because of a MCL sprain in his right knee.

Leonard moved from a suite to the bench for the game, his eyes staring from behind a black mask.

Paul dominated over the end of the third and well into the fourth, scoring 14 of Phoenix’s 16 points after the Clippers closed within seven late in the third. He hit three 3-pointers in the final quarter, falling on his back and getting fouled on one of them.

The Clippers briefly re-energized themselves and the fans with a 10-0 run that drew them to 89-82. Morris and Nicolas Batum each hit three-pointers.

But Paul closed on his own 8-0 run, including two three-pointers, that sent the Suns into the fourth leading 97-83.

Booker ditched the clear plastic mask he’d worn to protect his broken nose in the last three games. He got elbowed in the nose defending George at the end of the third, and played with the mask on in the fourth. Moments later, DeMarcus Cousins earned a technical foul for elbowing Paul in the neck.

Phoenix led most of the first half, using runs at the end of each quarter to gain breathing room.

Clippers: George scored at least 20 points in his first 19 games to begin the playoffs.