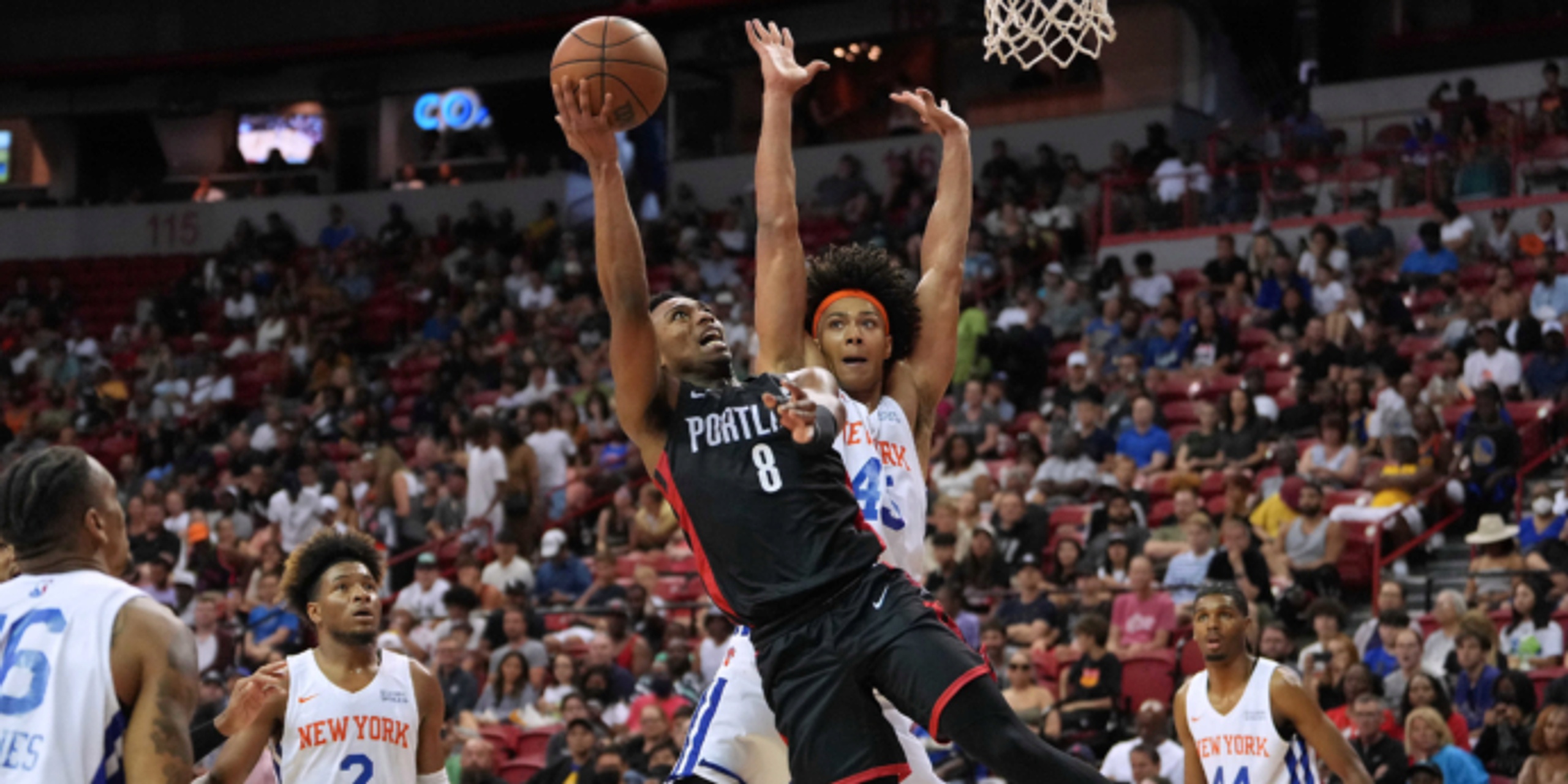 After 11 jam-packed days, another NBA Summer League in Las Vegas has come to a close.

The Portland Trail Blazers emerged as champions with an 85-77 win over the Knicks on Sunday afternoon. But we also had five more games where players made their last attempts to earn roster spots and training camp invites.

With so many top prospects resting, undrafted players took the spotlight. All six of Monday's "studs" went undrafted, but that hasn't stopped them from chasing their NBA dreams.

Here are the final standouts from Las Vegas:

Williams needed this performance badly. After breaking into the starting lineup of an injury-riddled Portland team last spring, his future seemed murky with Damian Lillard and Anfernee Simons both returning. Williams hadn't really stood out in Las Vegas yet, but he led the Blazers to a Summer League title on Sunday.

The 22-year-old was a heads-up playmaker and punctuated his passing with the above play. He also knocked down several self-created shots against tough defense from Deuce McBride and made all 10 of his free throw attempts. While it's unclear what Williams' role will look like in Portland next season, he at least heads into summer break on a positive swing.

Yo this pass from Abdul Gaddy to Gabe Brown in the corner... pic.twitter.com/2jEAvz0mRz

OKC's playmakers were dazzling, and Brown helped them out by finishing off plays. He drilled 5 three-pointers as a floor-spacer and also finished off an alley-oop in transition. Brown also teased a bit of self-creation with a long step-back two and a fast break score he took all the way to the basket by himself. Brown projects as mostly a 3-and-D player in the NBA, but it's a good sign that he can be aggressive in the right moments.

Butler is one of the more bizarre rookies in his class as a 7-foot-1, floor-spacing wing. He had been relatively quiet for most of Summer League, but exploded in a perfect performance from the field. Butler's triples were all of the catch-and-shoot variety, but he did knock down two mid-range pull-ups and finish off a cut with a dun. Butler is too skinny and stiff to be a rotation player at this stage. However, he is one of the more unique long-term bets in the entire league.

At age-26, Stewart is one of the older players in Las Vegas. He showed his experience and poise on drives, where he powered to the basket for strong finishes through contact. Stewart also made high-level passing reads to shooters and cutters off of those drives. He made 245 three-pointers when he played at USC, so the success from distance comes as no surprise. Stewart has never played in the NBA, suited up for three G League teams in 2018-19 and has spent the last three seasons overseas. This game could be a breakthrough moment for him.

Jaime Echenique flies to the rack!

Echenique played all of three minutes for Washington last season but averaged 17.4 points and 10.4 rebounds with the G League affiliate Capital City Go-Go. The center was a bully inside against the Warriors, but he also showed solid touch with floaters and hook shots. He's a sturdy interior presence at 6-foot-11 and 258 pounds. This showed up on the defensive end with Echenique stonewalling driving threats.

Arms' recent basketball career has seen him rise from Mesa Community College, to Northwest Nazarene and Winthrop, to Texas Tech. Now, he's maximizing his chances at the league with Denver. Arms displayed impressive body control on his layup attempts and confidence from beyond the arc. He used some active hands to generate steals and picked up two phenomenal blocks defending around the basket. After going undrafted this June, the 6-foot-6 Arms has a serious shot at sticking around with Denver.

One of the top performers in Las Vegas ended his run on a quiet note. Mamukelashvili was less of a presence as a scorer on offense, though he did try to be a bit more creative. He took the ball coast-to-coast twice and went 1-for-2 on the ensuing layups. Mamukelashvili only played 19:43, so he scaled back in general during this contest. Overall, though, he played an excellent Summer League and is in the conversation for MVP honors.

Nesmith played three Summer League games with his new team after being dealt from Boston in the Malcolm Brogdon trade. The wing ended at 5-for-20 from distance in those contests, but this one was his most underwhelming. And unlike last year's dominant summer showing, Nesmith floundered when he attacked off the dribble, coughing up turnovers with a loose handle and missing shots at the basket.

The 2020 No. 14 pick can absolutely still turn things around, but the concerns with Nesmith on both ends are very real at this point.

Todd's summer showings have wildly oscillated. Unfortunately, this was another valley for last year's No. 31 pick. Todd just doesn't have consistency yet from beyond the arc, where most of his shots came in this environment. He can handle the ball well but does not appreciate contact. He's most successful as a cutter right now. Todd likely needs another season of G League reps, where he admittedly struggled last season.

Like Todd, Watson posted good and bad outings, but ended on a sour note. He displayed flashes of creativity on drives, but didn't show the burst necessary to give himself a quality look. His pull-up game was also shaky and he finished Summer League shooting 2-for-17 from deep. The defensive tools are there, but Watson has a long way to go to take his scoring in particular to the NBA level.