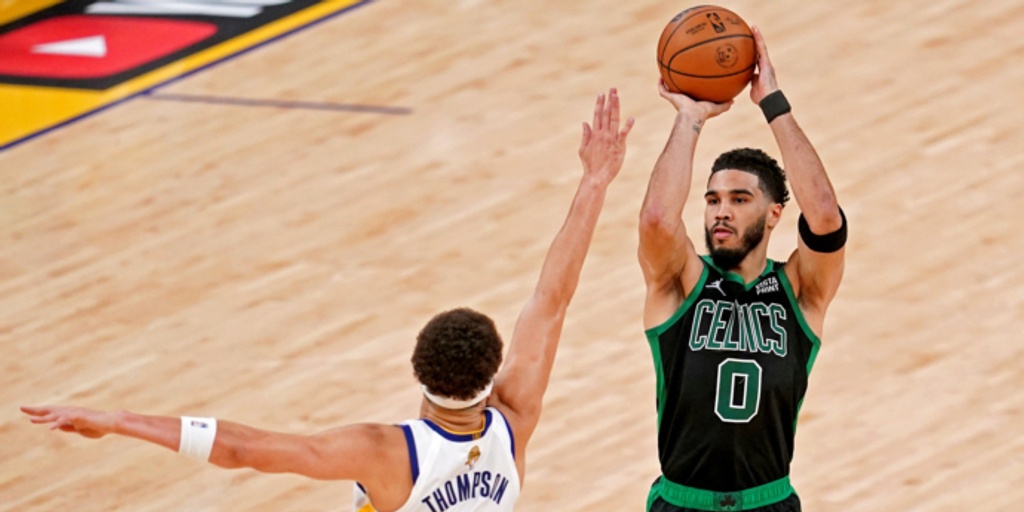 The Boston Celtics couldn’t make a 3-pointer to start the game and found themselves in a deep hole. Then they couldn’t miss and turned the game around.

But when the outside shooting failed them down the stretch, the Celtics had no answer against the Golden State Warriors and now head home on the brink of elimination following a 104-94 loss in Game 5 of the NBA Finals on Monday night.

The Celtics went on an outside shooting rollercoaster ride never seen before in the NBA Finals, becoming the first team ever to miss its first 12 shots from long range and then the first team to make eight straight from 3, according to the Elias Sports Bureau.

They then missed seven straight down the stretch and head back home for Game 6 on Thursday night after first back-to-back losses this postseason. The Celtics will look to turn things around and force a decisive seventh game on Sunday back in San Francisco but will need much more consistency from 3.

The scoreboard mirrored Boston’s outside shooting as the Celtics fell behind 16 points early when they couldn’t make a 3 and then turned things around after Jayson Tatum and Al Horford made back-to-back 3-pointers midway through the third quarter.

Marcus Smart added another one and then Boston made its first five 3-pointers in the third quarter — including three from Tatum — and led 66-61 after a three-point play from Grant Williams.

The Celtics then missed their next seven from long range with the key point coming at the close of the third quarter when Jaylen Brown missed a pull-up with 6 seconds left and Boston was slow to get back on defense, leading to a buzzer-beater from 3 by Jordan Poole that gave Golden State the lead.

Boston’s frustration boiled over early in the fourth quarter starting when Klay Thompson hit a 3-pointer on a play the Celtics wanted a push-off called. Coach Ime Udoka, who got a technical early, got heated with official Tony Brothers during a timeout and it just built from there.

Smart got called for a technical foul of his own on the next possession and then was called for an offensive foul on the inbound pass and a delay of game warning. Poole made a basket at the other end and Boston’s five-point from the third quarter turned into an 85-74 deficit.

By the time Tatum broke the late-game cold spell, it was far too late for the Celtics, who spent much of the fourth quarter complaining.