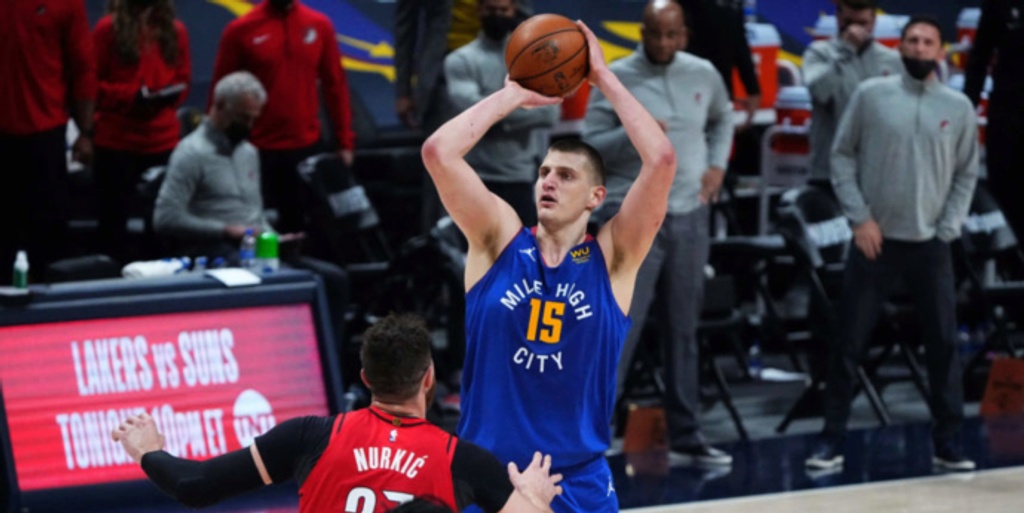 Welcome to your Sunday stats binge!

I've started this column as a diary of sorts, to keep track of the hodgepodge of interesting numbers I come across as a basketball consumer. So many figures fly around in the hoops community, and the endless stream of data can bog down some of the more surprising revelations about the game. The goal is for this column to be a light, yet informative way to pick up details about your favorite teams and players.

We currently only have one major U.S. basketball league in action, and that's the WNBA. I'll be saving some insights for next weekend's numbers-centric playoff preview, but we'll talk a bit about the best shooters in the league this season. This rendition of the stats notebook will be a bit shorter than usual with less basketball going on at the moment.

First, I want to reflect on last year's NBA MVP and argue that Nikola Jokic may still be underrated nationally. People generally recognize the 26-year-old (yep, he's younger than Giannis Antetokounmpo) as an elite passing big man and perimeter shooter. However, Jokic is so much more as an offensive player; in fact, I'm convinced that he's a top-three (at least) offensive talent in the NBA today.

Jokic is elite in nearly every shot context. These numbers below come courtesy of InStat:

That's a lot, and Jokic is consistently near the top. The only places he underwhelmed in from a pure field-goal-percentage perspective were in transition (59.5% isn't that great) and on catch-and-shoot attempts (36%, also decent). If you want to nitpick, he's only scoring with average efficiency for a center around the rim (63rd percentile according to Cleaning the Glass).

According to Sportradar, Jokic also made 64.2% of his hook shots, which ranks second among all players with at least 30 attempts, and behind only Captain Hook himself, Robin Lopez. Per Cleaning the Glass, the Serbian big man finished in the 94th percentile for bigs in mid-range efficiency and the 80th percentile in three-point efficiency. InStat says Jokic also took and made the most contested field goals in the NBA last season, doing so at a 55% clip (2nd among 20 players with at least 1000 contested attempts).

All of this adds up to a 64.7% True Shooting percentage, which slots 15th among Basketball Reference's qualifying players. That's stunning for someone with so many offensive responsibilites. I won't overwhlem you with more, but yes, Jokic can bend minds with his passes. He's also an incredibly versatile scorer.

Let's change direction a bit and head to the WNBA, which is in its final week of regular season action. The league is loaded with elite shooters, and we know Sue Bird is a legend, but I wanted to highlight a few less heralded names that might impact the 2021 postseason. These stats are accurate prior to Sunday's slate:

Allie Quigley, Chicago Sky: The 35-year-old is tied for first in the league with 76 made threes and third with a 44.6% three-point clip. Per InStat, Quigley has taken and made the most shots off screens (41-for-86) among all players and has knocked down 11 of her 22 catch-and-shoot attempts. She's currently mired in a 4-for-16 three-point slump, but Quigley has been a sharpshooter her entire career.

Sami Whitcomb, New York Liberty: As the Liberty flounder on the edges of the postseason race, Whitcomb is canning a career-high 42.5% of her threes as a starter. She's shooting 47.2% on all catch-and-shoot attempts, good for fourth in the WNBA. The 33-year-old is lethal from above the break (42.9%, per WNBA Stats).

Moriah Jefferson, Dallas Wings: It's an extremely small sample (22-for-48), but Jefferson has made 45.8% of her three-pointers this season, good for second in the league. The 2016 No. 2 pick has been a solid low-usage specialist, and her 51.5% clip on catch-and-shoot field goals is tops among players with at least 30 attempts. I'll be interested to see what she does for a Dallas team sneaking into the playoffs.

These are just three names that stood out in the spreadsheets, and I'm excited to follow them as the regular season wraps up.