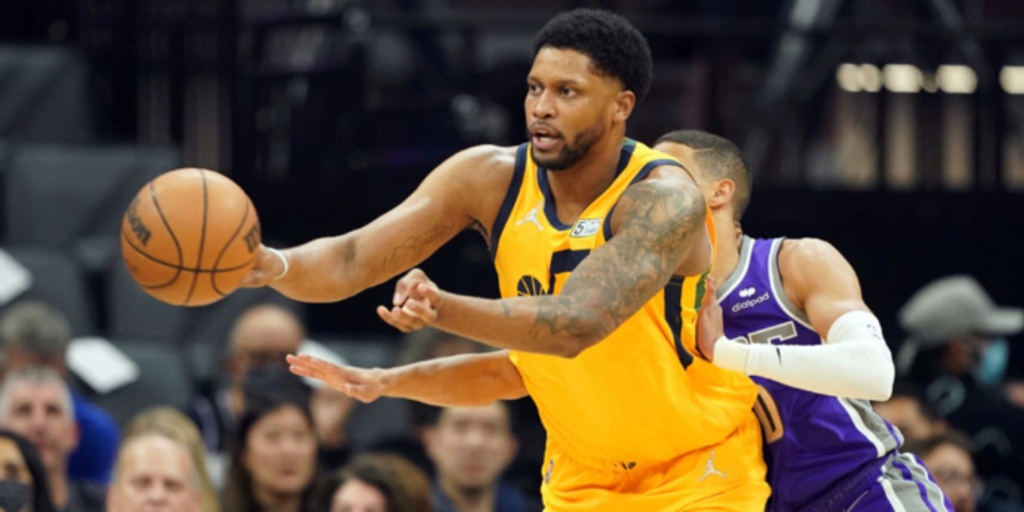 Rudy Gay is injecting the Jazz with funk

Coming off of one of the greatest regular seasons in both franchise and NBA history, culminating in a disappointing early exit in the playoffs, the Utah Jazz entered the 2021-22 season searching for answers.

While inopportune injuries played a part in the off-note Jazz, notable issues that plagued them in past playoff campaigns persisted. Utah lacks size on the wings and defensive versatility, and the ramifications are heavily felt in the playoffs. In spite of Rudy Gobert’s defensive prowess, the holes he covers throughout the regular season are magnified and targeted.

In an effort to revamp the bench and bulk up the roster, the front office traded for Eric Paschall and signed Hassan Whiteside and Rudy Gay. Paschall and Whiteside factored into the rotation immediately this season, but Gay’s impact has been felt to a larger degree, as he’s returned from an offseason surgery to remove bone spurs from his heel.

Some of his limitations have been put on full display in recent games. The Portland Trail Blazers and New Orelans Pelicans routinely targeted him with off-ball actions and pin-downs to force him into screen navigation.

While it’s fair to reason that he may not still have his legs under him (he didn’t play in the preseason and hasn’t even logged 200 minutes yet), getting over a screen is not the 35-year old Gay’s strongsuit.

While he isn’t the answer to all of Utah’s problems, he’s an option to strengthen current options and open new avenues of play.

The minutes with Gay and Gobert together in the frontcourt have been absurdly productive. Per Cleaning the Glass, lineups with both players are outscoring opposition by 24.3 points per 100 possessions, and are among the most effective five-man units in basketball.

As noted above, Gay does have some struggles at the point of attack, particularly against smaller players. But, when playing against larger forwards and bigs, he can capably stay in front of them with his lateral quickness and length. Gay’s also very strong with his size, and the Jazz have lacked players with size, length, and strength; Joe Ingles and Bojan Bogdanovic both have limitations defensively, and have struggles guarding up on bigger 4s and most 5s.

Playing both Gay and Gobert together has led to much more effective and secure switching on 4/5 pick-and-rolls. Gobert has been a capable switch defender for quite a few seasons, and many of the issues that have occurred when he switches (due to prior years) happen on the back end — when he’s out on the perimeter or on a different assignment. Gay can credibly keep some 5s off the glass and jostle for position, and through 10 games maintains the highest rebound percentage of his career (14.8%); lineups with the duo in the frontcourt are in the 99th percentile for defensive-rebound percentage.

The offense between the pair has also been incredibly effective, creating some interesting dynamics. While it would be far-fetched to expect Gay to hold up 43% shooting from deep, he’s fit in well with Quin Snyder’s scheme and is at a career-high 67.9% three-point attempt rate! He still has off-the-dribble juice attacking closeouts, moves the ball well and doesn’t pass up open looks (and will even nail some contested or off the bounce).

The most enticing flashes have been 4/5 pick-and-roll or pop, which the Jazz used heavily against the Cleveland Cavaliers recently.

Gay is still quick enough to take bigger players to the rim off the dribble, a good enough shooter to punish hesitation on the closeout, and a capable enough passer to make the right play if Gobert slips the screen or if the action is well defended.

While the 4 is Rudy Gay’s natural position at this stage, the Jazz have tinkered with looks with him at the 5 (he played sparingly there in San Antonio). There’s less lineup data and film, but the early returns have been encouraging.

Gay at the 5 has strictly been used with Donovan Mitchell as the lead ball-handler in the hopes of keeping Gobert and Conley’s pick-and-roll craft together, and also to open up driving lanes for one of the most explosive guards in basketball.

He’s not the screener or roller that Gobert is, but there are about four players in that stratosphere! What he does bring is a top-notch pick-and-pop threat.

The Cavs greatly struggled with this look, as they have two bigs on the floor nearly every possession. The scramble Utah put Cleveland's defense through felt unfair at times.

Where I have pause is how well these lineups can work defensively. While there isn’t technically rim-protection on the court, it’s less about that, and more about uh... getting any sort of stops. The Jazz could switch most small-to-small actions and switch 4 and 5 to prevent unfavorable perimeter matchups for Gay.

For instance, Rudy Gay can do his job completely on defense, but he can’t prevent or deter Darius Garland dusting Jordan Clarkson. It’s still early in the season, and the Jazz have 58 games to experiment and find what works. However, the roster still quite clearly has limitations. Can lineups with him at the 5 stay above water defensively and play well enough offensively to become a consistent look outside of their base style of play?

Rudy Gay has added versatility to the frontcourt, and provides a punch that makes you think “maybe if...” That infuses the Jazz with a modicum of randomness the team lacked in years prior. It remains to be seen how Quin Snyder will get the most out of his skills and whether the roster allows him to be fully maximized, but the early returns have been encouraging.